It is a Contra-inspired run-and-gun platformer called Kill the Clean Shaven, and it stars this guy: 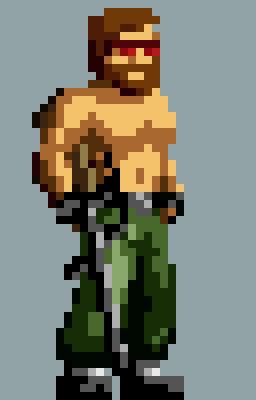 His name is McBeard, and at this point I’m going to quote liberally from the developer’s blog because I’m not a good enough writer to do this justice.

Meet McBeard. He works for a military organisation known as The Beards. He defends the city/world against an organisation that go by the name The Clean Shaven. The game starts in the briefing room. Two of your superiors lead the meeting. They both have unique outlandish facial hair. The briefing is short.

Superior #1: “The city is under attack! Those jerks at The Clean Shaven are running around shooting things with their guns”
Superior #2: “What a bunch of jerks”
Superior #1: “Agreed”
Superior #2: “Alright, of the forty of you here. I want Rugged McBeard, to go down and take care of it. The rest of you are on nap duty. Kick back and give your beards a rest.
Superior #1: Meeting over! 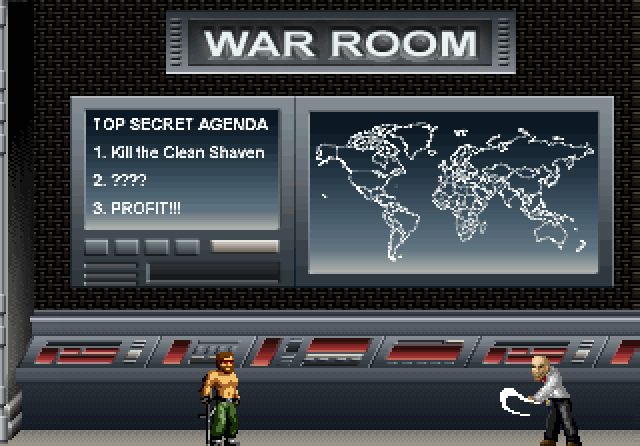 Later, when meeting with a woman wearing a false mustache (who is a representative for The Beards):

Imposter Woman: Come in Rugged McBeard.
Rugged McBeard: Rugged McBeard here.
IW: Fleet Admiral Vanessa Imposteur here.
RM: Fleet Admiral? We’re in THE BEARDS not The Navy. We don’t have a fleet.
IW: It doesn’t matter it’s just a name. THE CLEAN SHAVEN have broken into head quarters. They have disguised themselves with fake beards.
RM: Oh that’s clever.
IW: Yes. Get your ass back to head quarters.
RM: Ass? Don’t you mean beard?
IW: Er… yeah. Beard.
RM: Wait a minute, how come I’ve never seen you before.
IW: I’m so high above you in rank you’ve never seen me before. Got to go. Talk to you later.
RM to himself: There’s something I don’t like about Vanessa Imposteur.

The votes may not be in, but the show must go on! Here we present to you (most of) the GameCola staff's favorite games of 2005.