I am videogames. I mean, not literally—at least, not as far as you know—but what I mean to say is…is…is…is…gosh darnit—writing is so hard!

…Of course, I’m not the first person to discover this. Good writing takes skill, motivation, and—this is where many bloggers struggle—something to actually write about. That’s why, since the dawn of time, we writers have been using idiotic and meaningless phrases like “since the dawn of time” to cover up for the fact that we have no idea what to write. Another well-worn strategy? Distractingly cute pictures of animals. BAM: 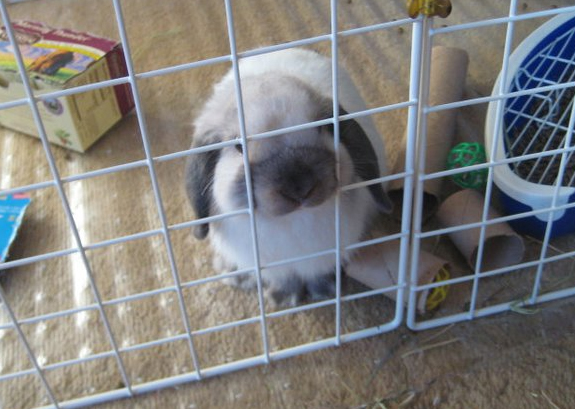 But that’s not all. Another trick from the writer’s playbook is to make up a list. Of something. Anything. It doesn’t matter what. Lists allow us to take up a great deal of space, while still giving the (false) impression that we’ve done any work whatsoever. As an added bonus, in the Information Age, lists also serve another purpose: they allow Internet commenters to engage in their favorite activity (after cute pictures of animals), which is finding really stupid stuff to complain about.

Anyway, my point is this: everyone loves lists, and I need an intro. I’ve also played an enormous amount of XBLI games in the past year. So! Here! Without further ado (a Middle-English word that means “filler”), is:

5. Moon Taxi: It does for audiobooks what Guitar Hero did for rocking.

4. Epic Dungeon: If not for this game, the only thing “uprising” in the “Winter Uprising” would’ve been my vomit.

3. War of Words: Wordplay has never been so much fun! Or violent.

2. Office DisOrders: I now have a professional relationship with the guy who made this game. Also it’s hilarious.

1. Excruciating Guitar Voyage: Literally the greatest videogame ever made.

And that’s it for old videogames. Here’s some new ones.

Get Rich or Die Gaming 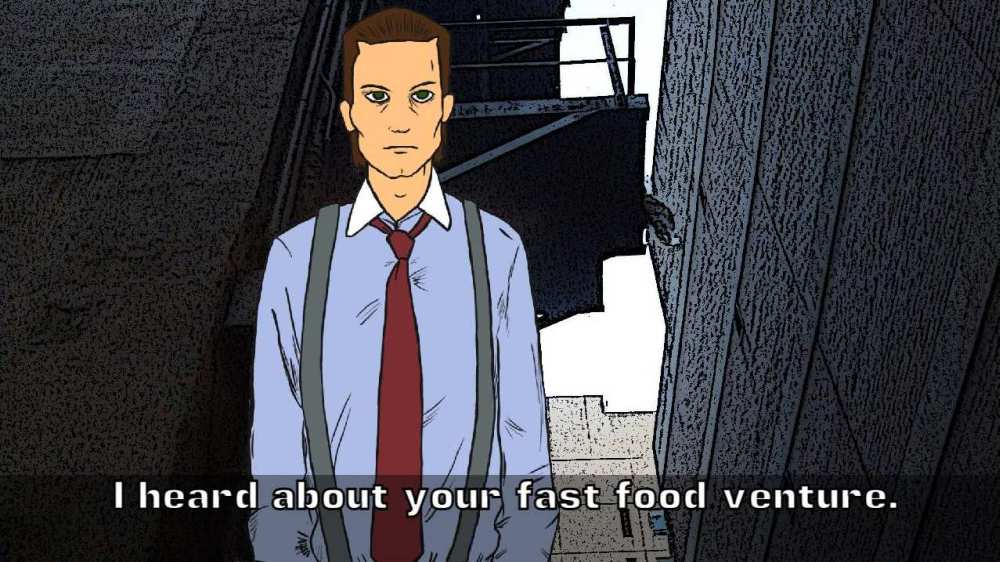 I think…I think Get Rich or Die Gaming is supposed to be an adventure game? But with a lot less wacky item-combining, and a whole lot more wacky penis jokes. You’re Wilson Cooper, a DotA obsesse who’s just been kicked out of his house by his father for playing too many derned videogames. (Harsh!) You’re left to fend for yourself on the streets, penniless. Of course, you turn to drug dealing. Of course. Within minutes you meet up with a guy whose name is—this is the kind of hilarity you can expect from this game—“Adickle Face,” and he’s here to teach you the ways of the “baller.”

For those unfamiliar with the term, the UrbanDictionary.com definition for baller is this: “It started off life meaning somebody who has made it big playing baseball. Now it means whoever uses the word and isn’t mocking it is a fucking idiot.” (Another, possibly more enlightening definition says that a baller is “to be not unlike M.C. Hammer,” as in “Are Those the ballers we saw yesterday? Yea, i think thats Josh Crooch and MC Hammer.” A third definition says that a baller is “an ignorant person who can’t order a sweatshirt.” I could read this site all day.)

From here, the game is apparently all about buying and selling drugs, but my character only got so far as buying and selling—this is true—a McDonald’s cheeseburger, which has surprisingly little pre-owned value. At varying points in the all-too-brief demo, I also was kicked out of a cyber cafe by a large man cosplaying as Pikachu, and I tried to purchase some goods from a veteran drug-dealer, but he wouldn’t sell to me, and he accused my nipples of being a disguised police badge.

I believe the major selling point of this game, as with a lot of adventure games, is supposed to be its world-class humor. Here’s a prime example of the kind of zinger you can look forward to in Get Rich or Die Gaming:

So…yeah. If you’re a fan of those Flash videos whose idea of comedy is South Park-sounding voices, intentionally poor artwork, and non-sequiturs, then say goodbye to your $1! But don’t play for too long, or else you might get stuck on the streets peddling used cheeseburgers, too. 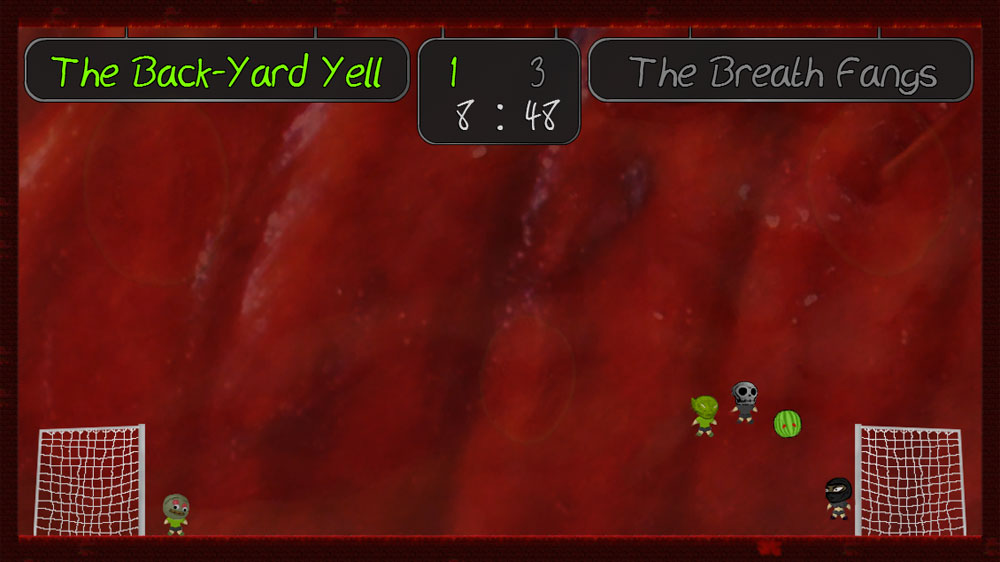 Soccer (defined on UrbanDictionary.com as “the sport of the sexy”) is terrible, and for some godawful reason this is like the fourth time I’m talking about it in this column. I don’t know why it keeps coming up. At least in this version of soccer, there’s no sweating, no grass-stains, and no getting “accidentally” hit in the chefoos by one of your stupid teammates.

In Melon Madness, your ultimate goal is to fling your entire body at the be-eyeballed watermelon until it accidentally lands in the opposing team’s net, which I believe is how the pros do it, too. About halfway through my first game, my team was winning, 6-1. Ask me how many of those goals I scored. Ask me. The answer is two. The computer scored the rest of my goals—and it was the computer for the other team. This is my kind of game!

I don’t think it’s actually possible to intentionally score goals in this game. (In fact, as I put the controller down to write that note, I scored two more goals.) The controls are super, super floaty (to quote the actual developer’s website, “Hey! What happened to physics?! He he!”), and it’s difficult to intentionally do anything, including move. That doesn’t mean the game’s not fun, though; it’s frantic, and hectic, and other synonyms for frantic, and I’m guessing the shenanigans only get wackier the more people you have playing. Though, I wouldn’t know, as my betrothed (UrbanDictionary.com definition: “to be betrayed by plant called cannabis”) still hasn’t forgiven me for making her play Ubergridder.

Watch the trailer for Melon Madness here. If it looks like fun to you, it is; if it doesn’t, then OH MY GOD, THERE’S SOMETHING HORRIBLY WRONG WITH YOUR EYE-BALLS! 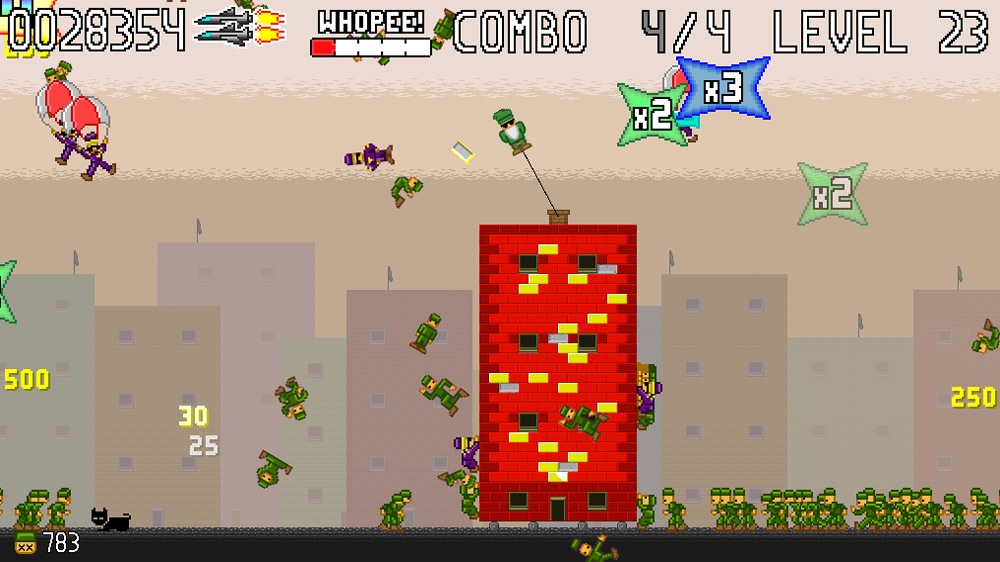 I’ve always been a fan of garden gnomes—last summer, I almost made the two-hour drive out to Kerhonkson, NY solely to see the world’s second largest. However, I’ve never owned one myself, mostly because, as my fiancée puts it, “we don’t have a garden.” Still, there’s nothing to prevent me from playing videogames about them, and, thankfully, one exists. In Garden Gnome Carnage, you play as an actual garden gnome, whose home is under attack by an army of elves. I’m not really sure why; all I know is that it’s of the utmost importance that these elves do not enter our home. How do we keep them out? Well, it’s simple: we tell them that, according to one UrbanDictionary.com definition, the word elf “can be used humerously to describe the size of a man’s penis.”

No, wait! That’s not it! What we really do—and here, I’m being totally serious—is climb up to the top of our building, tie one end of a bungee cord to our chimney, wrap the other end around our ankles, and then jump. This eliminates our problem entirely, because it kills us.

Sorry, sorry! What actually happens next is that we start driving our house back and forth across the screen—did I mention that our house is motorized?—and bunjee-attack all the little elves until they go away. If they start to overpower us, we can also call in an airstrike, which instantly kills everything on the screen. You only have three of those to start with, but don’t worry—if you’re lucky, a fair maiden will pop her head out of a window and offer to bake you a new one.

Also, your building is made out of explosive bricks, which you can dislodge and hurl at your enemies. I love this game.

For the entirety of Garden Gnome Carnage, I never really figured out how to maneuver the gnome, or not accidentally blow up my pet cat with an explosive piece of my house; but it didn’t matter, because I got to use the phrase “maneuver the gnome” in this article. That in itself is worth however many pretend Microsoft dollars the developers want me to fork over, which is 80, which translates to only one real-world dollar, because Microsoft is stupid. What was I talking about again? 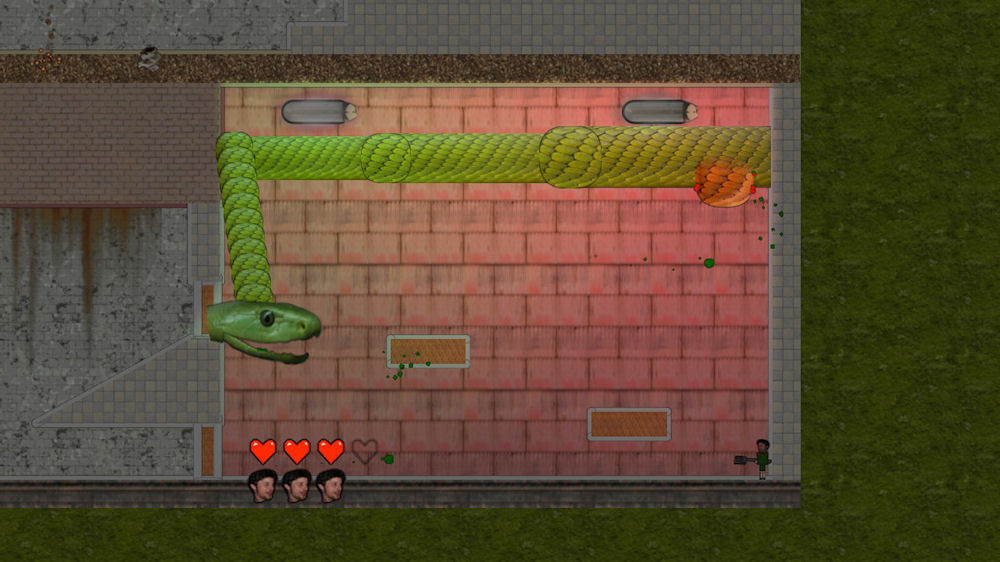 I’d been looking forward to this game like a new Sonic game looks forward to sucking, and with good reason: it’s made by the same superheroes who developed Excruciating Guitar Voyage, which you’ve probably heard of before, if you read my intro paragraph. In fact, Super Janitoroid is actually a spin-off of EVG, starring the character of “the janitor.”

However. This game didn’t really grab me right away, or at all, like EVG did, and I’m pretty sure I know why: it’s a completely different kind of game. EVG is a point-and-click-style adventure game mashed with a platformer, whereas Super Janitoroid is more of a Metroidvania—which, if you’ve never heard the term before, is a clever portmanteau of the NES hit Castlevania and the XBLI game Super Janitoroid. There’s not much dialogue in this game, and there’s little, if any, wacky item-combining—in fact, in my brief time with the game, the entirety of gameplay seemed to be hitting stuff with my broom, and not having the correct key.

But that’s my problem. If you like this kind of game, you may very well like this game. After all, you get to fight a boss named “Pukey Snake” (pictured above), who vomits fireballs at you until you defeat him, at which point he gives you a box of fuses. And, as the great poet “anonymous” wrote on UrbanDictionary.com, the term “snake” can be defined, literally, as:

Aside from (or maybe along with?) being the introduction of Wario, this is a very strange entry into the Mario franchise.