Hello everyone, and welcome to “Minus the Pudding,” where I have to get this intro out of the way now, because I have friggin’ fourteen games to talk about today.

Why’s that? Because today, we’re going to be talking about all of the games featured in the “Indie Games Winter Uprising.” The Uprising (or, maybe THE UPRISING, because how much cooler does that look?) is an attempt on the part of certain XBLI developers to make sure everyone know that, hey, sometimes, good XBLI games are released, too, in addition to all the penis massagers. The way they’re doing this is by flooding the service with a whole bunch of good games, all at the same time, which is pretty much the opposite of what normally happens.

Do they succeed? Let’s find out ASAP, because I’m not really sure if I have the attention span for this. (I mean, seriously…fourteen games!? The most I’ve ever talked about here before is five! What a nightmare.) To make this column more digestible, I’ll be including a “PUDDING” or “NOT PUDDING” rating for each game, with “NOT PUDDING” meaning that it’s an excellent game. I know that’s counter-intuitive, because pudding itself is excellent, but to compensate, I’ll use pretty colors. Don’t worry; you’ll pick it up. 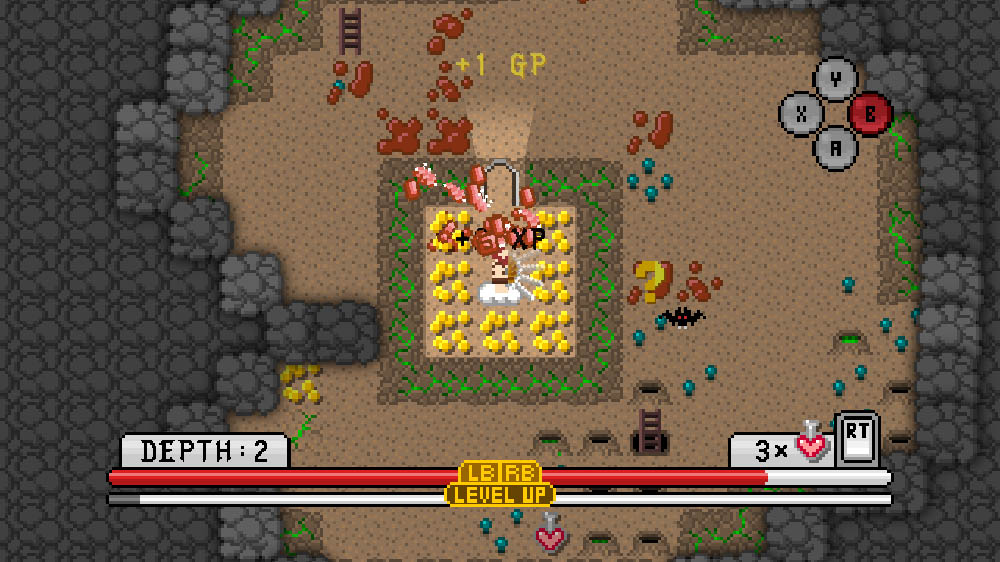 Really? We aren’t finished with the “Epic” thing yet, Internet? We really aren’t? That cake sure is a lie.

Anyway, Epic Dungeon is a roguelike, just like Castle of the Winds, Castle of the Winds 2, and Powder, which are literally the only other roguelikes I know anything about, including Rogue itself. You have four different classes to choose from in creating your character—Berserker, Shaman, Tinkerer, and Gambler— each with their own individual background stories of how they ended up in The Dungeon. I want to give them a “NOT PUDDING!” rating just for that alone; I love that the devs didn’t just go with the standard Warrior/Mage/Ranger trifecta. I chose the Tinkerer, because, seriously, how can you not pick the Tinkerer. He comes with a little robot friend that can zap enemies for you, and his story is this:

“Goodness! It looks like Mother has drugged me and buried me alive again! Oh, how she loves to play tricks on me! Teehee!”

Later in the game, I came across a woman who was looking for the “Toe of Tinkerer.” I admitted to her that I knew a Tinkerer who had toes, and it was me, and she asked if I could have one. I obliged, because the game let me. I gained a small amount of XP for my trouble/horrific pain.

For its sense of humor, and for the fact that I guess roguelikes (though, not rougelikes) are kind of OK, this game gets an official GameCola rating of: NOT PUDDING! 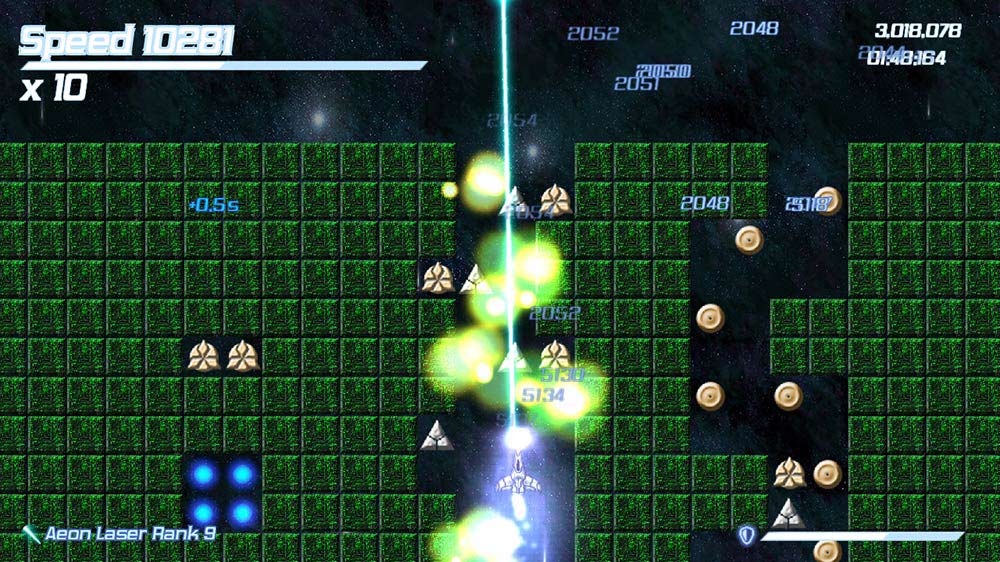 Well, it’s a space shooter, which already comes pretty close to pudding territory for me personally, but it has a few neat gimmicks that separate it from the rest of the Specialty Shops. For one, it’s not sure if it wants to be a vertical space shooter or a side-scrolling space shooter, so it opts for both. At varying points in the game’s levels, there are branching paths you can take that switch your layout from landscape to portrait (or vice versa), allowing you to both experience vertigo, and then have a lie down, after you’ve experienced vertigo.

For two, if you’re good at the game, you get to spend the majority of your playtime zooming through the universe at warp-speed, destroying everyone and everything in your path muahahahahaha!! And also you’re invincible. But only if you’re good. To fill up your invulnerability slash hyperdrive meter, you need to collect these floating blue orbs that are scattered all throughout space; with a little practice, you can play such that you’re constantly running into these blue orbs and constantly destroying everything and you never have to die!

I’m not really one for space shooters, but, since I am a literal baby, I am one for games that actively prevent me from losing. SO! This game gets a rating of NOT PUDDING!

Hypership Out of Control 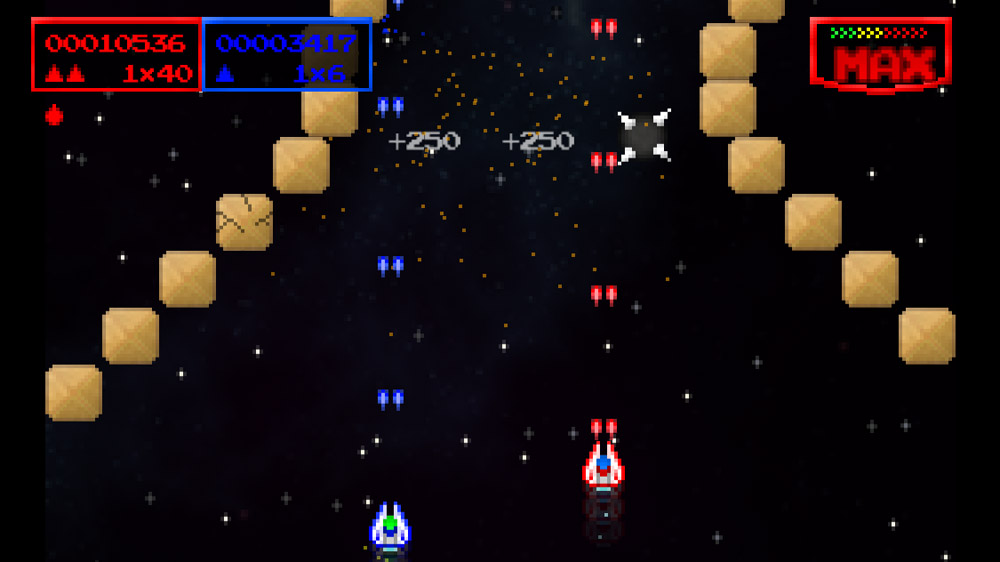 It’s…another space shooter, although it’s a little more retro-looking than Break Limit. I think that’s supposed to be its entire hook, actually—“it looks like an old game!” You know what also looks like an old game? Actual old games, and they don’t cost me anything, because they’re in my attic.

Like I said before, I don’t really like space shooters by default, and this one doesn’t do anything super-exciting like make me invulnerable to death; so, while I’m sorry to say it, we have our first PUDDING. 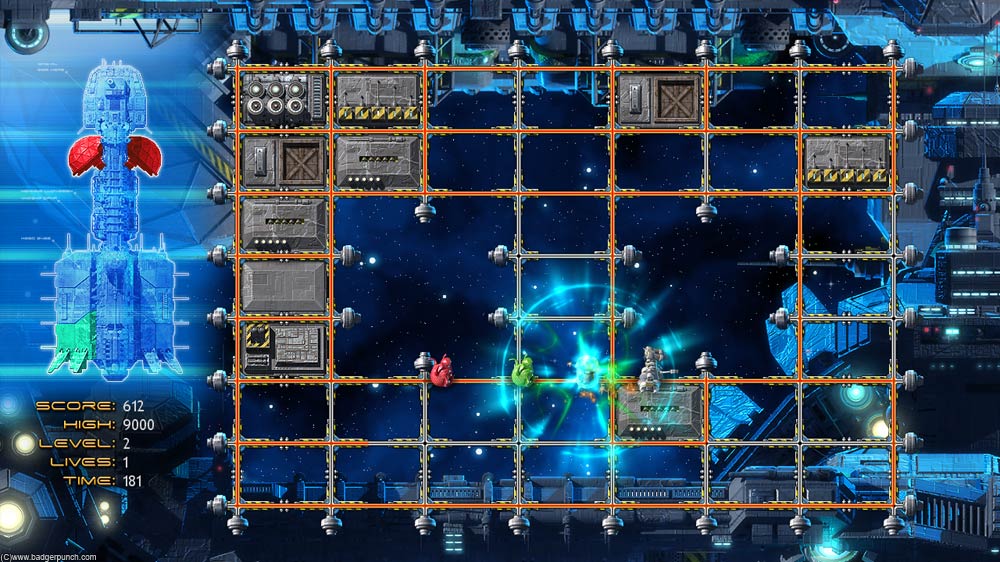 It was kind of a bad omen when I tried watching the trailer for this game online, and my brain immediately started glazing over, as though someone was telling me about this weird dream they had last night. You play as Wall-e (see: the game’s faux-art), and it’s your job to repair a broken space ship, piece, by piece, by piece. By piece. By piece. That’s what the dressing is, anyway, and if you think that sounds boring, you’re one of the lucky ones. You have no idea what boring is.

You see that grid in the above screenshot? In Ubergridder, the entire gameplay is just you traveling along every. single. individual. line. on. the. entire. grid, until you’ve traveled along them all. Then you get to move on to the next level, and you do it again. AND THAT’S IT! THAT’S THE ENTIRE GAME! No, I’m serious! Someone released a game in which your ultimate goal is to just touch every single line on a graph. AND YOU HAVE TO PAY MONEY TO PLAY IT! This game’s not just “meh”; it’s the complete opposite of happiness.

After just a few minutes of Ubergridder, I had to call my fiancee over to see it. That’s right: this game is so bad that you’ll feel compelled to call people over to show them how bad it is. Ubergridder? More like…stupid…gridder. This game has ruined my brain.

PUDDING. Yikes. Wasn’t the point of THE UPRISING to show how great XBLI games can be? 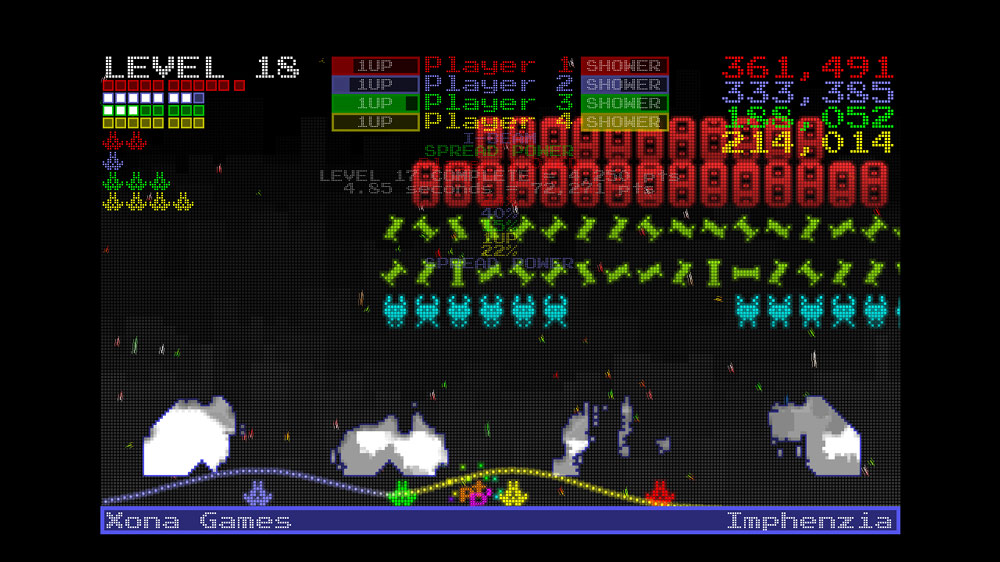 Yes, it’s really called Decimation X3, and I don’t think that’s supposed to be ironic. It’s another friggin’ space shooter, though this one’s much more Space Invaders than the above two Gradiuses. In fact, it pretty much exactly is Space Invaders. Your ship is anchored to the bottom of the screen, and you fly back and forth horizontally while wave after wave of enemies attack from above. There’s a whole bunch of power-ups you can collect—items that increase the spread of your gun, items that give you a shield, etc.—and it’s four player, but…it’s still just Space Invaders. What’s the point? All the particle effects in the world don’t make this any less an Atari 2600 game that’s been remade and re-released more times than the wheel. PUDDING.

Asteroids Do Concern Me 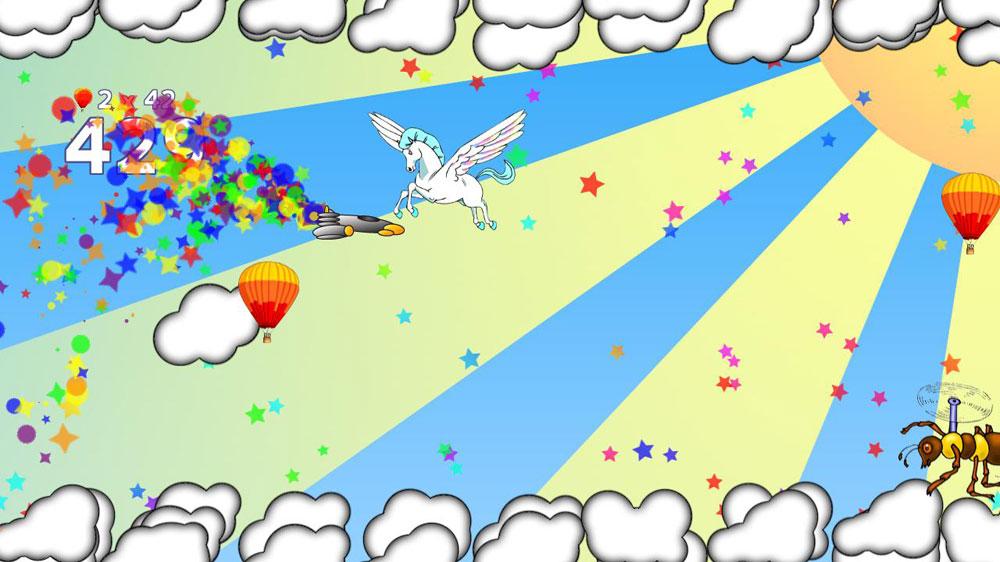 Asteroids Do Concern Me isn’t a space shooter, but that’s only because there isn’t any shooting. It’s actually just a space floater. You hold A to float, and you hold not-A to not-float. The world passes you by as you do this, both figuratively in the game, and literally, in real life, as you think about all the things you’d rather be doing than pressing not-A to not-float. Nothing interesting ever happens in Asteroids Do Concern Me until you hit something, at which point you explode, and you’re rewarded by not having to play this game anymore. It’s kind of addicting, but so is plastic surgery, and just like plastic surgery, if you play this game too much, your face will cave in. PUDDING.

OK. So. Remember a few games ago? Those were the Good Times, back when I thought THE UPRISING had a point. Now, I’m just kinda wondering how these games are supposed to make me want to play more. What the hell is going on? Shouldn’t somebody have vetted these? These are the kinds of games I don’t even bother demoing, because nothing about them sounds at all interesting. How are they supposed to draw in new players, when they can’t draw in current players?

If the next game isn’t any good, I quit. Videogames. Forever. 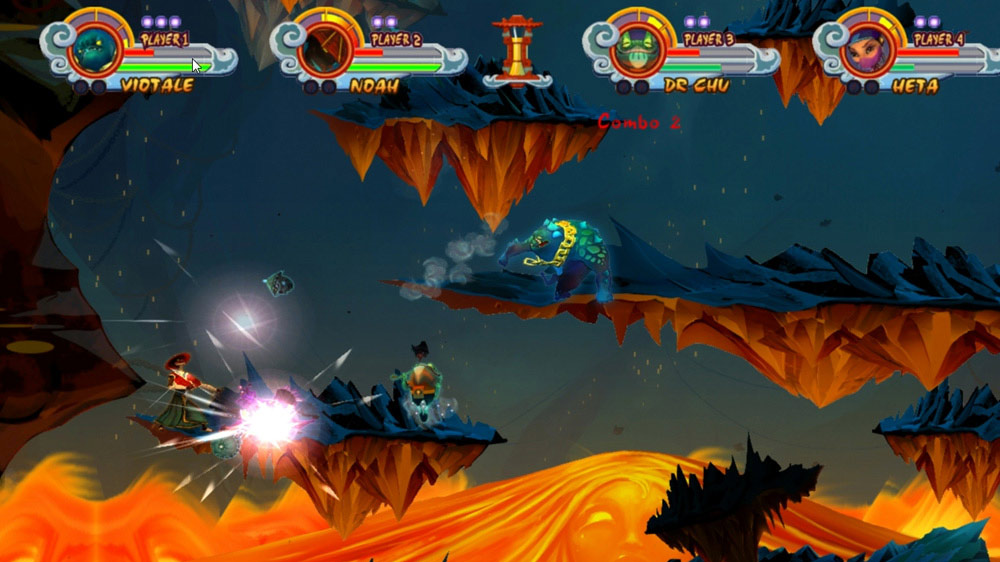 Ugh. It’s just Smash Bros., with characters no one’s ever heard of. PUDDING PUDDING PUDDING. If you have a Wii, GameCube, or Nintendo 64, there’s no point to this game.

Wow, that’s enough of that. I have too much respect for my happiness to finish playing the rest of these games.

In conclusion, THE UPRISING was just about the worst thing ever. It had such promise, too—I’m all in favor of finding ways to promote games like this instead of games like this. (Idea #1: Write a monthly column for the greatest website on the entire Internet all about XBLI games.) But if the way you’re promoting the good games is by releasing even more bad games, you’re doing it wrong.

My apologies to all the devs whose work I’ve insulted, but maybe, next time, try releasing a game with a better hook than “It’s like Space Invaders, only…no, wait; it’s actually just Space Invaders. Where’s my dollar?”

No, I'm not talking about your cousin who sucks at videogames. I'm talking about the movie Gamer. As you may have guessed, the movie is about games, but instead of being a movie about a specific video