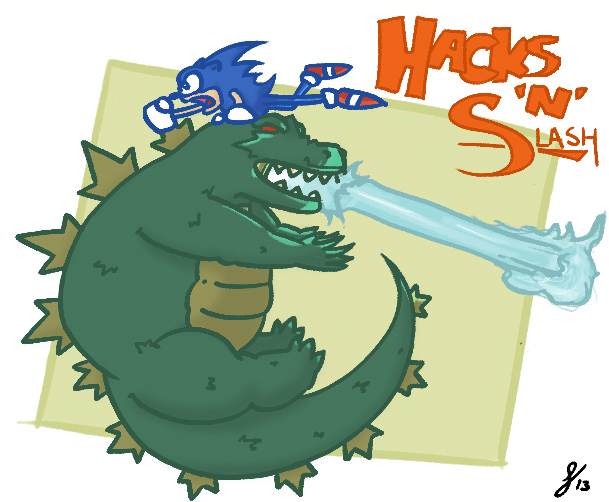 Sonic returns in another adventureous series. But Eggman returns as well! Eggman captures Tails,Amy,and the others! Can Sonic save them? Of course he can!

The GameCola Players return with the newly dubbed “Hacks’n’Slash” podcast (formerly known as “Read it and Weep,” which is a title apparently already owned by some other high-quality podcast). In this episode, we have: Sonic the Hedgehog fanfiction.

Performing in this episode are yours truly, Alex Jedraszczak, Diana Gray, Christian Porter, Joseph Martin, Matt Jonas, Anna Bryniarski, and Michael Gray. Join us!, as we try to figure out who’s an OC and who’s actually from the game—a task easier said than done—in the land of cyborg armies, sand-castle defenses, SpongeBob rip-offs and stress-sweeping. You can follow along in your book if you’d like! (In fact, you probably should, because the audio quality’s a bit spotty at times; we’re still working on that.)

If you have any awkward videogame fanfics you’d like us to read in an upcoming episode of “Hacks’n’Slash,” post about it in the comments. Until next time…listen and weep! (They can’t take that away from us, can they?)

Featured quote: “Yes, it’s this Microchip (shows Tails the Microchip) that Microchip was under one of Amy’s Boots & the microchip made Amy Run out of control, we need to find out who’s Microchip belongs to, do you know who made that microchip?”

This game is not just for wannabe farmers, and it's a good break from the traditional monster-destroying RPGs.