I was hoping to try to finish the game before I started my review on it. I was also hoping to send this review off by early February. Romancing SaGa for the Super Famicom destroyed both of these expectations and many more—as I can no longer tell if I’m 75% of the way through the game, halfway through, or if I fucked things up entirely. I bet if I looked in my Bible, which features one of the newer translations, I would find this game listed as one of the things Paul warns about in his epistles to Ro…

HOLY SHIT THERE IT IS!

18 The wrath of God is being revealed from heaven against all the godlessness and wickedness of those produced Romancing SaGa, 19 since what may be known about this game is alien to even God, because God has made it so that men should aspire to amusement that can be easily seen and understood. 20 For since the creation of the world God’s invisible qualities—his eternal power and divine nature—have been clearly seen, yet entirely ignored by the directors, programmers and artists of Squaresoft who wrought this wicked electronic cacophony into the world, soaked with the blood of the innocent, and sold by jackals in the temples to line their pockets with gold, understanding what has been made, so these people are without excuse. (Romans 1: 18-20)

And ye, the Lord will have mercy on your soul who shall ever play this game, for unless his eyes and tongue speak the language of the East, thou shalt not have A SINGLE PRAYER in conquering thy game! 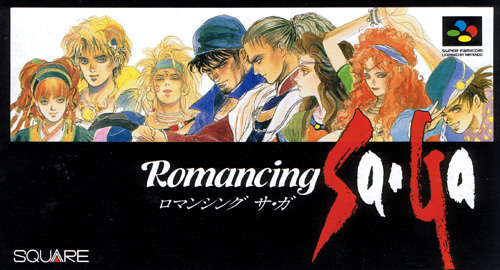 Umm…the main logo for the game!

What sucks the most is I thought I knew what I was getting into. I’m already familiar with the insanity of the SaGa games (and for those of you who aren’t, SaGa is the complete inverse of Final Fantasy. Whereas Square’s flagship series focuses on structure, plot, and, well, focus, SaGa is the other way around, having little if any interest in those things in exchange for an open world with a near random set of rules governing everything), and I wanted to order a game from Amazon.com with a gift card I had received. Nothing looked especially interesting, so I picked this by default. I can’t read Japanese and I knew to expect a very slippery kind of game, but seven weeks and 40 hours later, I’m still pretty overwhelmed.

You see, in this SaGa, which came out in 1991-1992, I believe in between Final Fantasy IV and V, the entire game is sidequests. You pick one of eight starting characters, go through a short personalized introduction scenario, and without much warning, you’re starting the game for real in the same open system you’d get with any other. You (sort of) progress the game by starting quests granted to you by random townspeople, monarchs, town fliers, monsters, etc., building up good or bad karma depending on how you approach each quest, which ultimately determines which ending you get. So far, I don’t have a clue what kind of ending is in store for me, if I ever even make it that far.

Gameplay is more or less the wild mixbag I was expecting. There is no overworld; there are just maps with locations that open up on them as you talk to people and gain new quests. As you start in one of eight different scenarios, the town system is set up so that, basically, the towns just seem to offer random assortments of things (although not random every time you go in). It’s not unusual for the second town you visit to have the best and most expensive armor in the game, which everyone and their dog can equip. You can sleep at any Inn for free, which is nice, you can save anywhere, and you can use a shit-ton of chartered ships to get around. There is pretty much no puzzle action to speak of; all conflict is basically fighting action. You get new characters either by finding them under the right circumstances or picking them up in the taverns. Some are important, and others are just random people fighting for you. 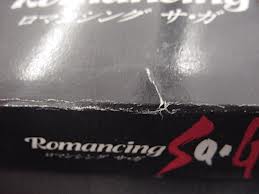 …and the side of the box! As owned by someone who probably
scuffed it up a bit after it fell from the high ledge of a closet!

The dungeons, like most things in the SaGa games, are ahead of their times in certain ways and still behind the curve in others. You get to see your enemies on the field, but they home toward you and, holy shit, a single floor of a dungeon may have upwards of THIRTY enemies—and they don’t stay gone once you leave the floor. If you clear 30 enemies out, go downstairs and come back up, guess what: All your work was for nothing. Some dungeons have more than six levels in them, meaning you could be fighting more than 200 BATTLES just to get to the boss—and there might not be an easy way to get back out!

Battle itself can also be insane. There’s a three-column system to battle for both the enemies and the players: the front, the back and the mid. You have attacks that can range from one or two spaces to anywhere on the battlefield. As people die, they get thrown to the back and fighters or enemies advance forward to take out the rest. This game uses a weirdly modified system based on Final Fantasy II and Final Fantasy Legend—you gain strength based on what you use, and you gain stats from them randomly in battle. If you use an axe, your strength and axe skills level up. If you use a bow, your agility and bow skills level up. After a level, the damage you do with the weapon increases, and after a few levels, you gain some pretty useful tricks you can do with it. Anyone can use anything, and the only thing that really separates out your characters is what they’re skilled with when you meet them. You gain no experience, just money (oh, and BTW, you can only hold a maximum of 9,999GP…until you sell something, then your gold gets converted into a jewel valued at 10,000GP before you can collect more money again. WTF?)

And the worst part? Without any warning whatsoever, the enemies LEVEL UP WITH YOU. So don’t bother trying to grind or get stronger; it just makes them mad. This, however, does not apply to bosses.

So my whole gaming experience with Romancing SaGa so far has been to wander around, talk to everyone, maybe get involved with a quest or something, and fight through thousands of encounters of enemies, who are tougher than the bosses, where attack means everything and defense means nothing. Basically everyone can dish it out, but no one can take it. Every single character and enemy in this game is a glass cannon.

And this wouldn’t be so bad except, to my horror, I could find NO USEFUL GUIDE on the Internet! At all! There isn’t even a fully translated ROM of this game available. No YouTube playthroughs, just a handful of incomplete guides on GameFAQs that list the quests, but don’t tell you what happens if, like me, you accidentally complete a quest before you even start it, or stumble halfway through it, complete part of it in reverse and then the other part conventionally, possibly messing it up permanently.

You can’t help but notice the hot, plump breasts of the young, curvaceous college graduate
who is new in town, doesn’t know who to trust, and longs to find a body to share a bed with.
Her slender waist betrays the round, triangular hips that swivel with each
passing step and then hover anxiously over you as she prepares to saddle her steed.
She moistens at the touch of your hand, her skin silkens with each bead of ecstasy rolling down
her statuesque body, and her ears long to hear you moan the pleasures she is giving you.
She cannot be satisfied and never knows when to stop, and just when you think it’s over, she wants more.
She’ll climb the tower as many times as it takes to get to heaven, bouncing every step of the way.
Seriously, I couldn’t even find decent SCREENSHOTS of the game to accompany this review.

Yet, for all this, I’m still giving the game a 6 out of 10. Somehow, SOMEHOW, it’s still kinda fun. I actually enjoyed grinding for hours on end until I realized enemies get stronger alongside you; it’s very rewarding to have characters gain four levels in various stats after nearly every battle. The soundtrack easily rivals Uematsu’s work (Kenji Ito has always been sort of a simplified version of Uematsu, and it shows here), and even though everything is completely out of wack, it still feels pretty refreshing to see some of these ideas existing as early as FFIV-era. I don’t know how, but I still managed to have enough fun to give this game a 6 out of 10.

If God is merciful, a real translation for this game will come out so others can experience with better clarity a game that pieces together JRPG and WRPG conventions like a transexual Dr. Frankenstein trying to create the perfect lovemate from the pieces he discarded in a cocaine-fueled confusion of self-gender identification. If not, it was never meant to be, under penalty of limbo. This game sure feels like I’m just wandering around a quasi-existence for eternity, but I suppose it could be worse.

When I first heard about School 26: Summer of Secrets, I instantly wanted to give it a try. It's aimed at teenage girls, and since I've been 16 years old for the past fifteen years, I thought it'd be