From Maine to Oregon Via Japan

In entertainment, works are considered to take place in their own separate universes which other, unrelated, works are generally not a part of. Sometimes it can be revealed that two works exist in the same universe, like Spider-Man and X-men in comics, Commander Keen and Wolfenstein in games, or Machete and Spy Kids in films. For this reason, it wouldn’t seem out of the ordinary if Spider-Man found himself tied up at the mercy of Venom only to be saved at the last minute by Kitty Pryde. It would, however, be a bit surprising if he suddenly ended up being rescued by Archie Bunker from All In The Family.

What if all these years Silent Hill wasn’t set in its own universe, but actually existed in another universe that came before it? What if the city of Silent Hill, Maine, was actually a bit closer in resemblance to Astoria, Oregon? Well, its elementary school, anyway.

Believe it or not, popular internet theory is that Silent Hill is part of the Kindergarten Cop-iverse. Now, yes, I’ll grant you that other popular internet theories include such mind-numbing insanity as “NASA faked the moon landing”, “Reptilian Illuminati shapeshifters rule world governments”, and “My Little Pony: Friendship Is Magic is watchable”, but there’s actually some good points for this one.

Many settings and set pieces between the two are strikingly similar. Let’s take a look:

This is definitely a similar archway design, the same two wooden doors, short staircase with middle railing, similar style sign above the doors, and even the same mounted torches. Though, still, it’s a reasonably standard elementary school design.

That is clearly the exact same anti-drinking poster in the two frames. Though these were pretty common—in fact, I think they had the same poster in my elementary school.

Now, this one is a bit more compelling. The poster seems a bit more non-standard. Still possibly a stock classroom poster, but not incredibly common.

A red-background, happy bulldog poster with a white blocky-text phrase above him? This could be another stock classroom poster, but it seems a stretch that the game has two obscure classroom posters that were both found in the movie.

It may just be a school bus but, believe it or not, I find this image to be the most compelling. The Silent Hill bus may be missing a detail or two like no side mirrors, no air horn, but really that can be written off as limitations to the PS1’s graphics processing capabilities. They have two significant things in common:

First, there are many types of school bus chassis but these two are both Ford chassis. Specifically, they are both based on the Ford B-Series line of buses. To put an even finer point on it, different model years for the Ford B-Series had slight aesthetic differences. For example, some models had a separated grill with the Ford logo in the middle, like the buses shown above, but many models didn’t.

Secondly, they are suspiciously both bus #7. How significant is this? How high do those numbers get? Well, in elementary school I took bus 56. In high school I took bus 93 and if you take the Ford B-Series bus below, you could have taken bus #9611. 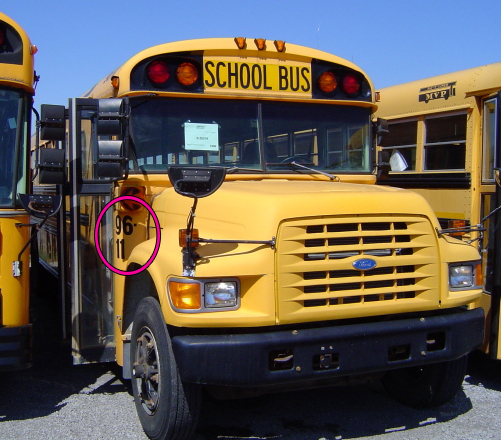 So, for both Silent Hill AND Kindergarten Cop to have all of this in common by chance seems very unlikely.

Ok, those are interesting pictures, but lets face it—the intention of these design choices was not to insert Silent Hill into the Kindergarten Cop universe. I’m not even saying that because I don’t think they’re crazy enough to do that—I DO believe they’re crazy enough. Hell, this would probably only tie the craziest thing in the Silent Hill games. Now, just because I don’t think they share the same universe (and let’s be honest—almost nobody really thought that) doesn’t mean I don’t think this stuff was actually taken from Kindergarten Cop. In fact, I absolutely DO think that. Really there’s just too many similarities for that not to be the case.

Let’s pretend you’re making a game that takes place in a Japanese high school. Presumably it will probably look at least a little different than a western high school, so you need a model to go off of. You could drop a few grand, hop a flight to Osaka and snap some pictures, or you could look for pictures through other means. A film that takes place in one would be a great resource to you. You’d get the exterior, interior and some ideas for set dressing as well. 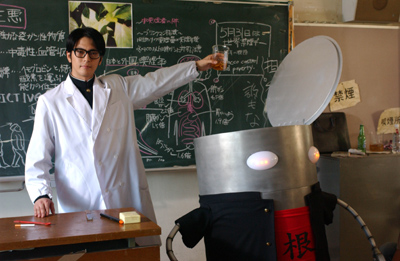 So, taking a high profile movie set in an American elementary school and using it as research for architecture, set dressing, and even local transportation seems like a pretty natural choice. Also, it’s understandable because Arnold is pretty popular in Japan, as you can see from this demonic fucking nightmare commercial.

One fan's very dark take on the Nintendo puffball.