Getting ahead in life is tough. That seems to be the moral of 7 Grand Steps: What Ancients Begat, which puts you in the shoes of an ancient city-dweller on the road to prosperity. But is it any fun? 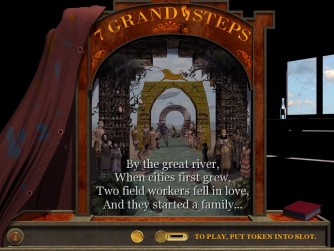 The first thing I noticed upon starting the game was the interface. 7 Grand Steps foregoes most of the traditional button-clicking in favor of dropping coins/tokens/things into slots, which give a satisfying ka-chunk sound when dropped. The interface is a novel idea, and for some reason it never gets old. Gameplay revolves (quite literally) around the player’s avatar, a random young city person looking to elevate their station in life. The way the player accomplishes this is by dropping tokens into that player’s slot to move the person around a large wheel. Tokens represent some form of production or skill, e.g. pottery, irrigation, sailing, papyrus, and so forth.

You start on the smallest inner circle of the wheel, moving along quickly and interacting with people along the way, with only basic tokens available to you. If you’re not completely ignoring the tutorial, you’ll eventually end up married. You then control two “pawns” to move around the board, one for each spouse. Your pawns can work together or separate from one another to cover more area. Along the way you pick up beads, which give Legend Points toward significant social advances. One of my pawns, for example, discovered the Arch this way. 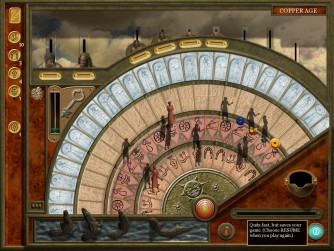 By “social advancement”, they mean “not eaten by crocodiles”.

Once you get to a certain point (a full revolution of the wheel) you end up growing old and dying. If you’ve been reproducing along the way, then one of your children can attempt a rite of passage and then becomes your new pawn, and the game starts over again. You progress in this way until you move up into a higher ring, representing a new social class (laborers become artisans/craftsmen, who become nobles, etc). To get more tokens, you drop a special “make tokens” token (called the Ingot) into either parent’s slot. They move backward along the board and “produce tokens” with whomever they come across first. I don’t know what that might represent in-game**, but I know that when your own married couple makes tokens, then you have a chance of producing an offspring.

As you go along, you find yourself either with too many tokens or too few, neither of which will get you anywhere. There’s a sense of competition with the other people on the board, as the AI pawns will move and create tokens and get beads along with you, and you’re all competing on the same track. I found that the only real way to get ahead was to do what any parent would do: focus all my attention on one promising kid and ignore all the others. Sure enough, starting the next generation with the favorite child allowed him to inherit important skills and tokens that would have otherwise taken lots of time to get. This way, you can use a parent’s skills and knowledge to dump tokens into training for one of your children, then that child trains his/her child, etc. This came back to bite me later when my poster child was unfairly fed to the crocs, and I had to continue the game with a child that was somewhat…less than perfect. 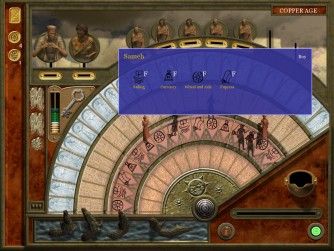 “Sameh! Get back under the porch before the neighbors see you!”

So…is it fun? The short answer is, “kind of.” It’s satisfying to see your children grow up and do well, then have children of their own and see them do well. The game is presented in an artistic way that creates a good atmosphere, and for a while you get absorbed into the stories and lore presented about your little couple and their kids. You’re creating stories, tales of ancient history portrayed from the little guy’s perspective. It’s a fairly deep strategy game, figuring out how to run the city-states and play the ruler’s role.

But that’s about all you’ll get. I put many hours of gameplay into 7 Grand Steps, and in all the time I played I didn’t see any fundamental change in the gameplay, excepting the very last ring. It was a minor change, however. The game was still about moving along the wheel, having kids, amassing wealth and passing it on to the next generation. You play your tokens, you move around the board, you do it again. That’s it. I found myself wanting some kind of objective in the game, something more sophisticated than just, “make it to the end.” Then again, maybe that’s just a metaphor for life, and the game is way more “meta” than I give it credit for.

Graphics: Excellent. Whatever else happens in the game, it’s presented in a consistent and appealing way. The art style is satisfying without being overly in-your-face about it.

Design: Not terrible. The game was inspired by The Sumerian Game, an emergent-narrative game from 1962. The stories you create are engaging for a time, but it gets old quickly.

Sound: An okay soundtrack, enough to ignore without having to TRY to ignore it. It’s bland, it’s functional, and it’s there. Kind of like the carpet colors in an office building. The only highlight is the satisfying coin sounds from the interface.

Fun Factor: Meh. This one was a miss for me, but not by much. The game is executed well, but the premise is slightly lacking.

Hey look, everyone, it's time for the monthly update of testgame! This month's article is short and sweet, but don't let that fool you. We've got a nice handful of new things to checkout in the gam