One of my first thoughts playing this game was “Whoa, is this the game EarthBound was making fun of?”

When I FINALLY got my hands on a copy, it was the culmination of an interesting journey in the context of a videogame collector. The first, and only time I saw it, was in 1995 or 1996 at a GAME HAVEN on Kingston Pike of Knoxville. When finally I took my wife out to see Knoxville, we were saddened to see the GAME HAVEN was no longer there (though I’d made many return visits between), but the forces that be decided on an alternate ending for me, and when we went to C&M Games at the West Towne Mall, I found a copy there for $24.99 and promptly scooped it up.

Who would’ve thought a 17-year journey would’ve been finished only across the street from where it began? 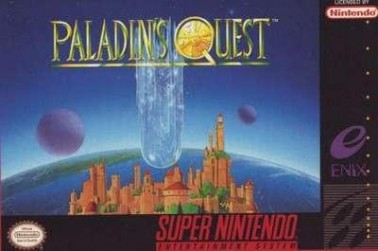 I don’t know why, but I REALLY like this box art. The impression I get looking at it is “this is everything I deeply desire about SNES RPG fantasy and obsession with collecting all summed up right here”. I understand that statement LESS than you do.

Additionally, that I find interesting anyway, this is perhaps the only SNES JRPG I went into knowing virtually nothing about it. I remembered it was a standard kinda RPG for the time, and that the gimmick to this game was magic did not use MP, but HP—but other than that I had no idea what this game was about. It’s kinda strange to think about, as long as I’ve crawled across the videogame interwebs, as much as I gorged on all the SNES JRPG fansites for a decade and a half, I didn’t hear anyone talk about Paladin’s Quest almost at all. While I haven’t beaten the game, I’ve put enough hours into it to give you an idea of why you should check it out.

First and foremost, this game is WEIRD. And if that’s not the reason people typically play this game and stay quiet, the almost unbelievably ugly graphics probably are. Honest to God, you can barely even tell where you’re going half the time. You don’t know what’s a barrier or a door or a staircase or what you can get through. I want to make a joke wondering who the hell cleared these sprites and colors to be used, but what I have to say on it would be an insult, purely unacceptable to the visually challenged everywhere. Let’s just say it looks almost like EarthBound, except it’s totally serious…

Second, this game is WEIRD. And the pacing of it and the world it takes place in gives you little idea as to what’s going on. It vaguely resides in some weird fantasy tech world where people live in eggs and on kites and shit, and there’s a million different races. You unleash a giant and then you go town to town to look for this lady who can help, and then you need to find the holy items, and then you get caught up in the resistance, and fuck it, I can’t keep all this shit straight. Just move on from one point to another and don’t worry about the bigger details. I still don’t really know what this game’s about, and I might not by the time it’s done.

Third, this game is WEIRD. The battle system seems traditional; Dragon Quest-style fighting with the unseen characters swatting flickering images for numeric damage, but you don’t control it with typical “push A to execute command”, it gives you an…orbital? series of commands that you navigate and execute with the D-pad. It’s a lot more efficient than it sounds, but those of you who like to use emulators and speed it up to get through battles quicker are at a loss here. 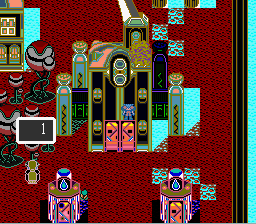 True or False: this image is glitched.
…it’s true, this ISN’T actually as bad as the game looks, but when I went to go look for pictures on it to put here, I had my doubts for a moment.

Also, for some reason, and pretty much unlike any RPG I’ve ever played, this game actually allows you a near full range of bodily actions to hit your enemies with in the game. Once you select Attack, for example, you get the option of using your Right Hand (which likely has the weapon), your Left Hand (which likely has a shield, which might execute a special power, or just allow you to slam the enemy with it), your Head (if your helmet has a special power in it, or let you headbutt the enemy), your Feet (usually a boot to the face), the item on your Belt, or your Armor. The real attraction here is the occasional special powers that come on it.

Fourth, the way characters come in and become useful in this game is WEIRD. You only get two permanent characters, boy and girl, and everyone else who comes in is basically just a silent partner. In the early part of the game, it’s mostly story-related characters who join you for missions, but after a while, this mechanic is oddly almost totally abandoned for a “mercenary” system in which you pick up dozens of potential fighters from bars or in random spots. It feels like an odd cross between Final Fantasy IV and 7th Saga.

Speaking of 7th Saga, the rest of what I have to say about this game is WEIRD, as this game feels like it has a, well, weird kinship with that game. Totally different look and mechanics to it, but still feels like 7th Saga at times all the same. Like distant cousins who act similar to each other without knowing it. It has a surprisingly high difficulty with random encounters that can easily wipe out a fully healed party like it was nothing, and there are a lot of times where you are thrust into a brand new area with no way to get back to the town you were saving up to buy equipment from. Grinding in this game is required, so take it off your “to play” list if you hate grinding. Healing HP spells are very hard to come by (I’m in the mid-50s of levels and haven’t come across one yet), and there are very few items to actually buy in the store. Instead of buying healing potions, you acquire “bottles” that you can clip onto a belt or keep in your bag, and you go to an item store to refill them with apparently the same generic medicine that somehow does better and better depending on the bottle you put them in…? I don’t know.

And yet, for all the WEIRDness in this game, after a while—and a lot of grinding—it kinda starts clicking together. What feels like a generic, ugly Dragon Quest knockoff eventually starts getting more interesting as it plays along. The first quarter or third of the game plays it straight and lays down a foundation, but the rest of it slowly starts twerking with that foundation—and your expectations—giving plenty of room for enemies, scenarios, dungeons, and even mercenaries to get more and more interesting. I’ve said it before and I’ll say it again, the best games in the world are ones that lay down rules and foundations, and then start fucking with them and your expectations along with them. I have to say, this game does that beautifully. Totally flipped me on my head.

The magic system is also interesting in a good way. There are basically eight elements in the game, and slowly, by going to towns that make them available for purchase, you “gain access” to them. This means you imbue your spirit with them, and it allows you to build up an affinity for that element and combine those elements to make other spells. The spell-crossing is automatic, and to make it stronger, you have to keep using spells to kill enemies. It’s kinda like Secret of Mana‘s magic system except it builds up the strength of the spell and the strength of your defense to that element. 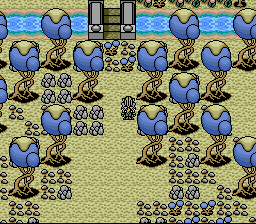 What the shit is going on with the forestry in this world? Are those planet-like globes impossibly supported by tiny little roots supposed to be trees or what?

As I said before, I’m in my mid-50s of levels on this game, but I have no idea how close to beating it I am. It’s a strange and oddly satisfying game, but like many of Enix’s RPGs, it could’ve used some smoothing over. This game ultimately feels like Enix was trying to do their own mockbuster version of Final Fantasy IV with elements of 7th Saga in it (with a developer coincidentally and hilariously called COPYA SYSTEMS. No, I didn’t make that up), and while I definitely see it turning off a lot of gamers to the point where they barely acknowledge it, I’ll raise my voice up to fill the void and give it a decent review.

The GameCola staff remembers how they all got themselves into this mess.