I imagine the story behind Pajama Sam’s Lost and Found looks something like this.

Dave: Hey, Bob, where’s that minigame I asked you to make for Pajama Sam 2?
Bob: I’ve got it right here on my computer. Check it out.
Dave: It’s a platforming challenge, huh? Neat.
Bob: Yeah, the goal of the minigame is to collect all the pieces.

(Dave plays the game for a minute.)

Dave: This game is kind of repetitive. Can you do anything besides jump?
Bob: No. I didn’t want to make it too difficult for little kids.
Dave: I’m noticing that the controls are kind of jerky.
Bob: Well, it’s just a demo.
Dave: Yeah…I’m sorry, Bob. I don’t think this is good enough to go in the game.
Bob: Really? But I spent a whole week programming this!
Dave: It doesn’t play very well. Maybe if you clean it up a bit, we can include it in the next game.
Bob: Nah, that’s okay. It was kind of a dumb minigame, anyway.

Dave: AUGH! AUGH!!
Bob: Dave, what’s wrong?
Dave: It’s the company that bought us out! They want a new Pajama Sam game by the end of the month!
Bob: What? We have to make a game in less than a month?
Dave: I know! That’s impossible!
Bob: Wait, I’ve got it! Remember the minigame I made for Pajama Sam 2?
Dave: You mean the crappy platformer that wasn’t good enough to make it into the actual game?
Bob: Yeah, that one! Let’s make a game out of that!
Dave: We don’t have time to do anything else! Let’s do it! 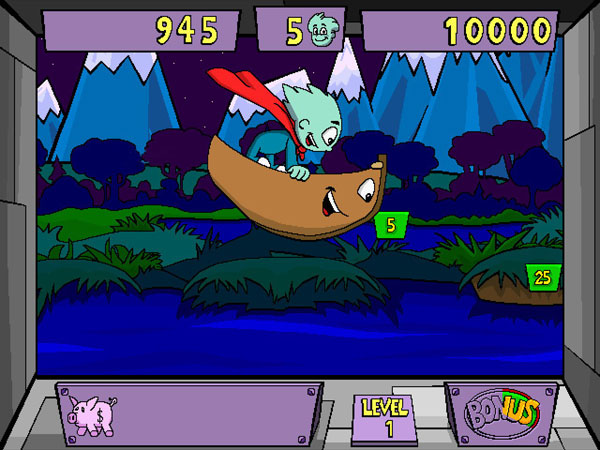 If you’re too lazy to read the above scenario, let me summarize. Pajama Sam’s Lost and Found feels like a minigame that was cut out of Pajama Sam 2, which was later expanded into its own game. It’s a fairly simple auto-scrolling platformer, in which you jump to avoid obstacles and collect puzzle pieces.

If the controls were tightened up a bit, it would be a perfectly adequate three-level minigame. The problem is that it’s a hundred-level game. No matter which way you slice it, the game is just not good enough to be stretched into a hundred levels. Just like Bugs Bunny’s Crazy Castle, the levels start to blur together after five minutes, and it becomes insanely boring to do the same thing over and over again.

The way to avoid tedium in a game like this is to have some variety. Introduce new enemies or new abilities every few levels. Change the level designs, so that the players can instantly tell they’re in a different location. Don’t just copy/paste the previous level and put the enemies in a slightly different place; that’s not the same as making a new level.

Sadly, all the levels in this game are pretty much identical. In fact, I suspect that half of the levels of the game are duplicates or near-duplicates of the other half. I certainly couldn’t tell the difference if that was the case, so it’s a pretty safe bet that the game’s target audience (six- to eight-year-olds) probably couldn’t, either. 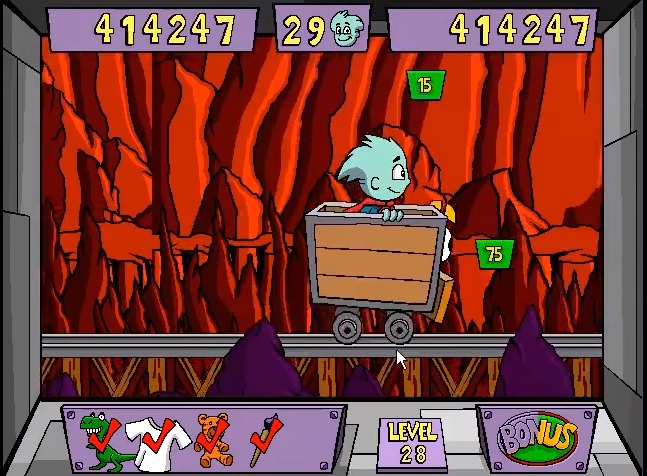 To the game’s credit, they do change the background art and enemy characters every twenty levels, but it’s just a cosmetic change, as the gameplay remains identical in each world. Now, if the game switched locations every 5 to 10 minutes, that could work rather well in making things feel expansive and varied. But since the locations only switch every 30+ minutes, all that does is make each world feel like it goes on way too long.

Also to the game’s credit, it has some nice touches that easily could have been left out. For example, you can get a minigame if you collect all six bonus puzzle pieces. There are three minigames in total, and you can have fun unlocking, then playing them.

Yes, there are minigames in this 100-level minigame. It’s meta.

The voice clips in this game are okay, considering the fact that no character has more than three lines total. Since half of the characters aren’t from the Pajama Sam series, I don’t know if this is good or bad. The voice clip that everyone hates is Sam’s line “I picked up a bonus puzzle piece”. There are 600 of those pieces in this game, and he says that line every time you get one. It quickly becomes annoying.

To conclude, Pajama Sam’s Lost and Found would be better off lost.

Greetings, GameCola fans! For those of you afraid that GameCola was truly dead, fear not! We are only in a hibernative state while the new site comes online. Think of it as a coccoon, except instead o