Little Nemo had just fallen asleep when Capcom appeared and said, “You are requested to appear in a videogame based on an animated film based on an 80-year-old comic strip by Winsor McCay.” Nemo was surprised as well as delighted to receive Capcom’s invitation, so he promptly fell back asleep, mounting a rescue attempt in his dreams to save King Morpheus, regent of Slumberland, from the villainous Nightmare King. 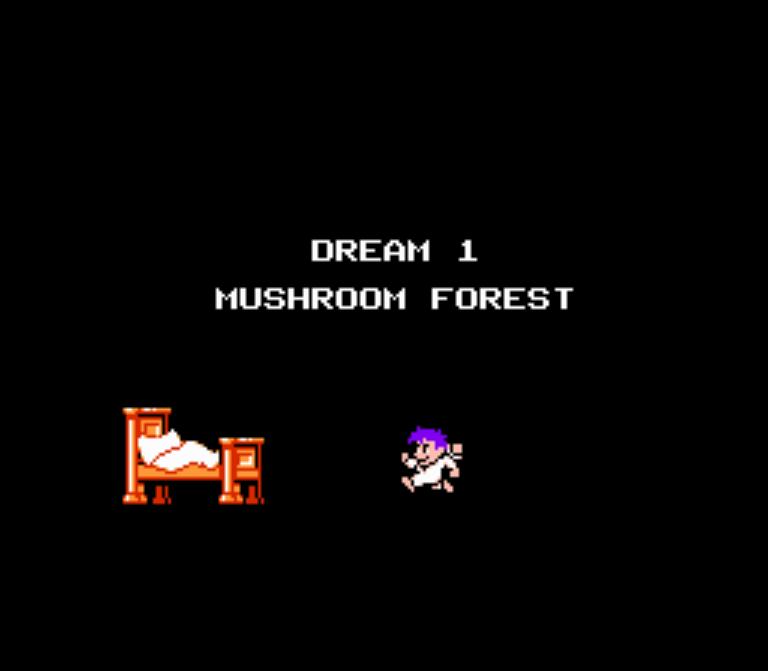 It’s a good thing my dreams don’t get announced in big text above my bed.
“DREAM 2782: THAT ONE WITH THE MUSTARD, AGAIN”

Little Nemo is a platformer. Run and jump, watch your health bar, toss copious amounts of candy at wild animals. The usual. Unfriendly animals are momentarily stunned by candy; friendly animals gobble it up and quickly doze off, allowing you to take advantage of them in their sugar-induced naptime. And by that I mean you can ride them or transform into them, using their abilities to climb up walls, burrow through dirt, thwack turtles on the head with a mallet, and so on. Each animal controls differently, and while you’ll need to master them all to make it through the game, most of the time you have the freedom to roam around in any of the forms available to you. Toward the end of the game you’ll also be able to swap out candy for a powerful magic wand, which does considerably more damage to one’s teeth. 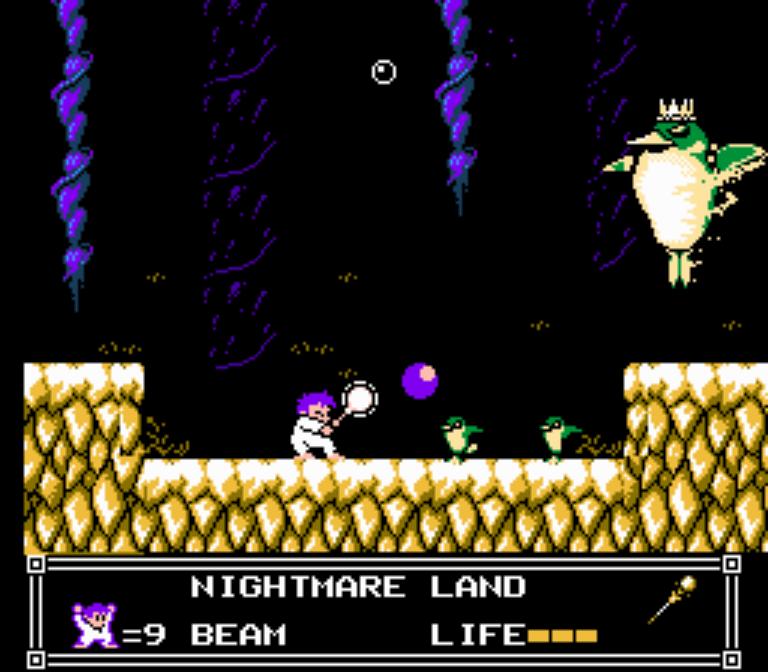 Due to the rich history (the comic ran for over a decade!) and complex storyline preceding the game, I highly recommend you read the entire run of the comic strip and watch the whole movie before plunging yourself into the first 15 minutes of Little Nemo: The Dream Master, after which point you will give up because it’s too hard. I’m only kidding, of course; you can probably skip the movie.

The game kicks off with a nicely drawn cutscene introducing the player to little boy Nemo, Slumberland, and the yucky princess who will probably try to kiss him if he rescues the king. Not that there’s any danger of that happening—despite all the extra lives and health recovery items scattered across the stages, Little Nemo‘s learning “curve” is a steep cliff with buttered barbed wire for handholds. This becomes apparent within the first 30 seconds of gameplay. 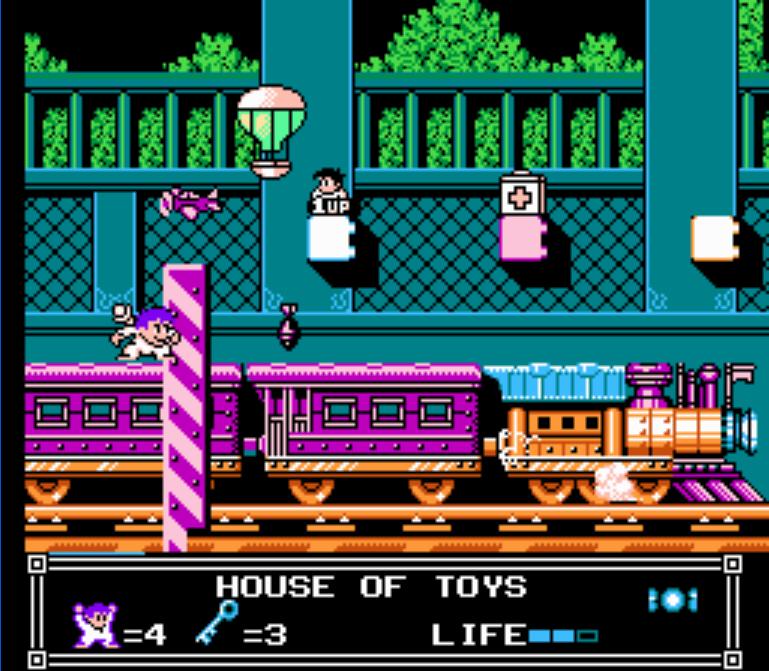 Randomly placed freebies do not excuse the difficulty of this level.

The very first moments of gameplay have you running up and down steep, oversized mushrooms while dodging enemies you can’t actually kill just yet. It isn’t long before you encounter a friendly frog, whose high jump and big belly will let you flatten your foes…but he’s perched on a small mushroom that’s just high enough for you to have to jump and throw candy, all the while dodging at least one more enemy. This is not appropriate for an entry-level challenge; at this point you’ve had less than a minute to figure out the game physics, on bizarre terrain, no less. It should come as no surprise, then, that I was once killed by my ally when the supposedly friendly frog turned around suddenly and body-checked me off the map. 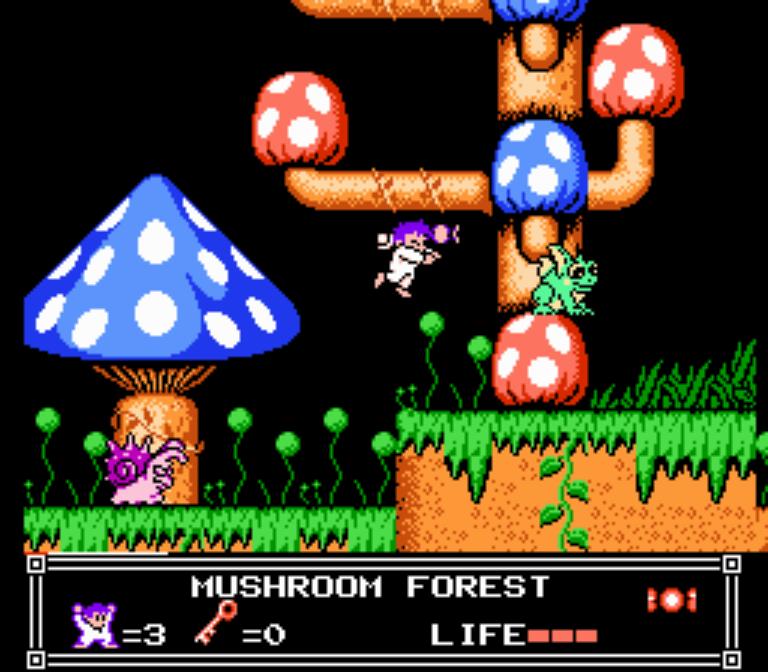 That is a frog, right? Kinda looks like a sharkman now that I’m looking at it…

This was not an isolated incident—in the next stage, I donned a bee costume to fly across a bottomless pit (me in the videogame, not me in real life, though there’s a fun mental picture for you), and found myself helplessly falling into the pit a few seconds later when the bee inexplicably ran out of bee gas, or whatever it is that powers bees these days. Little Nemo gives you little or no opportunity to test out your new abilities in safety, and throws advanced challenges at you before offering any of the basics; it’s like starting Super Mario Bros. on World 4, or learning to fly wearing a bee costume over a bottomless pit. 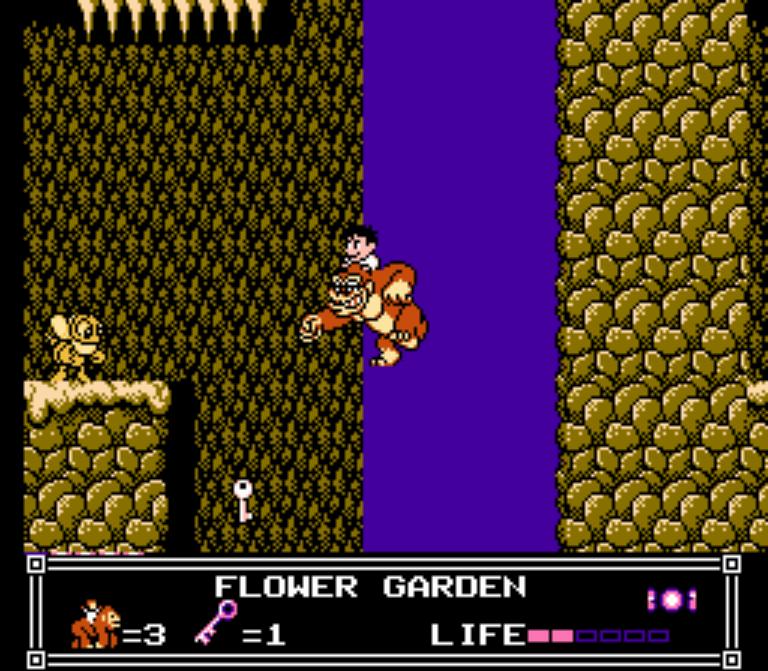 Of course, you can also fall down the hole while riding an ape. The pit’s not picky.

This might not be so bad if the game were totally linear, and you only had to clear the challenges once or twice before reaching a checkpoint, but you also need to collect a certain number of keys to unlock the exit to each stage—miss one, and suddenly you’re backtracking through mazes and multi-screen rooms you could barely navigate on the way in, let alone in reverse. And you’ll get no help from the colorful characters who greet you at the beginning of each stage; instead of telling you about the underwater labyrinth and the obvious dead-end with an invisible teleporter no one will ever find, half the people you meet will walk away from the conversation and take a few points from your IQ with them. 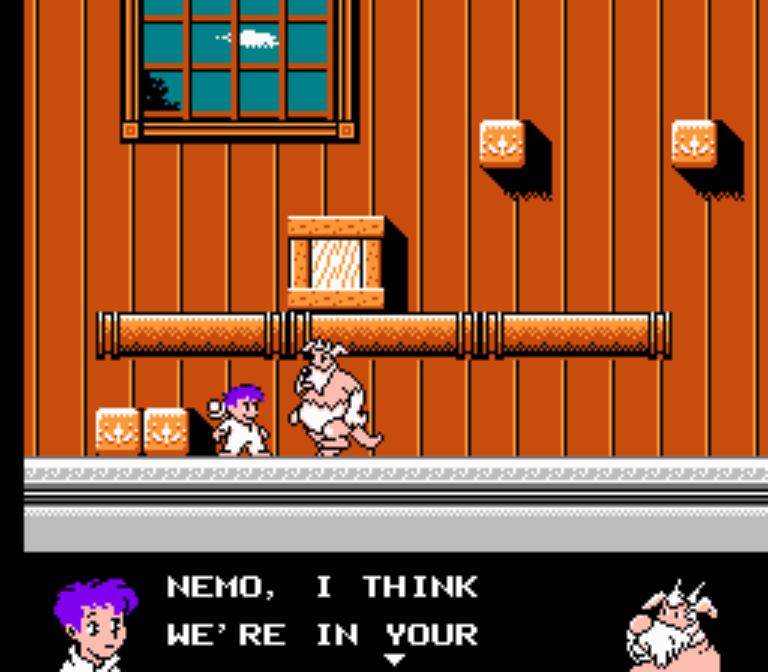 If you are already an experienced platform gamer, don’t mind an ongoing scavenger hunt for keys, and can put up with two or three adventure-game-worthy headaches about how to proceed, then you might begin to eke some enjoyment out of Little Nemo. The animal transformations add a slight puzzle element and keep the gameplay fresh with their different abilities (and different size health bars, too). There’s a good balance of exploration, confronting enemies (creepy trees, punk snails, renegade tadpoles, rocket squid, etc.), and tackling platforming challenges (such as avoiding falling spiked ceilings, dodging fire jets erupting from the ground, and cloud-hopping as the screen is scrolling). Stepping away from the gameplay, the game’s got colorful and detailed graphics, varied locations, interesting character designs, a complete storyline (something of a rarity for many NES games), fun sound effects, and an excellent soundtrack that’s eminently hummable and fits each situation perfectly.

Still, it requires some dedication (and, most likely, some cheating) to see this one through to the end. Nemo and his hermit crab getting hit. Personal injury never looked so cute.

The last section of the game, Nightmare Land, is broken into three stages, each with a boss at the end instead of a locked door. I take back what I said about the game possibly being better if it were more linear—the final stages offer so little room for error that there’s really only one, maybe two ways to clear each challenge, and even then there’s a ludicrous amount of precision and repetition required from our pajama-clad hero. Whether it’s the excessively tall room where every slightly miscalculated jump will land you back at the bottom (and did I mention the endlessly respawning falling enemies?), or the drawn-out boss battles where fatigue is more likely to kill you than a tough attack pattern, something will turn the game into a slog for anyone but the most practiced and patient gamers. 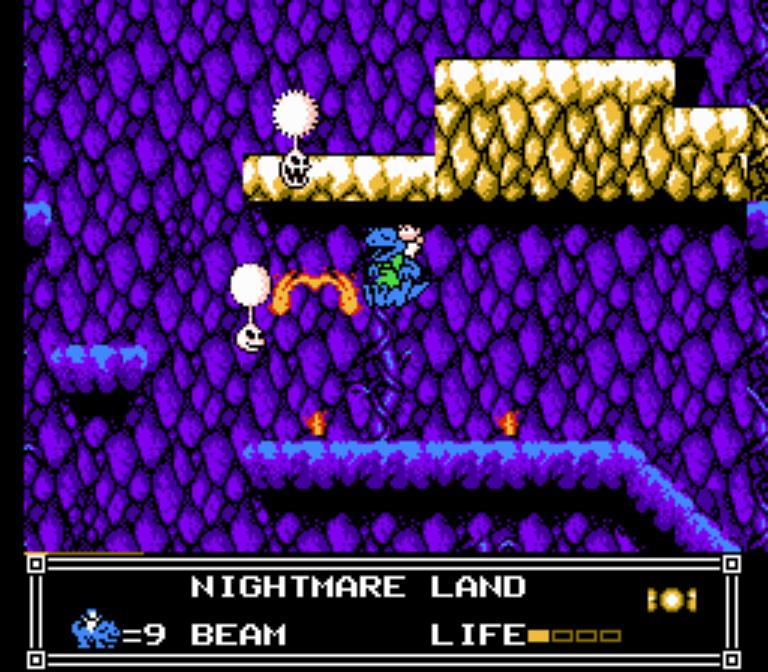 This is what fun looks like. If you’ve never seen fun before.

Especially if you’re playing on an emulator, or with a walkthrough, or are a skilled and patient platform gamer, or don’t own any other games, Little Nemo: The Dream Master is worth a look. It’s got all the right ingredients to be an outstanding platformer, from the game mechanics to the assets to the overall polish; it’s the structure of the challenges that sometimes makes this would-be treat a bit too sour, bitter, or otherwise hard to swallow. But hey, you get to throw candy at dish-tossing monkeys, so there’s that. 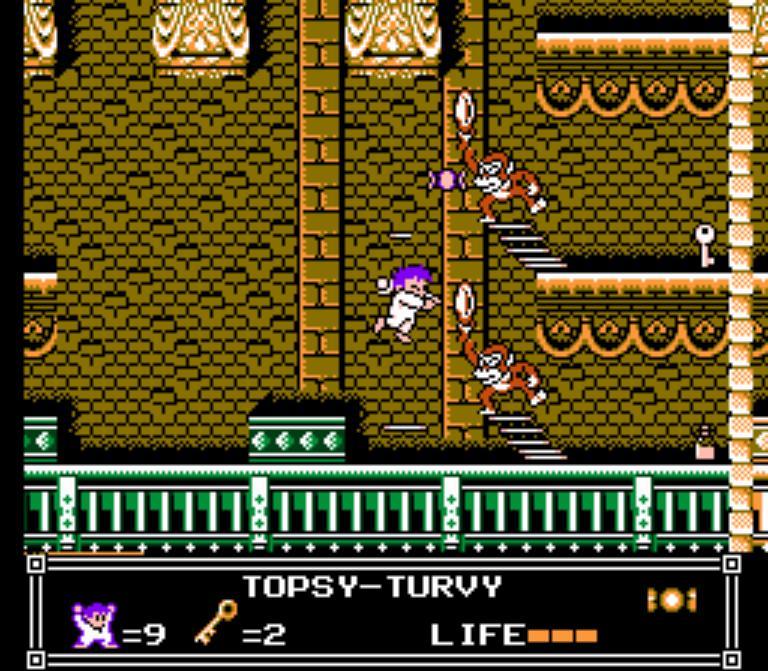 I forgot. I hate these monkeys.