Disney shut down all of their videogame studios except one this year, pinning their final hope for videogame success on Disney Infinity: Expensive Edition. The game costs $75, and it comes with three figurines. Additional figurines are sold at $30, except for “special” ones that are sold separately for $14, and of course you’ll want to buy all 21 of the $6 special effects discs.

So what are the special effects discs? They’re basically Game Genie codes. One gives you 20% more health, one gives you a new weapon, and most of them give you a theme based on a popular Disney movie, such as Alice in Wonderland, The Black Cauldron, and The Littlest Outlaw. It’s definitely worth paying $6 for cosmetic changes, right?

So here’s what got our attention at Fabricated News: one of the sets they’re planning on releasing is the “Girl Power Pack,” which includes Rapunzel, Vanellope von Schweetz, and Violet Incredible. We might question the assertion that “nothing says girl power like a woman with a frying pan, a small child, and a teenager who disappears whenever there’s trouble,” but we’re not questioning the screenshots. It looks like this set is a spiritual successor to the cancelled 1990’s Sega Genesis game, Disney Princess Battle! 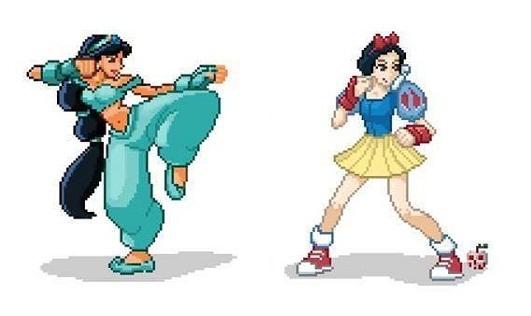 Disney Princess Battle was a 2D fighting game, which was highly praised by feminists for being bold enough to present the princesses in traditionally non-female roles. It was also praised by perverts who like seeing women in short skirts. Sadly, the game was cancelled about 80% of the way through development, because the producers thought it didn’t have enough 10-button combo moves.

Sadly, no one yet knows what will be on the Girl Power Pack, because it hasn’t been released yet, presumably because they need extra time to add as much “girl power” as possible. Look for this fun addition to Disney Costs Infinity Dollars when it is released in December! Also released at this time will be Anna Bryniarski from Frozen and Mickey Mouse from Fantasia, which is obviously a movie that modern kids watch all the time.

Something that I cut out of my article on the Game Developers Conference was the part of Mr. Iwata's speech where he promoted the latest Nintendo game called Rhythm and Beat or something like that.