Are you one of those people who likes RTS games? How about a fan of Age of Empires? Or maybe you’re also a mobile gamer? Combine all these together, and you got a nice telescope metaphor. Use this and look no farther than Clash of Clans, a mobile RTS game available on the Android App Market, as well as Apple App Store. 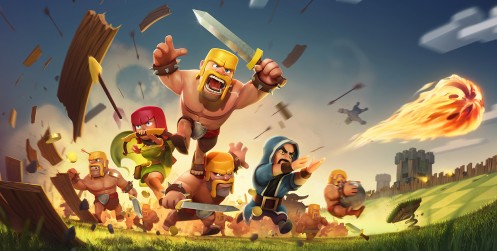 Clash of Clans is an RTS mobile game developed by Supercell. The game starts off giving you the task of defending a nearby village from a horde of invading goblins (how typical). With warriors and soldiers a click away, you have to fight off the invading goblins. Once you succeed, the game will drag you through the tutorial. For those of you familiar with Age of Empires, the game mechanics may seem very similar. By using Elixir and Gold, you can build new buildings and units, or even use them to improve buildings. After the tutorial is done, you will be prompted to name your village and the real fun begins.

Given the fact that it is a game, it’s only natural that there’s some sort of campaign, right? Luckily, for the sake of consistency, there is—but I’ll just go ahead and sum it up: Goblins; lots and lots of goblins. Oh, and they have cannons and other cool, dangerous stuff as you progress. Each stage in the campaign has an overall score rating of three stars. In order to obtain three stars, you must destroy all target buildings. You must at least get one star to proceed to the next mission, though. 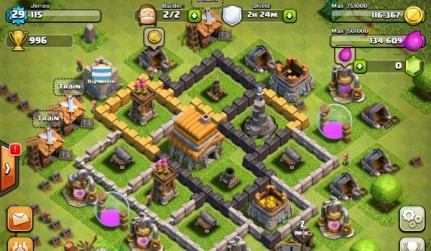 Now I’ll admit, the campaign is fun and all, but multiplayer is by far the best part of the game. By using a small portion of your gold, you can randomly be placed against another player. Your objective is similar to the campaign: Destroy their city! However, here’s the catch: Since it’s a player-owned village, they have access to the same upgrades that you have—some players may even have further-advanced defenses. Combine this with the vast, supercomputer-like mentality of the human brain, and you’ve got yourself quite the challenge. But, don’t be discouraged. You can always a join a clan in-game for free. While in a clan, you can send and receive units from clan members to help defend your village from enemy attacks.

All right, so after all that babbling, let’s get on to my opinion. Overall, I find the game to be very entertaining. Nothing is more pleasing than watching your enemy’s village crumble before the awesome might of 100 Level 3 Barbarians, right? Coupled with the fact that enemy attacks actually encourage players to think outside the box, this game can also be a good problem-solving trainer. The only downside I see is the one most common with all mobile games: wait times. For the sake of Ponyville, I can’t even begin to express my hate for the wait times on some upgrades. I could probably write a 250-page novel on my love for Vocaloids and still be waiting for my Town Hall to upgrade to Level 6.

It is duly noted, though, that this game does have a pretty solid basis. It’s also a rather popular game. Oh, and did I mention it’s free? If you’re looking for a good mobile game to waste countless hours on, look no farther than this game.

Marvel Super Heroes vs. Street Fighter, unfortunately, is one of the sub-par titles.