So, I’m gonna look at the words I used in my first article and define them, and some other terms that are important in transgender conversations.

Binary: When used as an adjective, adhering to the gender binary. See “Gender Binary” below. 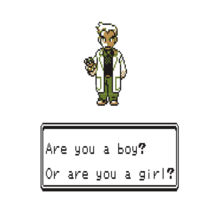 Cisgender: Identifying with the gender you were assigned at birth. Derived from the Latin prefix cis-, meaning “on this side of”. Most characters in videogames are cisgender.

Crossdressing: Wearing clothing that is generally associated with the opposite sex. Faris from Final Fantasy V crossdresses for much of her life in canon, but note that Faris only dresses as a man and does not personally identify as male. Naoto Shirogane from Persona 4 also crossdresses in canon, but I choose to see it differently—refer to them by neutral pronouns if you prefer the crossdressing interpretation while discussing them with me, please. 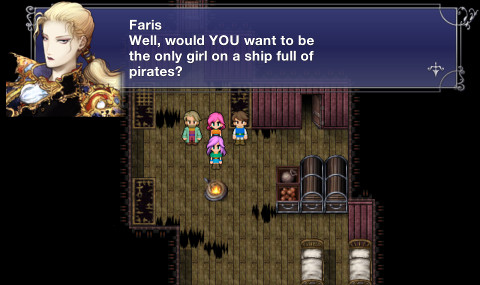 Faris has no time for sexist pirates.

Gender Binary: The idea that only two possible gender identities exist. Most videogames assume this.

Gender Dysphoria: Experiencing significant discontent with the gender you were assigned at birth.

Intersex: A variation in sex characteristics which do not allow an individual to be distinctly identified/assigned as male or female. In videogames, intersex characters or characters lacking gender are most often of alien species, supernatural beings, or otherwise not human. As we can assume that most people playing videogames are probably human, this is likely tiring for players who identify as intersex.

Quina Quen fits somewhere between the previous and following terms.

Nonbinary: Not fitting into the gender binary. GameCola’s very own Robyn Tyrfing does this! There’s a lot of nuance to this category, and different individuals may have differing reasons for using this term.

Transgender: Not identifying with the gender you were assigned at birth. Derived from the Latin prefix trans-, meaning “across from”. Does not get a lot of positive attention in videogames. Note that “transgender” is generally acceptable, while “transgendered” can be seen as a problematic term and should be avoided. Some agree, and some disagree, however I would err on caution and not use it.

Transition: Changing your gender presentation to accord with your internal sense of your gender. Dys4ia is a game about this.

Transman: An AFAB person transitioning to a male gender presentation. Naoto Shirogane of Persona 4 reads as a transman. 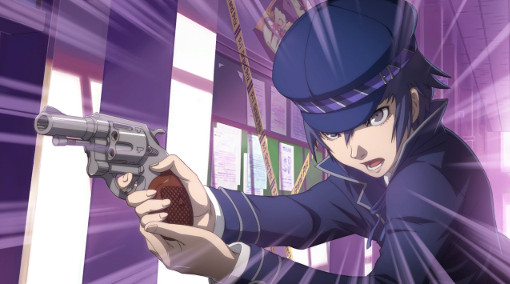 Naoto will shoot you if you don’t pay attention to preferred pronouns.

Transvestite: A person, usually cisgender and/or male, that derives sexual pleasure from dressing and presenting as the opposite gender.

Transwoman: An AMAB person transitioning to a female gender presentation. Birdo from the Super Mario franchise was originally designed as a transwoman, although these sentiments have largely been removed from American releases. 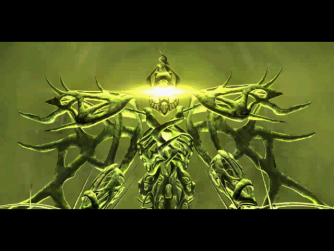 “I can forge planes with my gender, and I can unmake you!”

As a nonbinary/gender-neutral transgender person, I look at the “trans-” part as more “transcending” than “transitioning”. My identity allows me to explore expression and presentation however I like, with no need to fit an established social norm. After puberty, I had a desire to crossdress, but a transition wasn’t part of my identity at that point. I had no desire to take hormones, drastically alter my body, and run the possibility of health risks. But, after continuing dysphoria, a friend talked me into hormones because they’d help. Overall, I like myself a lot more now than before I started hormones.

You can see there aren’t people like me or with narratives even close to mine in videogames, and that makes the videogame industry feel hostile to me at times. Like I said in my first article, there are not a lot of positive binary transgender representation in videogames, and of course the more obscure presentations are even more misrepresented.

At the least, I hope this cleared up some confusion about the terms I used and my own personal identity. Wikipedia is a great source for further information, and so are many other websites, but reading on this subject is not for the faint of heart or for those who don’t have good attention spans.

Some people describe A Fading Melody as a Braid rip-off. I think those people are wrong. I like to think of it as "Braid inspired." After all, we can't just call all artsy 2D platformers Braid rip-off