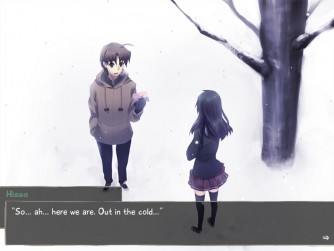 It’s December of your senior year, you’re in the snow with a classmate at her request. It’s the girl you like, and your heart is racing. You can’t think of anything good to say, but you smile as your chest aches. It brings poetic imagery to mind, even as your heart beats harder and harder. Amid the pain, she asks if you’d go out with her, but you’re speechless. You try to massage your throat, but you’re greeted with only pain. As she shouts your name, your body freezes save for your eyes, which widen in terror. The beating stops, you go weak in the knees, and the world fades to black amid the terrified screams of your classmate.

This is the start of the visual novel Katawa Shoujo, where you play Hisao, a young Japanese student who has to spend his last year of high school in a school for people with disabilities, teaching them how to be self-sufficient as well as academic knowledge. There he meets many people who all want his last year in school to be a wonderful time, and each works toward it. There are three pairs of girls; five of them are actual story routes, and whomever you choose becomes Hisao’s friend through the school year. Along the way you make other friends, and be a normal school boy.

The game was inspired by a concept sketch for a comic series that never picked up, but people on the 4chan board /a/ took a liking to the idea and started drawing fanart. From fanart came the fanfiction—people wrote about these characters that wouldn’t be used. From the fanfiction came finally some organization, and a dream was born. A team of anonymous people programmed, wrote, drew art, and composed music for a game about disabled girls finding love in high school. There was, however, one caveat: the game was actually really well written and handled a delicate issue with respect. 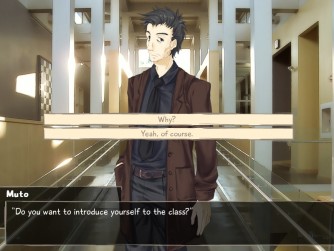 I feel this game receives a lot of undeserved flak from those who have heard of it, and even played it! It contains six touching stories about coping—and not coping, in the case of one—with disability; living a full life in the face of it; childhood love; and overcoming emotional boundaries. Each of the five girls features stories about how they’re more than their disabilities, the life they’ve lived, and the struggles they face. All of this gets overlooked because Hisao enters a sexual relationship with each of these girls, nevermind that sex is a healthy part of a relationship if both parties want it—however, that’s not a topic for this article. It just blows my mind that something perfectly normal gets in the way of five amazing stories. 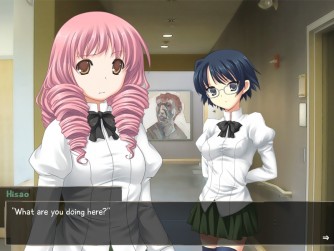 The ever energetic Misha (left) and the student council president Shizune (right), an inseparable duo. Only Shizune has a route.

The gameplay almost doesn’t exist: you click to advance the text amid changing graphics of whoever is talking, and make choices at certain moments. That should come as no surprise to veterans of the visual novel genre, as it is the standard. The art is consistent, beautiful, and crisp. It’s drawn in an anime style, but every character looks unique, and has distinct identifying features, and a style all their own. The music is wonderful, soft, and helps to heighten the atmosphere of the scenes you’re reading. There’s honestly almost nothing bad to say about this game, really. 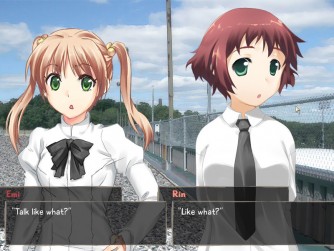 Track star Emi is consistently adorable, and mural painter Rin is an odd duck with a heart full of passion.

My only complaint is that you’re not able to have a route with any male characters—though the only male character Hisao interacts with enough to qualify is not exactly boyfriend material—and you can’t have any good endings that don’t result in a romantic and sexual relationship. But these are small complaints; the game is excellent and really great considering where it came from! 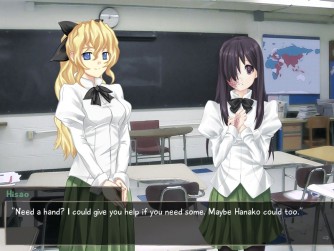 Class representative Lilly, and reading enthusiast Hanako round out the cast.

Would I recommend someone play this game? Of course I would! It should be a necessary read, in fact! That I gushed over it for six hundred words should speak as much! And the best part? It’s free! So go out and play it, and enjoy what’s probably the best free experience since sample day at the mall!