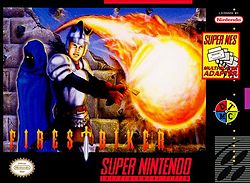 Do you know that moment when you’ve got nothing to do and you just feel like playing a random retro game? Well, let’s just say for confidentiality sake, I had one of those moments. While searching through a ROM list, I came across Firestriker for the SNES. The screenshot on the site looked like a classic RPG-style game, so I figured “heh, why not”. But once I opened that ROM, I had my whole world flipped at a 270 degree angle.

When you first start the game, you find yourself in the castle of the WIND element. This is one of four elemental castles that inhabit this vast world. You learn from the king that the world is being attacked by the evil wizard WYLDE. Yes, his name is WYLDE. It’s truly wild how they always have his name capitalized, but let’s move on. Trust me, it gets better.

After a good two minutes of talking (blame that on the slow text speed), you find yourself on the world map. Traveling a bit of a way, you have access to enter the forest. Now here comes the Mind Blow #1. When you enter the forest, it turns out the game isn’t an RPG, but in fact an action Block Breaker-style game! WHAT?! I HAVE TO REVIEW THIS!!! Ok, well, that was my reaction, but I’m staying loyal and doing my best to give a fair review. And if you don’t like what I have so far, then hit the back button and everyone wins. 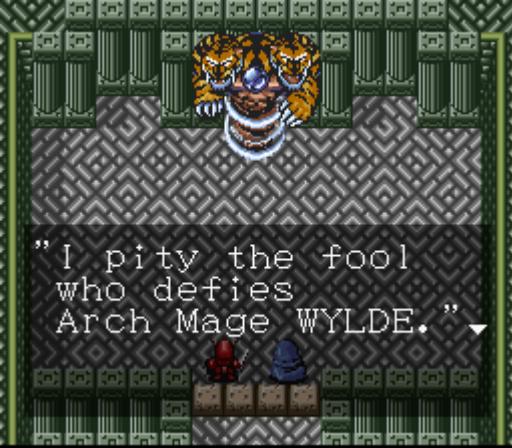 Going back to the subject of gamplay, the game follows a similar game mechanic as the classic Block Breaker game: use a bouncing ball to destroy blocks. Simple, right? Now let’s throw in some obstacles to make it entertaining. That’s right, we now have enemies roaming across the game board. This may prove to be a major challenge, but don’t fret. Here is where the game differs from Block Breaker—You can move around as you like! This game allows the player to roam the board freely and hit the ball from anywhere. This allows the player to strike the ball at a certain angle and location to get the precise outcome.

I pity the fool who hates this review!—Mr T (T as in Tiger, in photo on right)

Now, I’ll admit I only played this game for about 20 minutes, but I wanted to keep going. However, if that were the case, this review would have never been finished. Anyway, let’s get on to my opinion of the game. This time around, I’d like to focus on some key categories:

I’ll be the first to admit it—I wasn’t too happy about this game not being a standard RPG. However, where would we be if everything came standard? There would be no such thing as bonus footage; no such thing as extra lives; no such thing as Super Size at McDonalds. The point is, Firestriker took a lovable game genre and tweaked it to make something new. This kind of stuff is usually a hit-or-miss move, but I think they hit in a way. I’ll admit, some players may not be into this sort of thing, but there’s always those RPG/Pinball/Block Breaker gamers that would love the crap out of this game.

The controls in this game seem fairly simple, and maybe that’s where my problem lies. I mean, I’m the guy who would rather double-tap left or right in the Mega Man X series to dash instead of use the A button. Still, it’s not really where my problem lies. My problem is more with the excessive amount of buttons synced to the sword. You have 2 buttons to use a sword? Maybe it’s a sign. My other problem is how you control the second player if you are playing Single Player. By using L or R, you can move him left or right to block your safe zone. Maybe it’s just the fact that I was playing this game on an emulator and using the keyboard instead of a gamepad, but I found the controls to be a bit difficult to get used to.

I’m not really sure if this could count as a field in SNES games, but I find it important to note for this game. Whether you are playing this game for the first time or the tenth time, you’ll notice a common theme with the orb: it has some funky physics. I mean, you can hit it clean to the right, and it will somehow bounce upward. After a while, it will just stop out of nowhere, and start rolling straight down. Another thing I would like to point out is how the orb reacts after hitting a destroyable block. Funny how when it hits, it doesn’t bounce back in the same direction…actually, I do believe that is a good point. Still, the bad point is when you hit the block, the orb somehow increases speed. I’m not sure if it’s just my experience with the game, but I found the physics in this game to be a little loopy.

Now I’ll be the first to admit it; this game isn’t exactly a Mainstream Moneymaker. If it was, it wouldn’t be reviewed on the site, right? Still, in all seriousness, I think this game has a simple concept, but also added bits and pieces of a beloved classic to make it fun and exciting. Apart from the weird graphics, the stimulating excessive sword controls, and the weird bosses that quote celebrities, I found myself wanting to play this game for hours. So if you have A LOT of time on your hands, and you’re feeling a little retro in your rump (I guess), then go ahead and give this game a go!

Michael Gray is really getting behind on reviewing Nancy Drew games.