The Fairy Tale Detective has been summoned to Italy, where an evil witch known as Godmother has been turning young women into glass. Godmother wants to find a Cinderella and steal her soul in order to resurrect her dead husband, Gepetto. Naturally, Gepetto is planning on conquering the world with his army of puppets, and the only way to stop him is to solve hidden object challenges while his puppets stand around and look menacing.

This is Dark Parables: The Final Cinderella. The story might sound ridiculous, but it’s actually pretty good. You can expect a decent revelation or plot twist at the end of every chapter, accompanied by a pretty cutscene. The plotline is supplemented by a series of bonus stories, which are unlocked by finding the 36 collectibles that are hidden throughout the game.

At least, the game pretends they are hidden collectibles. In reality, all the collectibles are in plain sight, and it’s harder to miss them than it is to find them. Also, I question their status as collectibles when 20 of these alleged “bonus” items are mandatory. Still, collecting them all is a fun challenge, and I enjoyed the small bonus stories you get every time you collect four. It’s like when cheeseburger restaurants offer rewards cards—now you get occasional rewards for what you were already doing. 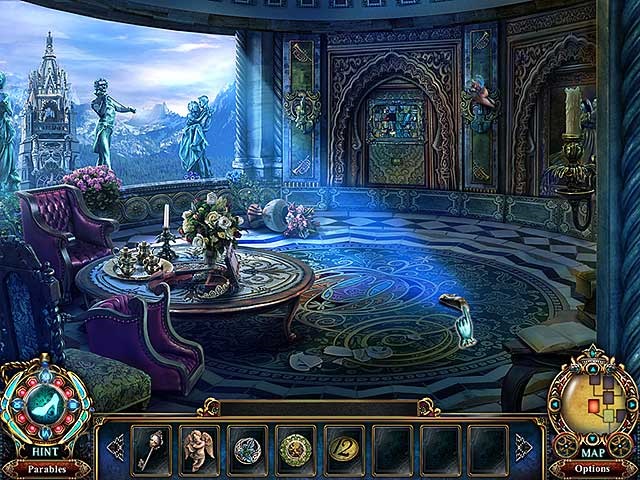 The game’s environment is nice-looking, and it is neatly divided into chapters about ten to twenty minutes long. I particularly like the sense of exploration that comes with visiting new areas in each chapter. Unfortunately, by the time you’re two-thirds of the way through the game, you have unlocked every single area. Inertia then sets in, as you do a lot of backtracking and revisiting old locations.

The gameplay starts to slow down at this point. The earlier chapters have a nice variety in terms of what you have to do to proceed. The later chapters all have the same meta-puzzle: find four identical items of different colors in order to proceed. It’s not that the game did things poorly, but when the overarching puzzle is exactly the same in each chapter, it loses some of the effect.

Oddly enough, though, this is the same point at which the storyline really picks up. So I’m not sure how to accurately describe the final third of the game. It’s like eating a trio of delicious cheeseburgers, and the final cheeseburger has the exact same bread and patty as the first two, so you’re a little sick of them at this point, but oh my gosh, they have a new type of cheese on this burger, and it is amazing! Does the great cheese make up for the fact that the rest of the burger is a little lacking? And it’s not that the other ingredients are bad, per se; you liked them just fine the first two times, but you were expecting a bit more variety. You blame the chef—he led you to believe there would be more variety, because he keeps changing the cheese and the relish with each new burger. So, why didn’t he change the buns and patty?

Either way, you’re going to eat your burger, and you’ll like it. You’ll feel satisfied, but a small part of you wishes that they had switched out the poppy seed bun on the third burger. That’s all.

As a side note, other reviewers tell me that the cheeseburger metaphor works for the Dark Parables series as a whole. It has minor variety, but each entry is still mostly the same as the previous games in the series. 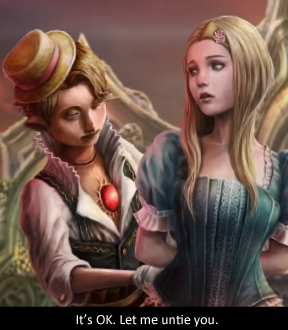 This game believes that Cinderella/Pinocchio is the best fairytale relationship of all time.

So, the visuals are good, the storyline is great, and the gameplay is pretty solid, though a bit lacking at the end. The only thing left to talk about are the hidden objects challenges.

Yes, this is a hidden object challenge game. You’ll have two to four hidden object challenges per chapter. It’s sort of like buying a cheeseburger, then having to pay extra money for fries. You’ll still eat the fries, but part of you is unhappy and grumbling because fries should come included with the drink and the burger. You’ll grumble extra-loud at the final third of the game, when the hidden object fries make up more of the meal than the adventure burger.

(As a side note, AdventureBurger.com is a videogame website that keeps track of adventure games which have been funded through Kickstarter. Adventure Burger goes great with a drink from GameCola.)

Morphing objects seems to be a trend in hidden object games now, and this game has twenty of them scattered throughout the game. I didn’t enjoy searching for them, but I did like finding them. Every time you find a morphing object, the hint meter refills faster. Towards the end of the game, you’ll be getting a free hint every 10 seconds, which means you can plow through the hidden object challenges without much trouble. 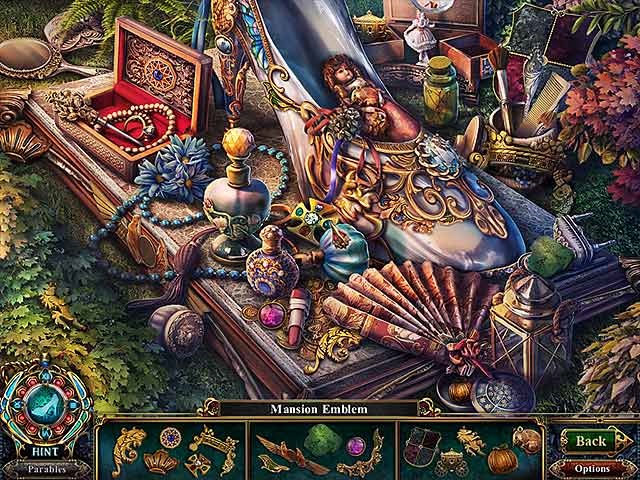 In conclusion, I give this game seven burgers out of ten, and I encourage the game’s creators to try switching out the poppy seed bun for a whole wheat bun.

Matt Gardner and Paul Franzen, two of GameCola's head honchos, don't need to purchase their own video games very often.  This isn't because their webazine is so marvelously famous that publishers are