Every once in a while, I feel like there isn’t enough pain in my life and I decide that it’s time to take a crack at an old RPG. My go-to game to play for a few hours and then give up on has always been Dragon Warrior IV, but I decided I’d had enough of that old chestnut. I wanted something new and different. Something exciting—something I’d never played before.

So, I chose Dragon Warrior II.

It’s a bit surprising even to me that I’d never played this one back in the day. I grew up on the original Dragon Warrior, and I’ve put countless hours into never beating Dragon Warrior IV. I had rented Dragon Warrior III just before my local grocery store stopped renting out NES games. I’m pretty sure I even have a copy of Dragon Warrior II around here somewhere, but for one reason or another, I had never crinkled those pins into place.

I was a little surprised by the graphics. After the clearly Americanized opening screen, the in-game graphics actually look like a downgrade from the original Dragon Warrior. I knew that the first game had received a makeover before arriving in the States, but the sequel apparently stayed closer to its Japanese counterpart. The sprites look a little more gaunt and less distinguishable, and the map tiles are a little flatter. I was halfway through the game before I realized that the blank, white rectangles in some of the rooms were supposed to be beds. Whatever art budget they had must have gone into the battle sprites, as the monsters are the only graphical part of the game that is moderately impressive. I can imagine that Akira Toriyama doesn’t come cheap. 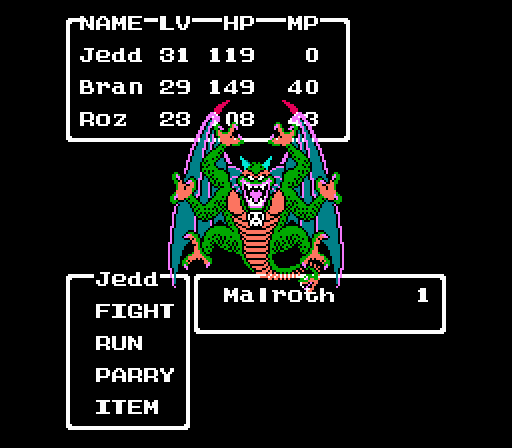 Malroth…or, maybe some form of Cell from Dragon Ball Z.

The game delivered exactly what I was looking for, though. There’s a story featuring the descendants of a legendary hero venturing out to save the world from an evil wizard. There’s a world full of challenges to overcome. There’s hours of excitement. I wanted to play a JRPG from the late ’80s, and no series does it better than Dragon Warrior.

There were two things I was impressed by, however. The first was the world design. After the first part of the story, the world opens up and you’re able to progress through your quest in a nonlinear manner. Usually, even in the games I’ve played up through the SNES and PlayStation eras (And likely beyond), an “open, nonlinear world” actually translates to, “There are areas where your party is going to get wiped out if you accidentally step off the ship.” You pretty much always end up playing the game in the same sequence, even if you could theoretically do the sidequests out of order. Even Dragon Warrior IV, a later game in the series, is linear for most of the game due to the way the story is set up.

In Dragon Warrior II, you’re encouraged to explore. The world map is huge, and most places have something of value immediately, but also something hidden. You do end up revisiting basically every town in the world, but there’s generally enough satisfaction at each location that it doesn’t turn into an annoyance. It’s also nice to see an RPG where every town along the way isn’t just a one-time event with no further purpose the moment you leave. Each town usually at least has a locked door or a fetch quest that you can return for. 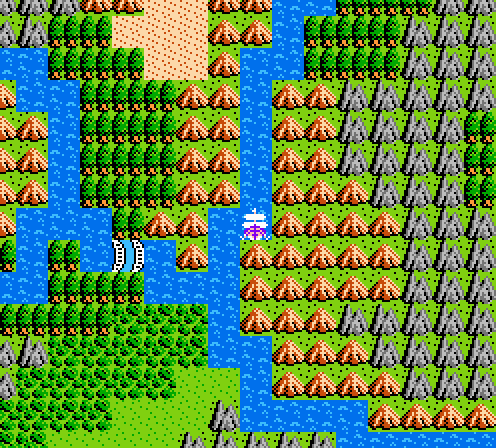 Most of the enemies throughout the world are the same. This is balanced very well with the level progression, as early levels only give minor upgrades. Your stats are kept relatively flat, so as you progress through your quests, you only gradually gain ground on the enemies. By the time you’ve collected the Five MacGuffins, proven yourself as a Descendant of the Legendary Hero, and equipped yourself with all of the Legendary Armor, you’re only finally able to complete your average trek around the world map without worrying.

But, that’s when things get switched up. You’re done with the various quests and ready to head towards the final boss. You only barely survived the dungeon leading to the final area, but you made it to the last save point and got healed up. Here it is. The moment you’ve been waiting for! Time to cruise on up to that castle and show Hargon what’s what.

And you can’t do it. You can barely survive one or two of the average battles on the field before crawling back to the save point and praying that nothing else pops up on the way there.

This brings me to the second point I was impressed by. The designers obviously put a lot of work into planning out how much of a stat increase each level would give, how much EXP you would gain per battle, and how much was required to level. Back on the overworld, levels were few and far between. The battles may have been easy, but sitting through twenty or thirty battles to level up was ridiculous. Yet here you are, having trouble with the final area. At the same time, each battle is giving you thousands of experience points, compared to the maybe 200 or 300 you were gaining before, and the stats you’re gaining per level are through the roof. After a little grinding, you’re able to stand more than one or two battles. The rate of progression is very satisfying—you may be grinding, but the challenging battles and rewarding levels almost make it worth sitting through.

The levels eventually slow down a bit and you’re finally able to make it to the boss’ castle. It’ll probably take a couple trips, but it’s a good challenge. It’s not a breeze, but it’s not an impossible nightmare, either. You’re expected to make good use of items and spells to survive to the final boss. It ends up feeling more like a puzzle than your usual “mash A and occasionally use a potion” RPG battle. You can tell that they learned a lot from their work on the original Dragon Warrior, and it’s interesting to see the progression. 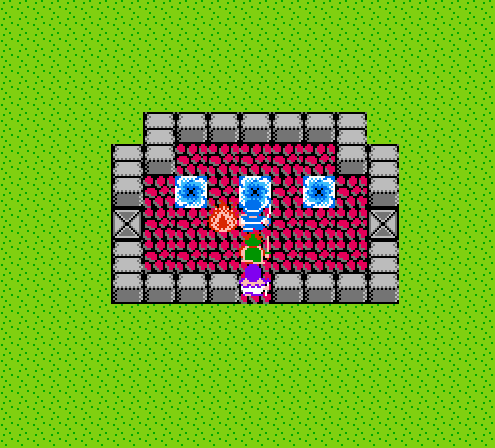 Classic NES level design is in full effect. Click to see where they placed the hidden Crest, required to progress.

For me, the game was worth playing. It’s an odd thing to find a classic RPG that I haven’t played, and have it end up being good. I was lucky enough to play most of the good ones when they were new—and given the nature of the genre, that usually means that the bad ones are completely unplayable these days. While the game is enjoyable for someone looking for a reason to press A and occasionally see words like “sword” or “dragon” appear on the screen, there’s not much that really stands out about the game. The graphics are worse than the original, the music is about par, and while the last couple of hours (75% of which is grinding) are challenging and rewarding in a way, most of the game is still just a bunch of wandering around and running into random battles.

It can be difficult to rate old games; trying to balance how they were seen at their release versus how well they’ve aged, all while trying to avoid the tinge of nostalgia. In the end, I have to give this one a 4/10. 2 out of 5. 40%. Zirconium out of fermium. Lime green out of violet. A gentle spring day out of blistering summer. A Dragon Warrior II out of Gravity Rush. The game is all right, but that’s about it.

That said, it’s time for me to peace out. I don’t need some throne. I’m out of here. Time to go kill some ants or something; drink a few potions. 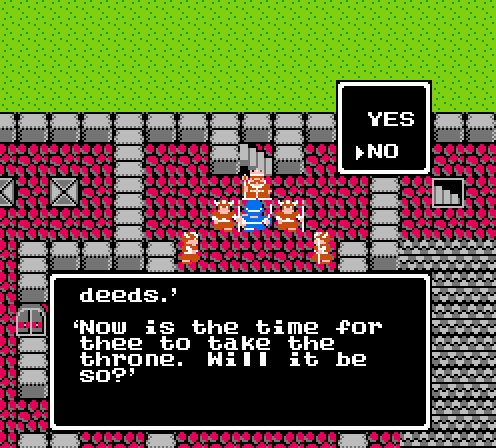 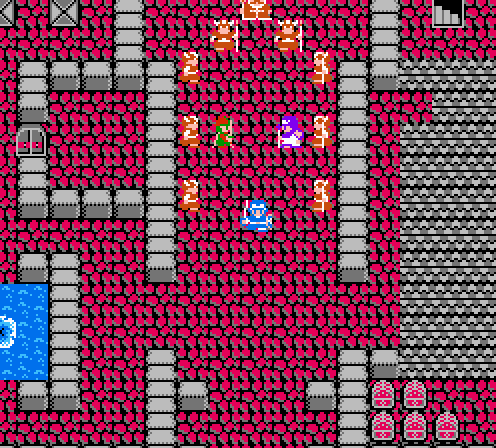 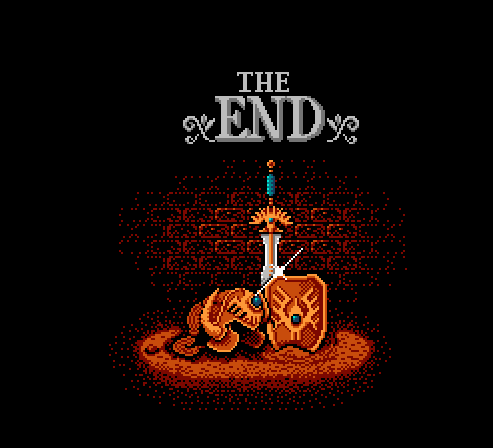 Ah, Secret of Evermore: Square of America 's misunderstood child. To me, this game has always been as mysterious as it is hard to review. I remember seeing the game in a store when it first came out a