“Take care and tempt not the fates”

I’ll tempt whatever I want, thanks, and not because you told me not to. I do what I want, when I want, and right now, I want to review Dragon Warrior IV.

One of you may remember my review of the original Dragon Warrior. (Thanks for always reading my reviews, Mom!) When I was naught but the littlest of dudes, Dragon Warrior appealed to the dragon warrior within me. I would go out in the yard and find a stick and act out my favorite scenes from the game. Like, hitting things with a stick. Or, walking. Or, standing on stairs and having to enter the menu in order to climb them.

There would always be a little dragon warrior deep inside me, hidden away as I moved on to other games and other systems. The Super Nintendo was released, and with it came Final Fantasy II. And in the midst of hitting things with sticks, walking, and climbing stairs without having to enter the menu for once, guys, I was suddenly taken back!

Dragon Warrior IV was released for the Nintendo Entertainment System.

More than a year after the Super Nintendo had come out. 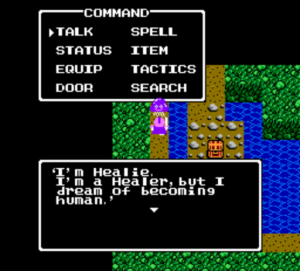 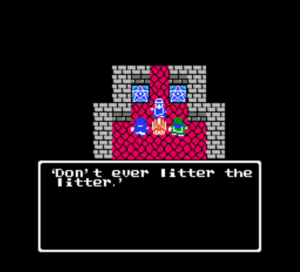 The controls were still awful. The graphics were straight out of 1989. And, why was I playing on a Nintendo that was very much not Super?! My 6-year-old brain could hardly comprehend the implications!

Despite all reason toward the contrary, a little piece of me was overjoyed at the sight of another Dragon Warrior. Sure, I still had to enter the menu to talk to anyone, open doors, inspect things, or breathe. Yes, dealing with NPCs required more menu navigation than changing your privacy settings on Facebook. But, I could climb stairs without entering the menu. That in itself somehow made everything else all right.

In the same vein as later Mega Man games, I could forgive graphics for being sub-par for such a late NES game. Rather, that is, I can forgive them. At the time, I forgave them because I was an easy-to-please six-year-old and lacked the understanding that they were just being lazy. The game looks essentially the same as the original Dragon Warrior, but when has Dragon Warrior ever exceeded expectations?

1992—that’s when. Dragon Warrior IV set itself apart from other games of its era with its story. While hardly an epic comparable to Gilgamesh, the Odyssey, or Chrono Trigger, it contained a number of features unique for its time.

Half of the game goes by before you even meet the hero, a fact that led to much confusion and resetting of the game for my six-year-old self as the first character you play doesn’t have the name you just entered. Four groups head through their own storylines explaining how they come together. I always found this part to be incredibly fun, as most games waste all of the character development early on, both in terms of story and of leveling. Playing each group individually extends that golden period before arriving at the late-level grind-fest that plagues RPGs to this day. While not entirely avoided, Dragon Warrior IV manages to put it off further than most games, at a time when the grind-fest was an industry-certified method of increasing play time discussed at length in user manuals, promotional literature, and peer-reviewed journals. 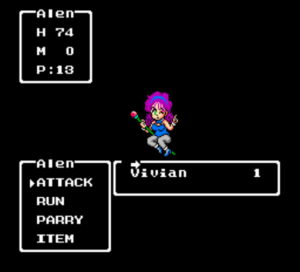 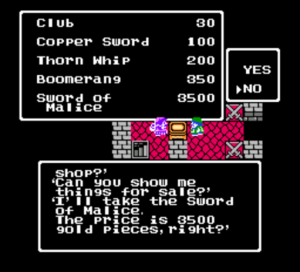 Another unique feature was the surprisingly varied gameplay throughout the game. My favorite part will always be playing the merchant, buying and selling equipment to NPC shoppers. There’s also a casino with a number of minigames, a feature that became popular in later RPGs. While large portions of the game still revolved around extensive mashing of the A button, the inclusion of anything else to do was a shock at the game’s release.

The final chapter of the game allowed for changing out party members on the fly—something I don’t remember seeing before or again until Final Fantasy VI. The tactical system Dragon Warrior employed to control party members after that point was a little odd, but I’ll accept that in exchange for the ability to choose whoever I want to be in my party. The uncontrolled characters would regularly use odd skills or actions, which could potentially be annoying, but if Kingdom Hearts can get away with that, I’ll let it slide for ol’ DW4.

TL;DR? Fine. Let me break it down for you. That’s right, Paul Franzen, I’m bringing back the component scores, and there’s nothing you can do about it! Except, perhaps, edit this section out. But, hopefully, you won’t do that. Have I ever told you how much I like writing for GameCola?

Fun: 6—I’ve always enjoyed this game. While there’s plenty of grind-fest and A-mashing, there’s enough going on in the game to mix it up and keep it on the fun side.

Novelty: 6—Beneath the veneer of a generic JRPG hides an actual generic JRPG, but with a hint of creativity. It’s no Katamari Damacy, but it did introduce a few features that would become popular in later games.

Audio: 7—Dragon Warrior IV actually has some of my favorite music for the NES. The Dragon Warrior series has a clean and simple styling to its music that makes it memorable and recognizable. The music is pretty much the only “Good” aspect of the game.

Visuals: 4—The graphics, on the other hand, are essentially the same as they’ve always been for Dragon Warrior. The enemy graphics during battle help keep this score from being lower, but there is little to impress the player throughout most of the game.

Controls: 2—A game for the menu-lover in all of us.

Replay: 5—While I’ve played the game through a number of times, there’s not much different in any given play. It’s about what you’d expect from a JRPG.

Overall: 5—Better than the original Dee-Dub, at least. While there’s quite a bit going for it, with new features and creative AI, Dragon Warrior IV is held back by essentially being a mod of the original game. I guess that never held Mega Man back, but at least Mega Man was a good game to begin with. Like baseball, this game will have trouble holding the attention of the modern gamer, but unlike baseball, I’d say it’s worth playing at least once.

Sigh. I can’t even write a controversial review anymore. Where’s Meteo when you need him? I’ll never get Employee of the Year again.

Wario's come a long way from this first starring role.