Many RPGs have ultimate weapons in some form or another. These can serve the purpose of progressing the story, or giving the player a sudden increase in power to make them actually feel stronger.

I don’t think ultimate weapons are an inherently good or bad thing to keep. What I want to look at today is their significance and the means of obtaining them.

There are many ways for players to get ultimate weapons. If you are going to include one in a game of your own creation, consider this: How do you want it to be obtained? 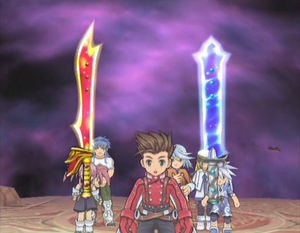 I get that they didn’t want him to go cross-eyed, but can’t he at least look at the swords, instead of between them?

In Tales of Symphonia, Lloyd’s ultimate weapon, the Material Blade, is given to him through the events of the game’s story unfolding.

Giving the player the ultimate weapon in a plot-required cutscene is not at all a bad thing. The best thing is that if this method is chosen for the ultimate weapon, you can’t not get it. Getting it is just a step on the path to completing the game.

At the same time, this means the player don’t need to get distracted by 50 sidequests to get the weapon. Consider how much work the player should have to go through to get it—should they have to work very hard on an unrelated arc? Or should it be given to them anyways?

One more note about this: You really should do this if the weapon is required to clear the game. If you have a “(Final boss) can only be defeated by (weapon)”, you should really give that weapon to the player, or else they’ll get to the boss without said weapon, lose, and get stuck. They’ll probably feel frustrated or confused, and if they haven’t been given adequate clues to figure out where the missing (and also mandatory) weapon is, they’ll probably pull out a walkthrough.

A separate note about the Material Blade itself. While it holds very significant story value, in terms of actual stats, its not the best weapon in the game. Far from it, actually—it has a slash/thrust* value of 820/820. But it is outclasssed by other weapons:

*Attack values are calculated in slash and thrust values for the main character. Even though you can feasibly slash and thrust with any other character using a sword. I feel like this really takes away from the value of having an ultimate weapon at all. Why build up all the tension and hype for a weapon, only for there to be an assortment of weapons that are better than it? Well, there’s more to it than that, as well.

In this example, we have an ultimate weapon given to the player in a cutscene. Ask yourself this: If the player works hard on an endgame sidequest, do they deserve to have a better weapon? Or should the ultimate weapon be the be-all, end-all weapon?

If your answer is “no”, then many players would feel that working hard on a weapon may not be worth their time, since the ultimate weapon (which, in this circumstance, is just handed to them) would replace it anyway. 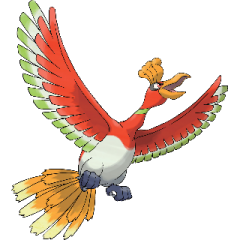 Does this count? I’m not really sure. They’re not “weapons” per se (except maybe Aegislash), but they are ultimate, that’s for sure.

While the circumstances and scenarios for catching each legendary Pokémon is different, there are a few things that are intentionally kept the same:

Including Pokémon in this imposes a very different issue altogether—many of us choose not to use legendary Pokémon. Often times, we will catch the Pokémon, and then never actually use it. Perhaps we see the use of a legendary Pokémon as a hollow victory—a cheap way to win all of the obstacles in a game that’s already not all that difficult. But, I ask you: How many other RPGs do you know of where you go out of your way to obtain a legendary weapon, then actively choose not to use it? 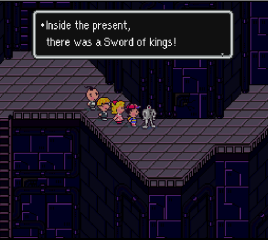 This is probably the only time in an RPG where there is a sword that is an ultimate weapon, but doesn’t belong to the main character.

The Sword of Kings is a rare drop obtained from the Starman Super. And when I say rare, its drop rate is 1/128 (or 0.78%). It’s absolutely brutal. In order to get this weapon, you’re probably going to have to fight these monsters for a few hours.

Also, it drops from Starman Supers specifically—which is fine, except that there are other enemies around here as well. You’ll have to take them down, but doing so doesn’t bring you any closer to the weapon at all. They’re just an obstacle in the way to take up your time.

As a whole, I’m not a fan of this concept.

However, there is one thing I will give credit here for. If the drop rates are not in the player’s favor, and they have to spend hours just to get it (which no one other than Kid Jeddy would want to, but end up doing it anyways), they will probably gain quite a few levels. If the goal of the game developer is for the player party to become stronger after obtaining the weapon, then this is the best way to do it. Its not uncommon for EarthBound players to gain 10 to 20 levels getting this sword—in a game where many finish in the 70-80 range and the cap is 99.

Many games will go about handling their ultimate weapon differently. This article only contains three examples of such weapons, and they’re some of the more out-there examples. However, while it may just seem like some story padding needed to push an RPG into the 20-40 hour range, there’s a lot of thought that should go into it. How much effort should one have to exert to get it? Is it right to have weapons stronger than it? How much stronger does the party become with said weapon in their possession? Will the player even feel inclined to use it to begin with?

Just make it look nice. I think we can all agree that a nice-looking ultimate weapon is inherently a good thing.

The shell is bigger than he is.

Firstly, I should say that I am enrolled in the school of thought where I am right and you are wrong if you don't happen to agree with me. With that out of the way, I'll give you all the real definiti ...