I was at the local library the other day, when I saw a copy of Miles Edgeworth: Ace Attorney: Investigations: The Manga: Volume Three: Colon Overload. It’s a comic book based on the 2010 Phoenix Wright spinoff where famous lawyer Miles Edgeworth does absolutely no legal work whatsoever.

I immediately knew this would be a good  reason to revive “Oh, the Humanity!“, the column where we review videogame-based movies and books. I got dibs on reviewing this book; Diana can take care of Spy Kids 3D.

Episodes 14 and 15 make up a two-volume story entitled Turnabout New Year. The story is basically a murder mystery that the reader can solve along with our heroes. Or at least, the Japanese readers can solve the mystery along with the heroes. As you’ll see, the American readers don’t have a chance at figuring things out.

The best scene in the entire case.

Episode 14 is the setup. It’s a few days after New Year’s, and Detective Gumshoe is celebrating with a sugoroku. He gets summoned to a local toy company, where the company president has committed ritualistic Japanese suicide. Along with his plucky sidekick Officer Hammer (who?), he investigates the crime scene. 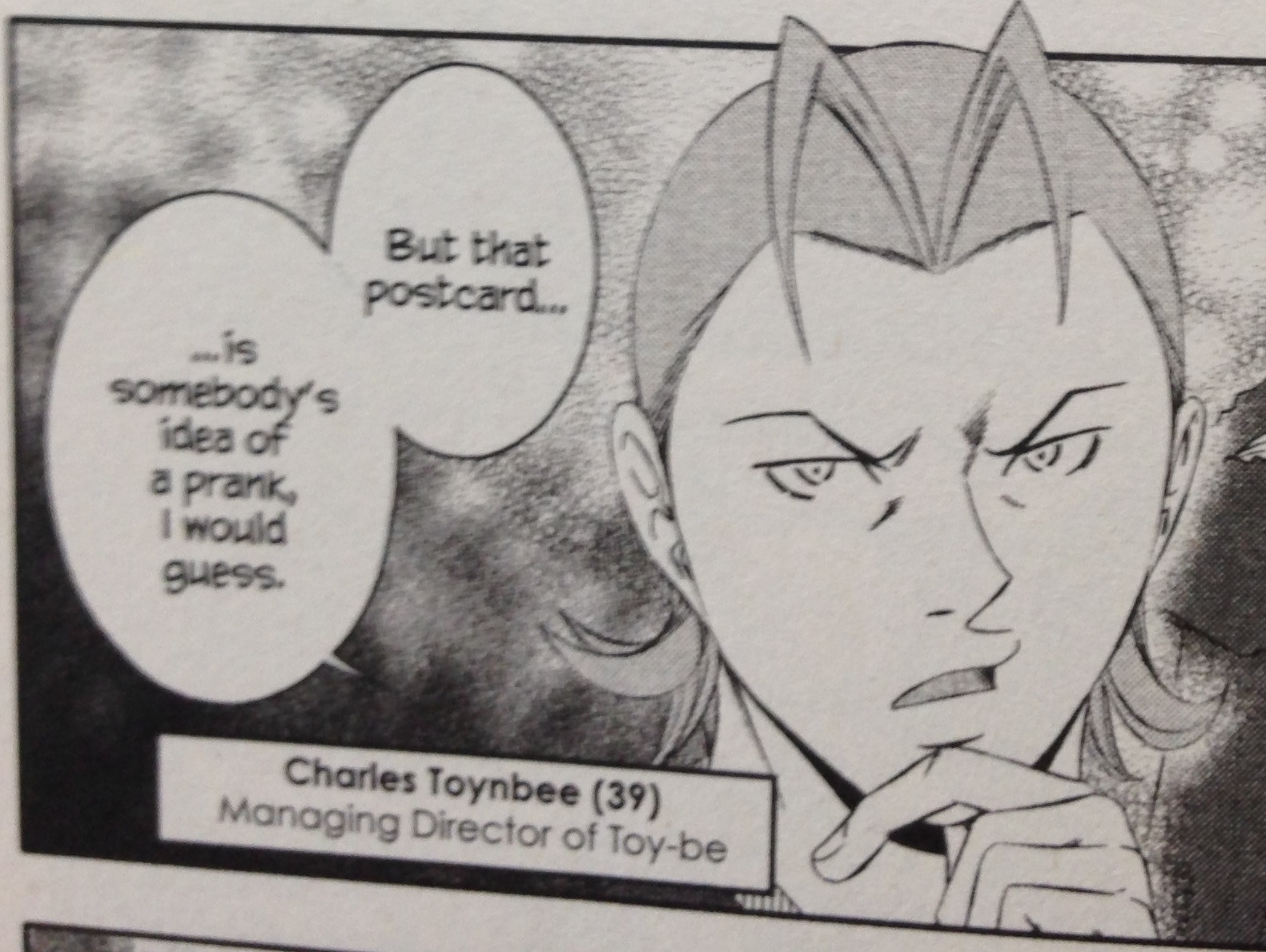 Gee. Could he be the culprit?

Boy, this is a difficult case! In Episode 15, Miles Edgeworth investigates the crime scene. Ema Skye shows up, too, so she can check for blood and fingerprints. She examines the victim’s toy case and finds…

Edgeworth solves the mystery at this point, and he summons everyone to the office so he can explain everything. 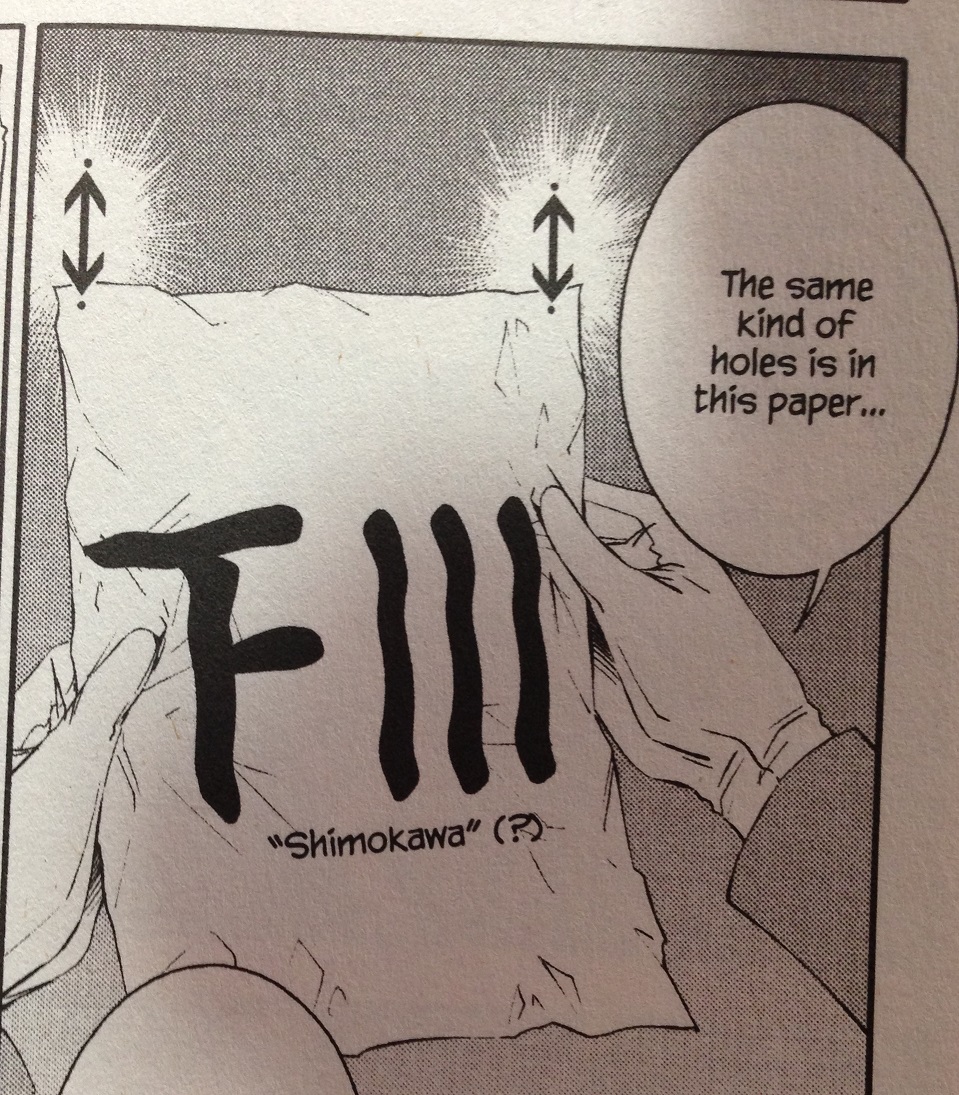 So we have a piece of paper that reads 3-3. It must be a scorecard of some sort, which means the victim pushed his desk aside so he could play Japanese Badminton. The lack of fingerprints on the battledores indicates that the murderer was his opponent, who later wiped all the prints off.

But everyone has an alibi for New Year’s Eve! Edgeworth and his large hair explain that contradiction. The culprit clearly stole New Year’s cards from the mailroom ahead of time, then planted them on the victim’s desk to make it seem like the murder occurred a few days afterwards. This is proven by the overly-festive card, which must be an American Christmas card that was cut into the shape of a Japanese New Year’s card.

Are you sick of these unexplained Japanese things being crucial to the murder mystery? Because Edgeworth isn’t done yet. The hair on the back of the victim’s head was messed up, so he must have been wearing a blindfold to play fukuwarai. Since blood was found on the game, we know the culprit killed the blindfolded victim while he was playing. 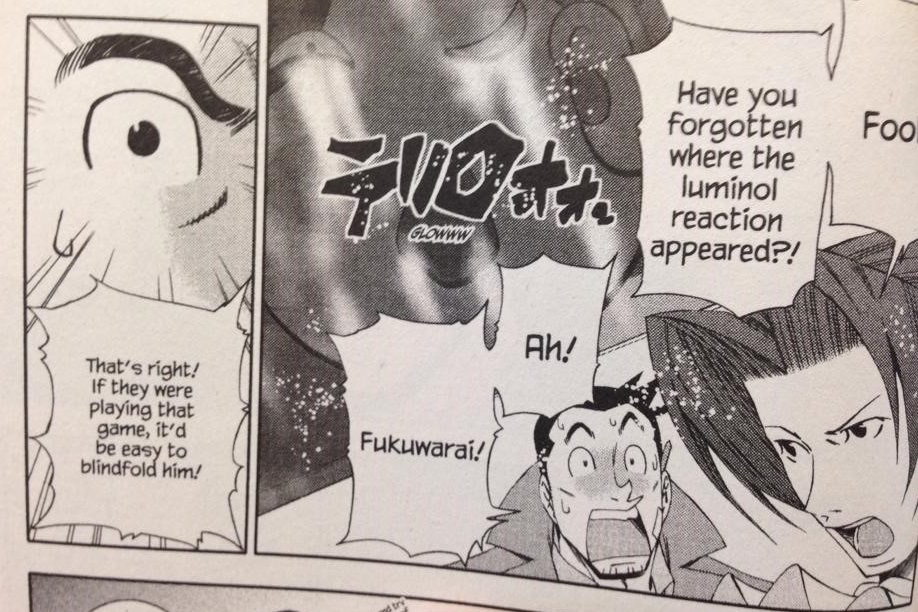 Edgeworth fingers Obviously Evil Employee at this point, on the grounds that the hair on the back of his head was also messed up. Obviously Evil refuses to confess, so Edgeworth deals the final blow. The tangerine on the rice cakes on the Shinto altar—which has never been mentioned until just now—is not in the correct place. It must have been knocked off during the badminton game, which is why they stopped the game at a 3-3 tie, instead of playing to completion.

Edgeworth calls for a forensic examination of the Shinto altar, and the culprit confesses. After this, our heroes celebrate the victory and the new year with a sugoroku competition. The end.

As a mystery, this story is a failure in two ways. First, it breaks one of the cardinal rules of mysteries, which is, “you can’t hide vital information until the very end, because that makes it impossible for readers to solve the mystery ahead of time”. Second, the story tries to keep the culprit’s identity hidden, but it does an incredibly awful job at doing so; pretty much anyone can tell that the culprit is the evil-looking person who uses curse words to describe the victim. 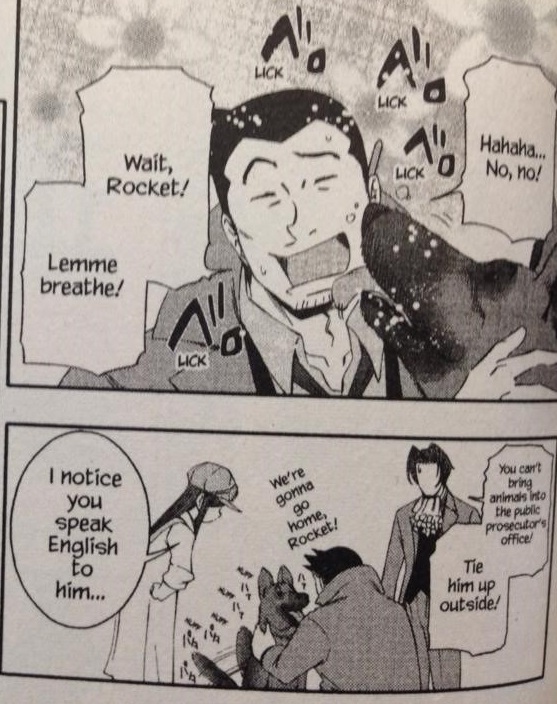 Whoa! Gumshoe knows how to speak English? He’s smarter than I thought! Also, I think they forgot to draw Edgeworth’s face in the second panel.

As a translated story, this is also a failure. The entire mystery hinges around several pieces of Japanese culture that are never explained to the non-Japanese audience. The notes at the end of the book do not help, as they fail to discuss several important clues, such as Japanese Badminton, Japanese number shorthand, and Shinto altars.

Footnotes, people. Subtitles. Maybe even a page that discusses Japanese traditions. Give me more than “fukuwarai is similar to Pin the Tail on the Donkey“. If I need to know that fukuwarai players are blindfolded, then tell me so! I’ve never celebrated Japanese New Year, so I’m at a loss here. Yes, I know the story was originally done in Japanese for a Japanese audience, but you’re releasing it in English, so you should put at least some effort into having it make sense to an English audience.

But, um…at least Edgeworth is in the story? 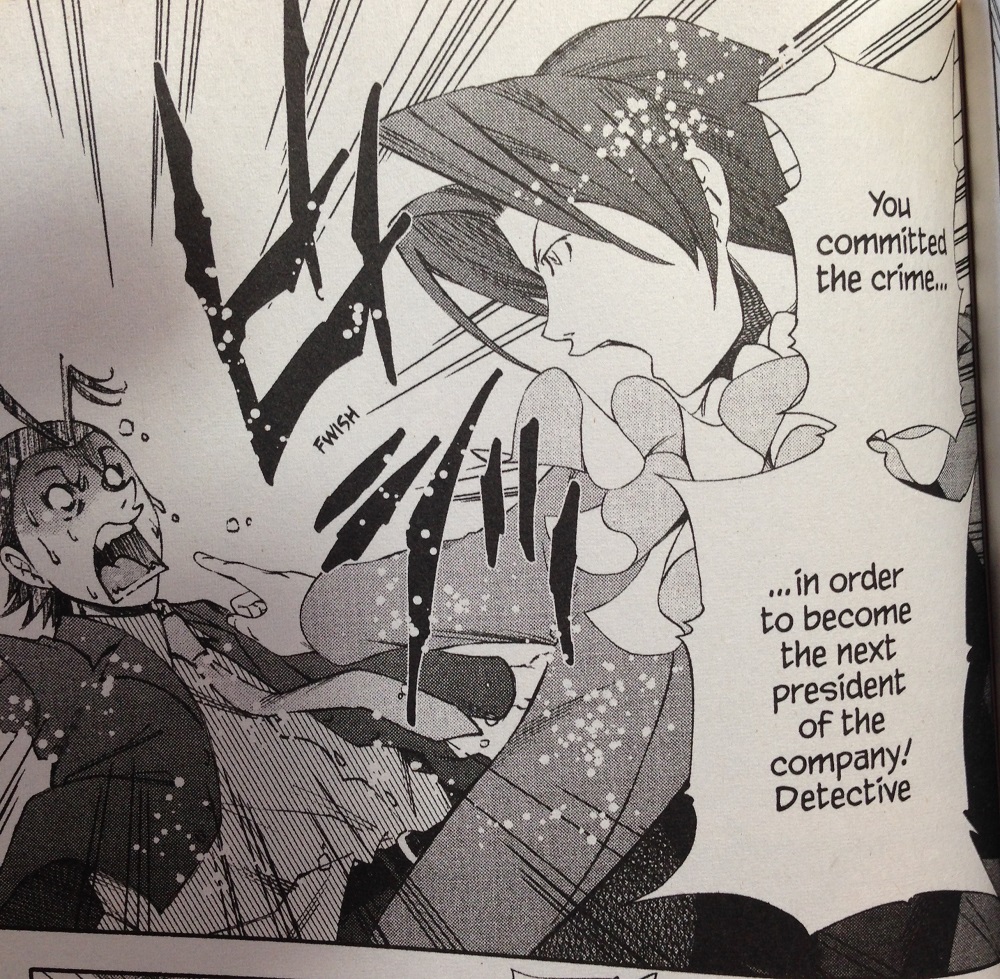 Edgeworth is too cool to finish his sentences.

A fan of the Final Fantasy series? Maybe not after you play this one...