OMG Zombies! is essentially a game of dominoes, if you replaced all the dominoes with people and the people exploded into various oozing pieces. So, just like dominoes, really. You have an extremely limited number of shots and a full screen of zombies to exterminate. In most zombie games, this would be accomplished by shooting every zombie with every bullet in the world until the screen looks a blood bank and a body parts emporium exploded, which was really their fault for building them so close together next to that fireworks and gasoline warehouse. OMG Zombies! also happens to be the first zombie game where the zombies themselves are sort of over zombies, because each zombie you kill will die in a way that can kill other zombies. Your goal is to set off the best chain reaction as possible to clear as many zombies as you can with your limited shots. See? Zombie dominoes. Zomdominoes. Zombinoes? Whatever you want to call it, this simple setup is stupidly addictive.

And I really need to put a heavy emphasis on the word “stupidly”, because the whole experience is completely mindless. You shoot a zombie, sit back, and hope things on screen keep exploding. There are eight different zombie types and each of the zombies have different ways of dying, so there is some strategy as to which kind you should target and when you should target them. Normal zombies explode, fat zombies explode fat-ily, cop zombies shoot their gun in a straight line, and army zombies shoot off shots that ricochet off targets and go on to cause more damage in a random direction. So, now you have a whole slew of questions to tackle. Which zombie to shoot? Should I wait to shoot a cop zombie when multiple targets are lined up or take my chances with the randomness that comes from an army zombie? And, most importantly, who the hell keeps giving these zombies guns? The zombies are better armed than most Montana militias and are only slightly smellier. Realistically though, you’ll just pick a zombie that looks at you the wrong way and hope for the best as that does enough damage to clear out large chunks of most levels anyway. 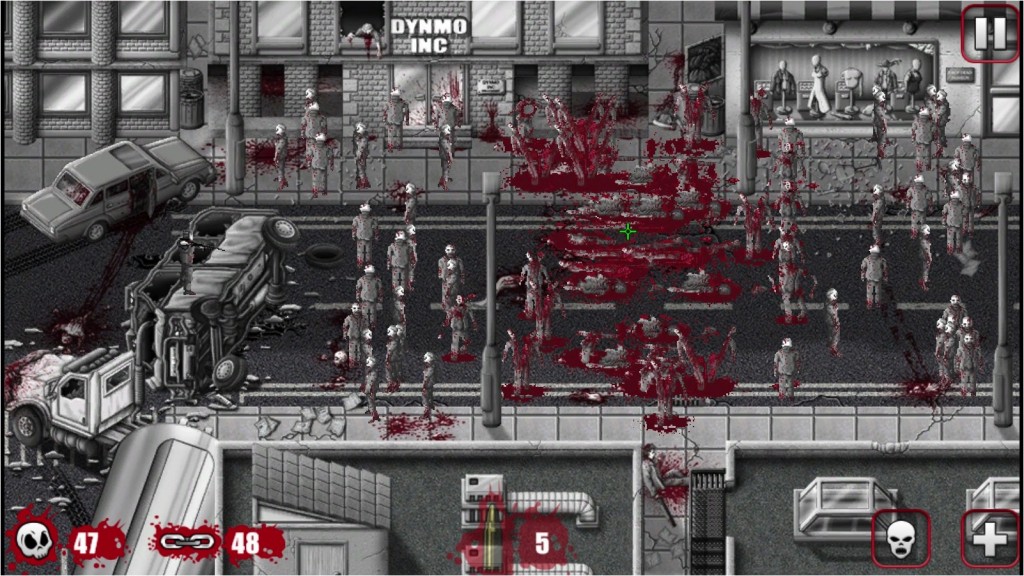 And…uh…that’s it. It is 100 levels of shooting a zombie and seeing what happens after. You can upgrade your zombies along the way, causing them to have a larger range of attack, cause more damage, or even have levels become more populated so you don’t have to worry about as many little gaps that act as buffers for the carnage. There are different backgrounds and different combinations of zombies, but really everything you can see from the game comes from the first second of gameplay, and everything else is more of exactly that. The most bizarre thing about all of this is that for some reason I still kind of liked it. There is no reason that sitting through 100 levels of watching zombies explode should be fun, but I found it oddly addictive. I went through and got all the upgrades, completed all the levels, and went back to get the highest score on every area by making sure each and every zombie was cleared out. I had a thirst, and the only thing that could quench it was more zombie blood. This is a game with no depth, no complexity to gameplay, and no way to escape its grip until you’ve finished each and every level.

This game is actually an HD remake of a downloadable title for the PSP, meaning that nobody has ever heard of it before, not even the people who worked on it back then. Well, except for us. That is how outside the mainstream we are. “So, what is new to this version of the game?”, you might be asking if you’re Mark Freedman or one of the two people who saw him playing it on a bus one time. Well, weirdo bus stalker, the big difference is that this time around the designers went all out and added “ombie” to original title of “OMG-Z“. Well, I guess there is some other stuff too. There are more levels, more endings, more upgrades, and completely redrawn HD visuals. I didn’t notice much of a difference, because both the original version and this version seem to be desperately aping the look that The Walking Dead comic strip has, right down to the black-and-white aesthetic. For the most part the changes are relatively minor and, while this is the most complete version of the game, if you already played the original I’m not sure there is enough here to justify a second go around. 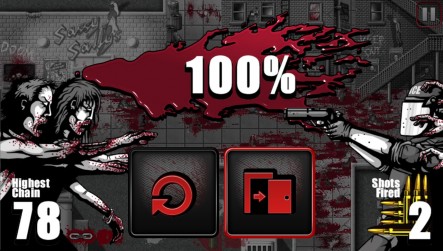 There is no reason that I liked this game as much as I did. OMG Zombies! is probably one of the most basic games I’ve ever played, but there is this weird satisfaction that comes from clicking on a zombie and watching the chain reaction that wipes out the entire screen. It brings me back to being a kid, watching my little brother painstakingly set up a huge, complex domino chain, and then running over and tapping one just to see the chaos ensue. There is no real depth here, and you’re just clicking on zombies and watching everything explode. This is the videogame equivalent of bubble wrap, and it might be your intention to just pop a couple and walk away, but by the time you’ve come to your senses you realize eight hours have passed and you’re somehow completely naked except for the layer of bubble wrap armor you’ve encased yourself in. OMG Zombies! is exactly the same way. Completely simple, unassuming, and lacking any sort of depth at all, but blink and you’ve lost several hours of your life and you’re completely naked and encased in bubble wrap.

… You know, I really should find out how that keeps happening to me.

Joseph is irrationally upset, Jeddy struggles with being a strong, independent woman, and Anna finds her newest, truest love.