On the post-10th anniversary of an existing review for Metroid Fusion (wow, there’s really a review on GameCola that’s 10 years old?), I wanted to take it upon myself to offer a proper review of the game, since the existing one by Aaron Waters is a childish display of fandom disappointment that would barely qualify for GameFAQs.

This disappointment COULD be justified, considering the gap between this release and the mega iconic one that preceded it (maybe you’ve heard of it, it was called Super Metroid? I think?). It was inevitable that fan salivation for the next title would start breeding insanity to the hardcore, like a promiscuous bunny with two wombs. Since Nintendo didn’t get to publish a Metroid for the N64, the GBA was the next logical step, still years away. The thing you have to remember about hardcore gamers is that they’re generally sick people who have a particular game series replacing another fetish or psychotic fixation, and eight years without a continuation on that will push them right over the edge.

And as recently crowned TIME LORD for this generation, I, Meteo Xavier, the man the FDSA once classified as Angus prime rib striplets, am here to set things right where they have been wrong by re-writing history.

And possibly this review if I can’t keep the quality consistent within it. 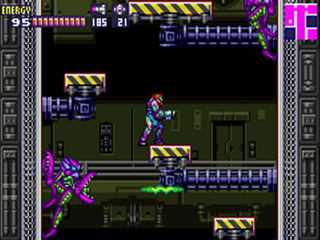 Seriously, what is a structure like this for, anyway? Did the scientists and contractors meet and think, “If we don’t put a really deep, narrow shaft with nothing but platforms to jump to, this space station’ll never pass FHA loan inspections”?

Metroid Fusion, without getting too redundant, is the first motherfucking Metroid game to come out since Super Metroid. Super Metroid is the greatest thing that came out of the early ’90s. President Obama recently inducted it as the first game to be accepted into the Library of Congress for cultural significance. A tough act to follow indeed (which is true, even if the last part is not) and Nintendo was unable to put out a title for the N64—probably for the best. The GBA was next up and they decided to try to follow Super Metroid‘s footsteps. It was well-received but did not please everyone, mostly for one very specific reason which didn’t even change that much of the actual gameplay quality vis-à-vis how much it recaptured the fun of Super Metroid. I will get to that later.

In this game, still currently the latest in the Metroid timeline, Samus has been infected with a crazy, newly-discovered virus called X. X almost totally decimates Samus and actually requires her to be surgically altered INSIDE HER SUIT to save her life. She survives with a newly configured suit (which, truth be told, does pale in comparison to the classic Varia), but while she’s on the operating table, the virus has spread and taken control of a research lab station, and apparently no one else in all the galaxy is more qualified to stop this menace than someone who just got done BARELY SURVIVING HAVING HER ENTIRE BODY SURGICALLY ALTERED.

The Federation in Samus’ part of the universe really needs to get their shit together. Why does she even work for them, anyway?

And so, off you go to the space station, each room conveniently of a different ecosystem that gives the game its excuse for fire levels and water levels and plant levels and re-acquiring all your old stuff. They’ve added a couple major gameplay changes this time, in that you need to report to a computer artificial intelligence for new guidelines and actions, and you have the Metroid equivalent of Nemesis chasing after you every so often. Both are nicely executed twists that add more to the Super Metroid template that serves as the base here.

If it weren’t two fucking o’clock in the morning as I write this review, I’d post a penis joke here so hardcore, your face would explode and your widow would screw every Dollar General manager in the tri-state area just to get enough money to afford the premiums your funeral home would have to charge just to handle and prep your remains to be returned back to the Earth.

So why does this game polarize Metroid fans? Well, because the part where you answer to a virtual commander through the computer systems adds a layer of something way too many players make a much bigger fuss about than should be allowed in civilized society: it’s called “linearity”, and it’s what separates games that can reasonably be expected to be played and games that make you wander in the dark with slightly more satisfaction than a blind leper about to give birth. In Metroid Fusion, you technically get a little less room to breathe, from the rather claustrophobic feel of the game’s environments to further impositions on when you can go where. My best guess is that this proves my theory that gamers are basically pickled eggs with pickled testicles, as neither can wait eight years and be expected to be healthy to others.

The thing Metroid fans—and you yourself, if you happen to be one of these troglodytes slandering a good game without a good reason—need to remember is that “non-linearity” is NOT the point of Metroid. Never has been. You’ve ALWAYS been limited as to where you can go when for a variety of reasons, it’s only in this game did those reasons get a more obvious frame.

The real selling point of Metroid is EXPLORATION, and that’s not the same thing as being linear or non-linear. The fun has always been in the challenge of getting your ass kicked by a boss, only to try to go back and find VERY well-hidden power-ups in walls and secret passageways you almost need a strategy guide to find.

And THAT part of Metroid, ladies and gentlemen, this game captures with all the genuine quality of its more famous forerunner. I can most definitely confirm that this title is worthy of the Metroid name: It’s fun, it’s challenging (just barely escaping being too much so), and you bet your unwashed lederhosen that you somehow accidentally ate for dinner that it makes perfect use of its exploration aspect. It throws you on several loops and masterfully changes up the gameplay dynamics without changing up the gameplay. 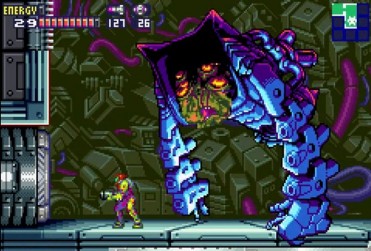 This is not the picture I wanted to use to introduce you innocent, childlike GameCola readers to the concept of a “wet nightmare”, but if this was to be my fate, it means it was yours too. You didn’t really deserve to fantasize about sex without terminal nausea anyway.

The graphics aren’t as…fulfilling as the Super Nintendo forerunner, but they’re excellent on their own accord. Control is pretty tight as well. Only thing I wish it would’ve improved on was the music. 12-bit or whatever GBA music is and ambiance do not work together.

Not sure what else I can add. This game should be in everyone’s library; it takes the best, meaty, undiluted part of Super Metroid and adds new twists that reinvigorate the series (if only for this one game) while not taking anything away from the others. Don’t let baseless disappointments from 10 years ago prevent you from enjoying quality today; play this game right now or I’ll personally drill another hole in your head so I can…

[Editor’s Note: While we give Meteo a lot more leeway for his rampant online sexual violence, how this ends is too much even for the same internet that has Gelbooru, MorbidReality, and Fox News, and GameCola itself would be raided by horny UN Crisis Response Teams if I allowed it to be published. The only reason he hasn’t been fired for actually trying to post it on this website is because I’m sleeping with him and he’s definitely the dominant one of this hypersexual relationship. Power top, power bottom, he’s got so much power that he shakes the entire house and some of our neighboring ones, but I can’t leave him because I love how much pain my body’s in afterwards.]

Mega or not, here we come!