When I was a kid, one of my dreams was to be a fashion designer. I was maybe nine at the time I decided this, so ten years later I have come to realize I know absolutely NOTHING about fashion. What people choose to wear and what trends are confuse me. I’ve since realized that dream was a bust, but I have not stopped playing my fashion design games, of which there are a good few. Imagine: Fashion Designer was one of the first games I had asked for once I got my DS. The concept of being able to design clothing on the go seemed like a lot of fun, especially since Nintendogs, my only other game, was getting a little old.

The game starts with tutorials that tell you how to do everything from picking a model to using the catwalk. There’s no story in this game, unlike Imagine: Fashion Designer New York and Imagine: Fashion Designer World Tour. The only objective is to take jobs until you win. After that you’re free to do whatever you want, designing whatever clothes you want without having to make them the way others tell you. That was always my favorite part, seeing that this was what I really wanted to do. It’s a pretty simple game and took me maybe an hour and a half to complete the main jobs in my last play through of it.

While the game isn’t terrible, it’s not that great either. The graphics are my main problem. The 3D models are very ugly and just…bad. They’re really bad. It was a time when they really wanted to use 3D and it just did not work. 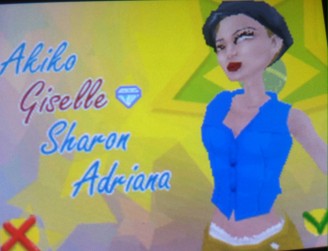 Her lack of eyes is a bit scary.

The jobs that they give you are somewhat hard towards the end. In one they ask for an African American model. OK, done. Next they ask for  the backdrop to have someone thing to do with Africa. Easy enough. Then they ask for African hairstyles. It took me a long time when I first got this game to figure out what that meant. I’m sorry, I do not know what you want; please label the hairstyles. Usually when you fail a job, it will tell you what to fix, but this one just said “wrong hairstyle”. Helpful, right? Otherwise, most of the other job instructions are easy to follow, and the ending notes help you realize what you did wrong. 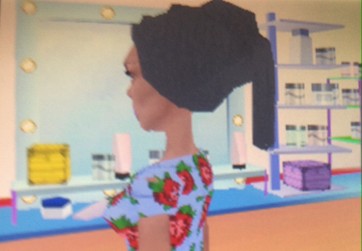 Labeling these hairstyles by nationality would have helped a lot.

I do like the fact that you get some freedom in regards to the color choices. The later games have a set palette for you, but this has sliders that let you pick a color and shade. This applies to the color of the model’s eyes, lips, and the clothing. For some reason I just like that better than the set palette. 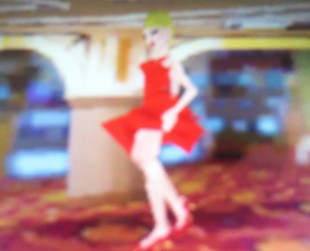 You may not be able to see, but the skirt physics are great. The skirt goes up when the model moves.

This was only the second in the Imagine series of games, and the first with 3D graphics. I can’t say that they did a terrible job, but the jobs were a bit boring and tedious at times. Afterwards, it was pretty fun—getting to make my own creations and making up model to how I wanted. Also, the accessories are all already there for you, no purchase necessary (when games make you buy accessories I get a little frugal with any money I’m given).

I guess this is just a huge reminder of how much fun I had trying to design clothes when I was a kid. Now that I’m older, I’m more critical of the way the game looks and how fun it is. Unfortunately, it’s not as fun or amazing as I remember. 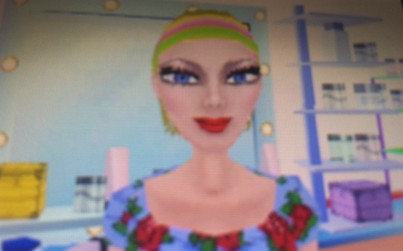 In conclusion, this is the makeup I came up with.

Finally, a game that non-gamers can play together with their gamer friends.