The GameCola Faithful may recall that I mentioned this game on a previous edition of “Scratching the Itch.io“. You may also recall that I had certain misgivings about the price of episodic games. Let me start the review off by saying that the game is well worth the $5 asking price, and that I’m glad I gave it a shot.

Comments contained in this image do not represent the feelings of GameCola or the reviewer.

Catmouth Island is a classic point-and-click adventure game at heart. There’s a goofy plot, there are items scattered about the world for you to pick up, there are comical characters to talk to, and there is—of course—a lot of pointing and clicking. Depending on your adventure game history, there may seem to be a lack of item combining or non-dialog-based puzzles, but I feel like the game is perfectly enjoyable just sending you off to do things like pick up a three-ton water pump and bring it to a guy who will teach you how to do a hand stand. Is that a spoiler? That might be a spoiler.

The early-2000s style graphics really have some charm. I liked wandering around and just looking at the different houses, or climbing up the mountain and talking to the motivation master and just taking in the scenery and music. The developers did a good job at building a consistent feel for the game, with nice ambient effects and catchy music that suits the different parts of the island. The game also sneaks in a number of references to games and, uh, let’s call it “Japanese culture”, which I personally enjoyed.

Like most point-and-click adventure games, this one isn’t for everyone. While I enjoyed the game myself, some people might find “wander around an island, talking to locals and performing various tasks” to be a bit boring. It’s not entirely obvious what you’re supposed to be doing, sometimes, especially if you’re not as interested in I was in talking to everyone. Most of the entertainment is conveyed through dialog, and I realized after beating the game that I probably could have gotten away with a lot less talking. Maybe only sit down with this game if you have the time to relax and enjoy it—although, the game regularly autosaves in case you do have to leave suddenly.

The only troubles I had with the game are the camera and one specific dialog-based puzzle. The camera is a bit slow to move, and you can only spin the camera around the character—no changing the angle up or down. When you’re trying to navigate the island or sneak between buildings, it can be difficult to see where you’re going at times. It didn’t really ruin the game, but it was a little bit of an annoyance now and then. The one dialog-based puzzle just had you picking through nonsense options…and, you’d get sent back to the beginning if you picked the wrong choice at any time. You had to memorize which option to pick for each question, and while the story told through it was kind of silly, it got old pretty quickly. 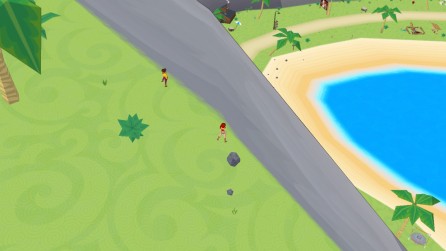 I clicked the upper right corner, and Mya ran all the way down there, occasionally pausing to catch her breath.

But, again, that was one puzzle out of a few hours of enjoyable gameplay. Actually, I really look forward to the next game in the series. As you wander around and talk to people, it becomes pretty clear that there are some curious things happening on the island. What is B3 Corp up to? What are the mysterious cat face statues? What happened to the world, and what’s going on with the island’s inhabitants? Your guess is as good as mine! This is “Episode 1” for a reason. The developers did a great job at giving you enough clues to get you interested, only to leave you wondering what will happen. The answer is obviously “I will be $5 poorer in a few months”, but that doesn’t help with any of the in-game questions.

You can currently buy the current episode on itch.io, and you can also vote to get the game on Greenlight. I have a feeling the staff and fans of GameCola will enjoy this one!