Welcome to your new summer job at Freddy Fazbear’s Pizza! This restaurant is popular with kids for their birthday party specials, gaming arcade, and—of course—Freddy Fazbear and his two friends Bonnie the Bunny and Chica the Duck! They’re animatronic characters that sing songs to entertain the children, and boy do the kids love them! Freddy Fazbear’s Pizza is certainly a wonderful place during the day. But, you’re not here during the day—you’re the night watchman here to make sure the restaurant is okay during the night. However, on your first night it’s, revealed that you’re not there to protect the restaurant against intruders. You’re there to monitor the residents imprisoned within. 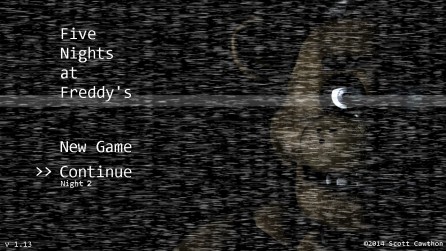 Five Nights at Freddy’s is a game out of a particularly prehistoric genre: It’s a modern-day FMV game. In the vein of classics of the genre, like Night Trap and Double Switch, you watch multiple camera feeds hoping to get a handle on the movement of the game’s monsters. Unlike those games (and, in fact, most games of any genre), you have no way to actually fight these monsters off and may only take defensive actions. Your defensive actions, however, can’t be on all the time because the restaurant apparently isn’t connected to the power grid at night. If you keep lights and your defense doors on you’ll run out of power and be defenseless, so you have to carefully time when you lower your doors, view the cameras, and turn the lights on. If power goes out, it’s game over. 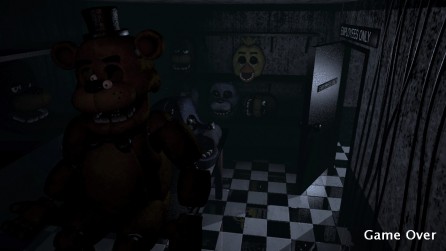 When you can’t bear it anymore.

The game’s controls and mechanics are simple. Look around the restaurant with the cameras to find where the suits are. The animatronics don’t move if you watch them; however, sometimes the cameras go blank for short periods and then the animatronics are gone. You can click the controls for your shutters and lights, and really that’s about it. You click through the night, watching the movements of the animatronics and following their course. There’s three animatronics that wander on their own, with a fourth that has unique conditions to making it walk around and try to kill you. Through all of this, you have to balance the power you consume, because it’s game over if you run out of power. The main game is watching your enemy and resource management. It’s a simple but effective way to achieve an atmosphere of horror. 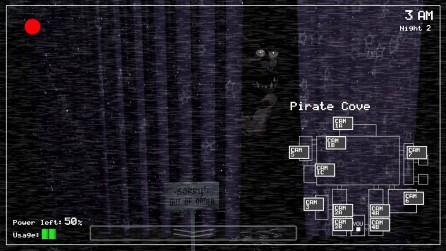 The game’s rather lacking in narrative, being primarily a jump scare-based game. You’re given a brief narration at the start of each night from the previous security guard and then you’re left to look for clues about the story. I’m pretty certain you can go the whole game without ever finding anything out about the background in fact. The most ominous thing is the “out of order” animatronic, Foxy Fox (pictured above nervously peeking out of the curtains in Pirate Cove.) Otherwise, the story is more in how you’re playing the game and how close you come to finishing each night before Freddy & Friends get you, as well as their hunting patterns. The story is very much a case of “show, don’t tell”. 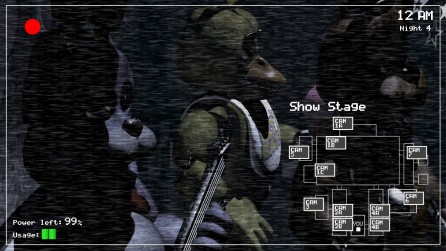 The gang’s all here!

Now, truly…is the game scary? If you’re afraid of animatronics, the dark, jump scares, or mascots, it certainly will be! The game also cultivates a feeling of helplessness and distress via the power mechanic. There’s also a touch of unreality as you’ll start experiencing hallucinations and the monsters will appear to distort and move without actually moving. Couple that with creepy ambient sound, and little in the way of music and it might be enough to horrify you. Perhaps the worst of all is that you’re doing this for only four dollars an hour! The game certainly has its share of creepy elements to it, and it has attracted a large following of people frightened of the game. 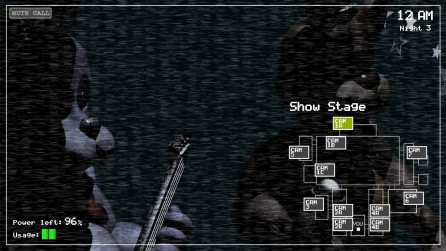 The game, however, has its share of flaws. The passivity, while working in its favor, also limits the game and can make each successive night more and more of a drag. The game also features some bugs such as one where you can’t pull up or put down the security cameras and are forced to watch your power drain. And, the monsters’ attacks work under very specific circumstances, and there’s a way to glitch them so that only two of them can attack you. Perhaps the biggest flaw is that, at its core, the game relies upon jump scares and a fear of animatronics or mascot suits to scare you. Flaws such as these should be considered when considering purchasing the game. 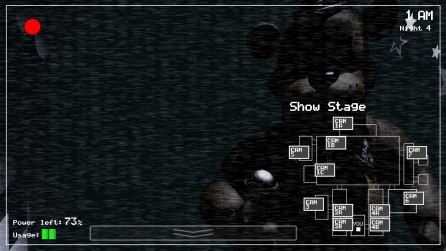 After all of this, would I recommend you buy it? Only if you think you’d get the most out of it. However, it is only five dollars on Desura—and, that includes a Steam Key! So, it won’t cost a lot to give it a shot, and the price is what really influenced me to make the purchase. It’s not a disappointing game by any means, and is worth a shot.

Doctors hate him! Find out how a researcher improved vision with one weird trick.