When you glance at the classic gaming world, it seems like a lot of games originate from Japan. It’s very seldom that you see a game that is made here in the USA. Taking this into account, a vast majority of these games are relatively normal. That is, you see little relation to Japan in the games. However, there is one game that screams Japan at the top of its Super Nintendo lungs—and, that game is none other than Kendo Rage.

Kendo Rage is an action game developed by Datam Polystar and published in English by Seta USA. The game follows a protagonist who is sent on a mission to fight crime using her kendo skills. Here is where the beauty shows between the Japanese version and the English version. In the Japanese version, the protagonist (Mai Tsurugino) is tasked to fight monsters at the request of the spirit detective, Doro. In the English version, not only do the names change, but a slight change in motivation changes also. The English version features the protagonist Josephine (must be addressed as “Jo”), an American student attending a summer kendo school in Japan, who is asked to fight monsters on her way to school by her trainer, Osaki “Bob” Yoritomo. Now, this may seem rather odd to begin with, but I assure you, the game gets better.

Just take a look at the screenshot to your left, and the gears already start turning. What could possibly be so wrong with a Super Nintendo game about kendo and anger? First off, let’s take a look at the ghost there. I mean, honestly, look at it. It’s so adorable! How could you whack that with a kendo stick and not feel guilty? Oh yeah, that’s right—it’s dead already. It shouldn’t feel pain at all, but for some reason when you hit it, it shows a face of pain and anguish. Nice going, jerk.

Turning your attention now to the top left corner, you’ll see something that you don’t see much in games anymore: A clock. It’s duly noted that this game also sports an anime adaptation, and that’s exactly where the clock comes in. In Japan, these clocks are displayed on TV channels that show anime. This ensures that kids watching anime could keep track of time and not be late to class. The only thing more convenient about that is the fact that they were kind enough to leave it in the game for you. At least you won’t be late to school. 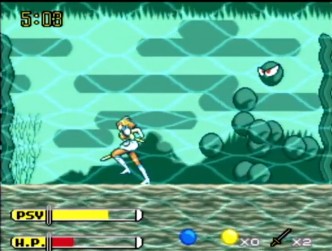 I figured I’d try and save the best for last, and how can you possibly best this? Let’s move on to the bosses. Take a look at the screenshot there on the right. This is just a mini boss for Level 3, which happens to a pond. The boss’ overall design is simple, just like every other boss in this game. Throughout the game, you fight all sorts of crazy bosses, from imposter Jos all the way to cannibal fish. The only thing that could make this game slightly tolerable is if the boss fights were diffi…what’s that you say, there? Boss fights are over in five seconds? THAT IT’S, I’M DONE!!

Overall, I can’t help but award the game some credit. Most games on the Super Nintendo tried to follow a common setup. Kendo Rage took all that and threw it all down the drain. I mean, honestly, when was the last time you ever played a game that was so heavily influenced by Japanese culture? In those regards, I can’t help but vent some kendo rage for a few and give the game some well-earned props. So, in conclusion, if you enjoy crazy games and love Japan, I implore you to grab your kendo stick and try out this zany Super Nintendo game!

As a side note, if you do have any questions or concerns about this game, please make sure to leave them in the comments below. I don’t want to spoil it or anything, but I’ll be doing an episode of “My Little Game Review” for this ga…dang it, not again!

Well, it’s official: after ten months of planning, organizing, coordinating, arranging, rearranging, and generally unleashing my Bridezilla Fury upon the world, I have finally attained the status of ...