Bubble Bobble is not a great game by any means. It’s simple, repetitive, and truly harkens back to a nearly-forgotten era of arcade gaming—an era ruled by quarters and high scores. So, why then did Bubble Bobble 2 never see an arcade release? It seems like it would have done quite well. Sadly that answer is lost to history, and by that I mean I can’t be bothered to look it up right now. What’s important, however, is that Bubble Bobble 2 had two separate console releases: one on the Famicom/NES, and another on the Game Boy. I will be covering the NES version today, and the Game Boy at a later date. So, stay tuned for that.

It took about fifty minutes of actual play time (reloads included) across three sessions to clear all eighty boards. The game calls them “Rounds”, but I prefer archaic terminology, especially for this style of play. I’d also like to note that I played on an emulator, because I don’t have $200 to spend on a 21-year-old game. We aren’t even dating so it’s totally out of the question. Now that we have the salad out of the way, it’s time for the main course.

Immediately we see that it’s a vast difference from the first Bubble Bobble. There’s a background, and it looks good! The ground is clearly wood with perhaps floating branches for whatever reason, and hover shrubs. I see some Greco-Roman architecture; those appear to be floating Corinthian columns in the sky behind those air branches—this is exciting! Also, some familiar enemies. Those wind-up mouse-like robots and purple things from the first game. 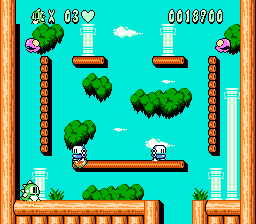 The 2nd Board from Bubble Bobble 2

Okay, so I guess every board is going to look like a Greek fever dream. Where does that hole go? Bubble Bobble had a ceiling so you could sort of tell that you were going to fall through in a loop, but that just looks like death. At least we have a few new enemies coming up—a spring wearing a top hat with a spike on top, cute! And pointy! They actually throw their hat up at you if you jump or walk over them, but they have no side to side movement. 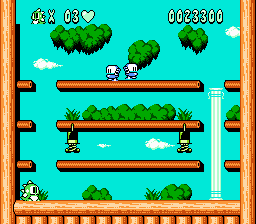 The 3rd board from Bubble Bobble 2

Is that a giant wind-up guy? A boss in Bubble Bobble and it’s only the tenth board! This is fantastic! The music still hasn’t changed, so maybe he’s not really a boss, it’s just a mini-boss or just a huge enemy that you fight on a regular basis. At any rate, he serves as a good mid-point for this area; the background even turns a sickly orange on the next board indicating a setting sun. 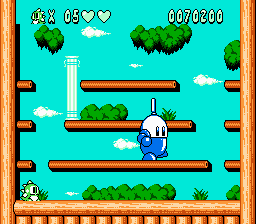 The 10th Board from Bubble Bobble 2

The level design up until the 20th board is laid out quite well. We have easy boards which are clearly designed to make sure you know the mechanics, like bouncing on top of bubbles, charging your shots, or even holding bubbles in until they make you float. Yes, you can float in this game. No more getting stuck in a single space with no way to get out but death by red-eyed floating skull. Although, to be honest, the floating mechanic is infuriatingly slow, requiring a good four-second charge before you finally start to hover, leaving you defenseless for far too long.

You may have also noticed that there’s a second heart next to my life counter. That’s a shield more than anything. That is, if you get hit you won’t lose a life, but that heart won’t come back no matter how much fruit or ice-cream you eat. If you manage to collect another heart however, well, that’s another free hit.

At any rate, it’s the 20th board and this is happening right now; I’m fighting a tank in some kind of dungeon! That’s a huge leap, from cheerful sunset to grim castle. 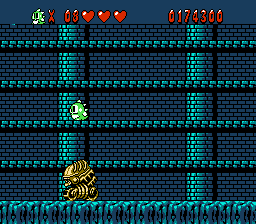 The 20th Board from Bubble Bobble 2

He falls pretty quickly if you can figure out how to hit him. The charge shot helps with that. After the fight, you’re forced into this bright, circus-like minigame where you play 1-on-1 volleyball against a…clown? It’s bizarre and I hate it. I mostly just let the timer run out because it’s pretty much impossible, but if you win you get…points. Yay. I actually went through a bonus door on the 12th board which led to the same game. It’s 100,000 points when you win, but who cares about points any more. 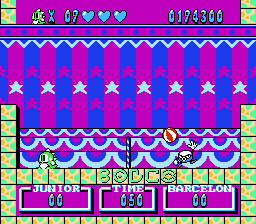 The Bonus Board from Bubble Bobble 2

Wait, who’s Junior? Am I Junior? I thought it was Bob or something. Maybe it’s Bob Junior, that makes sense right? Also, I appear to be playing against most of Barcelona. The “A” couldn’t make it to the game, I guess. Anyways, when that’s over, we collect the points and go back to the forest of floating columns. 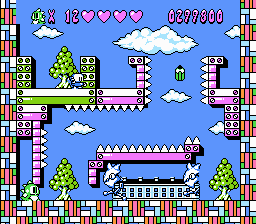 The 22nd Board from Bubble Bobble 2

Wait. That’s not a forest. Is that supposed to be stained glass? There’s new music here, too! New enemies and a floating pencil for points, because pencils are pointy. You clever, clever girl.

So, those creepy skeleton-like things are a type of enemy that’s new to the “series” at this point. They take a few seconds of bubble spam before they just up and die. I guess Junior has gross acid spit or something. These kinds of large enemies are a recurring theme and they all have different patterns: There’s a sentient ball of fire that waves its arms and sparks at you, there’s these guys who snap if you get too close, there’s a helicopter that drops minions on you, and a freaking AT-ST as the early ’90s were a time to blatantly rip off Star Wars in as many ways as possible. (It still happens now and then, but the generic laser sword is something of a staple in sci-fi, now.) 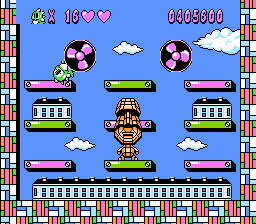 The 30th Board from Bubble Bobble 2

Now, this is where the game really takes a downward pitch. They’ve introduced these awkward wheels that essentially freeze you in place as you rotate around them, and when you try to jump, you get shot across the room based on which side you’re standing on. When suddenly it’s miniboss time again and you’re trying to destroy a priceless Moai that both shoots at you and flies at you. It’s an unprecedented difficulty spike, but it’s still plenty fair. Let’s keep on, shall we? 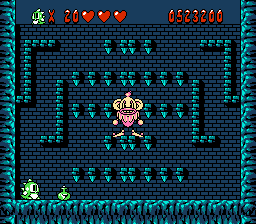 The 40th Board from Bubble Bobble 2

The second boss is terrible. This monkey just sort of stands there while you wail on him with tornadoes. When he jumps, the platforms are supposed to drop but he jumps so infrequently that it’s a moot point. I guess if there was another sort of health system implemented it would have made more sense for this kind of boss to exist. In this particular case though, it just doesn’t work. Have him throw bananas or something, but he’s just not threatening as it stands.

And then we land on board 45. Maybe the single worst-designed level that I’ve ever experienced…or maybe the best, I don’t even know anymore. It was just SO frustrating that it makes me dread playing the game ever again. There’s a helicopter enemy—I’ve mentioned him already, but this is his first appearance—who flies across the screen once every five seconds and drops a load of smaller enemies. This alone isn’t so bad, but the sudden-death timer is short, about three seconds. Now, for those uninitiated, what I mean by “sudden-death timer” is this: When you stay on a level for too long, a ghost appears to hunt you down. Its movement is predictable, so it’s easy to avoid providing that you can actually get out of the way. Just look at this uncaring smile. This callous grin. He vomits in your soul and churns the remains with your spine. 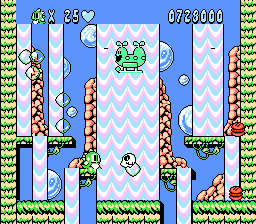 The Damn 45th Board from Bubble Bobble 2

After having a .45 stuck down my throat, the rest of this seems like a game. Oh wait, was this intended to be a game? I guess that means it’s fun? Well let’s skip ahead to the boss. A…bird…wearing…sneakers? Honestly, this fight went by so quickly I barely even recall how it happened. 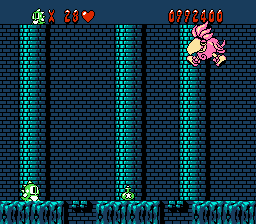 The 60th Board from Bubble Bobble 2

After this we’re taken to the final set of boards and they are hellish. The difficulty is sort of mundane and the enemies are mostly familiar, though there are a few powered-up versions of things as per standard of the art. Best of all, there’s some semblance of a narrative being told, and an actual ending instead of a black screen telling you that your hard work was worthless and that you have no friends. Either way, a shameless attempt at telling you to fire more quarters into the cabinet’s hungry slot. 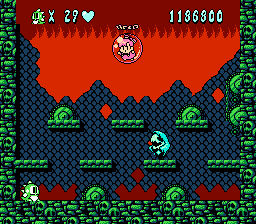 The 70th Board from Bubble Bobble 2

I’m going to be completely honest here. When I started, I assumed that there would be 100 floors just like the first game—but, then I hit board 70 and when I saw that princess and the obviously final-boss-looking guy, I was very disappointed. The fight is rather easy for this stage in the game, but he still takes some doing. Afterward, the bubble pops and the game is over. You Win. There is no more game at all. Not even 10 short boards leading up to an ultimate showdown that proves that this is only a dramatic lead-in…or is it?

Want to find out more? Watch my streams on Twitch and follow me on Twitter, or simply play it through for yourself and call me a talentless hack. Either way, I look forward to your feedback. 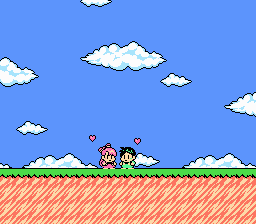