As I dive more and more into the Sega Genesis library I barely ever got to touch, even decades after I discovered emulation, I’m surprised at a lot of the stuff I find in it. While I grew up during the first famous console war between Nintendo’s SNES and Sega’s Genesis (I was a Nintendo boy through and through) and knew a lot about the games that came out only for the Genesis, I’m still just about confounded by the titles I find I never knew about. Even with the games that both systems shared, the gaming experience is almost as different as night and day.

On the flipside, I sometimes wonder if Sega diehards ever lamented not having a Legend of Zelda game to call their own. There were some that came kinda close, like that Crusader of Centy or whatever, but I’d say the closest the Sega-only crowd (if any of them are still alive and haven’t been snuffed out for being the most obsolete humans known to modern science) get to a Genesis Legend of Zelda experience is Beyond Oasis.

I had heard of this game long before, but it had only been in recent years that I finally played it (it was the first download I got from the Nintendo store on the Wii). And, for the first few times I’d gone through the game, I wasn’t quite sure what to make of it. Sega’s answer to Zelda this may be, but it’s still night and day when compared to the SNES stalwart. Truth be told, this game plays more like a top-down quasi-Egyptian/medieval Streets of Rage. The story is completely different, the action couldn’t be more different if it tried, the progression of event to event is something Zelda really should have, the item and gimmick system, music stylings, etc., etc.—nothing like Zelda at all, and yet for some reason I get a feeling these are indeed distant cousins of some kind. 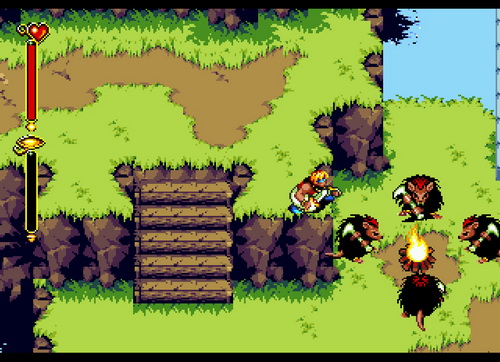 The story revolves around good-hearted adventurer Prince Ali finding a golden armlet whilst spelunking. He comes home and finds soldiers, ogres, and these little rat-fuckers wielding bones attacking the city and kingdom. With nothing more than a knife and Chun-Li-style kick, the barely-armed prince is somehow able to beat the heavily armed and armored soldiers as well as ogres twice his size. He gets tasked with releasing the nearby water spirit, does so, and the plot begins to unfold as Ali journeys to find all the spirits, defeat this dark army, and find out who this shadow wearing a silver armlet is.

Like Zelda, the story isn’t quite that important, nor does it really play into the foreground—it’s just an excuse for gameplay. Also like Zelda, your journey consists of crawling through dungeons, solving puzzles with the items (spirits) you acquire, beating huge bosses, and then moving on to the next spot on your map you are destined to go. You get bombs, bows and arrows, new swords to play with, keys…this is where the similarity takes hold.

Where it differs is the structure of the game. Beyond Oasis relies much less on swordplay and using all the weapons you acquire, and instead makes you use a beat-em-up style combo system to do damage. It’s pretty creative, but it takes some getting used to, particularly as what you’re able to pull off depends largely on how quickly and sensitively you mash buttons. Holding one down allows Ali to crouch and slash at the shortest of enemies he can’t reach. Pressing that same button quickly allows him to jump. Pressing another button while he jumps lets him do a flying kick. Holding the attack button lets him sort of “charge” up a circular attack, or you can do that same attack rotating the D-pad in a full circle. Pressing the attack button quickly makes him start doing a really awkward-looking rapid kick that really does some damage when it connects (not sure how this does more damage to a heavily-armored goon than a sword or bomb, but whatever). There’s also this one weird move he does occasionally that’s REALLY helpful and involves him jumping forward with a BACKflip, and somehow slamming all the enemies around him with one upward swipe. I haven’t figured out how exactly I do this, but it’s effective. 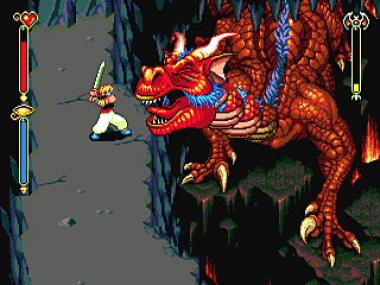 Then you have the spirit magic, where your golden armlet let’s you summon elemental servants to help in combat. At first, these are pretty straightforward stock deities (the water fairy who heals and blows bubbles; the muscled fire god who breathes flames, punches things, and explodes fire everywhere) and then they start getting interesting (the shadow deity that literally serves as your shadow double and takes damage from you, and the Venus flytrap whatever-it-is). As the game goes on and the dungeons predictably get more complicated, you are required to switch these spirits out constantly to trip traps and open doors. You don’t get to do this on the fly, though, and spirits consume MP, so you have to constantly find the elements these spirits are associated with, shoot some energy from your armlet to call them, and then trudge all the way back to where they’re needed.

At first, I found myself really surprised and somewhat enamored with Beyond Oasis for just how many of my expectations were shattered as I played it. I really thought I was getting more of a glorified Zelda clone, but this game is anything but. It feels like there’s a level of depth to it in just the gameplay alone, even if it doesn’t actually appear in the game itself. I really liked that the structure of the game wasn’t just collecting shit; Prince Ali sometimes has to do dungeon-like environments that aren’t specifically related to his next plot coupon. At one point, he has to steal away on a ship and conquer the enemies for its use, just as an example. The progression deviates occasionally, especially in the middle, where it feels like a proper plot progression in an RPG (or the beat-em-up genre I mentioned earlier), and it does make the game stand out. The music is done by chiptune wizard Yuzo Koshiro (there’s that Streets of Rage element again) who somehow makes an unmemorable soundtrack memorable for the unique compositions and atmosphere he’s able to generate from the limited Sega Genesis soundchip. How he got FM synthesis to sound even vaguely orchestral is a question that hurts my head to consider.

But by the next couple times I’d played through, the novelty wore off a bit and I felt like I was playing this game more for what it is—a slightly janky and awkward experiment in genre-melding that produces a unique and fun game, but one that probably could’ve used more polish. The first time I played through, it seemed like it took about forever to complete, but the third time I got 2/3rds of it done in one sitting. I attribute at least some of that to the almost useless map the game gives you, and some of the rest to FINALLY figuring out how the overly obscure puzzle system of the dungeons works. A lot of times, this game leaves you scratching your head where maybe at least a bit of in-game tutorial might’ve been useful. The item and weapon system REALLY could’ve used more work, as I found it difficult trying to manage and save up the increasingly rare health and magic restoring items and forgetting I even had other weapons to choose from (half of which are basically useless in combat). The spirits are often as big a pain as they are a help (except for the Shadow one who is almost broken in just how awesome he really is) and they drain too much energy for my liking. You get little hearts and gems throughout the game as well, but I haven’t found them to have a noticeable impact on Beyond Oasis‘ somewhat high and frustrating level of difficulty. 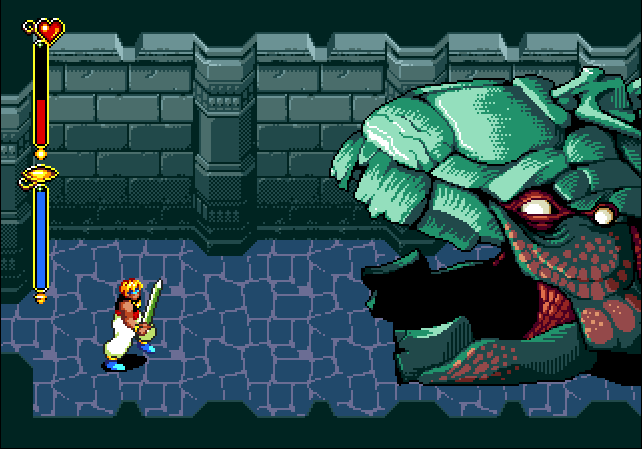 And the bosses, gorgeous as they are, are the worst part of the game. Even playing on an emulator with save states, it’s frustrating. Good challenge and creativity, but man could that have been toned down.

Ultimately, I don’t think Nintendo owners would’ve gotten the better deal to get this game versus Zelda. It’s a worthy game to have in one’s collection, but far from Zelda‘s general appeal and ease of play. It’s an acquired taste that ain’t for everyone. Pick it up if you find it cheap or try a ROM of it to see if you like it, but I wouldn’t go further than that to start with. There’s a reason Sega and its fans never marketed Beyond Oasis as a Zelda killer, and the game itself is proof of that.

I wish my couch could fly. I mean, think about it. You're on your couch, chillin' out with your buddies, but suddenly you run out of beer. You can't just sit around and play your movie trivia game sob