To say my Autumn’s been a trip barely does the sentence justice. My October kicked ass—but I did not get my Halloween, the season I cherish most of all. I also found my gaming habits changing in vast new ways. After several months of being on new medication, I found myself craving something in this field but didn’t know what. It started to be pinpointed with Sega Saturn import games (of which I will review in time), but that soon moved into a genre of gaming I almost swore I’d never get into. 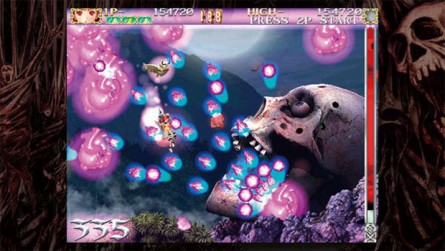 I never got this genre. Watch someone from Japan on YouTube play one of these and you almost shed tears for all the life they’ve wasted mastering such a fun but useless art just to post it online. You pretty much need to be a born otaku and weeaboo to enjoy this genre.

Which, unfortunately, fit me to a tee, and after 30 years of avoiding it, I could no longer. As I write, I’m hooked—and Deathsmiles is where I start.

This wasn’t going to be my first review in some months, I HAD a Splatterhouse/Splatterhouse 2 review that was written and now lost to the anus of history. I hate rewriting shit, so I decided to start here and give that time to refurbish. Thankfully, and I didn’t know this until I got the game, but Deathsmiles actually takes place on Halloween, so I did at least get a shot of my favorite season while playing it.

If you’re on an indie gaming website interested enough to be reading a review such as this, then you already know the state of the bullet genre; I won’t get into it. The current trend seems to have been dead set on moving away from loner aircraft fighting across worlds and space to games where boner-inducing witches fly through enemies that can only attack with brightly-colored geometric lights, and Deathsmiles is probably the Ur Example of it that you can find on a console. Everything about this game is designed to stop at nothing to get the niche weeaboo gamer stereotype to break out their Kill La Kill wallets and drop money for it as fast as possible. And just to guarantee sales, they made the characters underage. Ick.

That said, the truth of the matter is that it’s impossibly easy to see WHY this genre builds a following like it does, as well as why this particular game was released stateside and built a cult of its own. It’s designed by CAVE, and they pretty much own the genre (if one were to not count Touhou magnate ZUN, anyway). The thing about bullet hell games is that they’re actually easier than they look, but they still provide a hell of a challenge as it goes on. Like most games of the genre, Deathsmiles only gives you a small, visible hitbox that is the real thing you don’t want to get hit. You shoot waves and waves and waves of magic, blowing up thousands of enemies at a time for a huge score and point-inducing currency that you automatically absorb for higher points. You choose from a selection of characters, each with their own style/pattern of shooting, and you get three lives before you Game Over and lose the points you’ve earned. There is also a life point system instead of just traditionally having lives to burn through. Hitting enemies and some other attacks only take half a point away and you can also alter the game so that you can withstand several hits at a time before losing (though you won’t get to claim any Xbox Achievements that way). 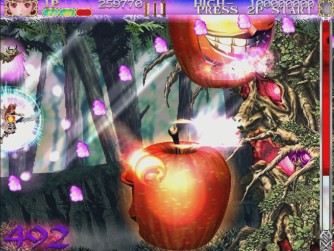 After making sure the basics are taken care of, Deathsmiles then marches on to carve its own individuality with a number of SHMUP gimmicks. First, after your starting level, you get to determine much of your own path from there by getting to select many levels as you please. Second, each level, interestingly enough, has it’s own individual difficulty setting on it. The first time I played this game, it locked out certain difficulties as I played through it, but later it gave me complete access, which I hadn’t figured out yet. Third, not necessarily a new idea, but you get to shoot from the left AND the right, and switching between them is key to surviving in this game. Fourth, there is basically DOUBLE the amount of stages in this game than most SHMUPs have (which still only amounts to nine or so).

I won’t go into the scoring mechanics of the game, because there are a LOT. You’d be better off looking them up elsewhere or discovering them as you play.

If you’re like me and still wondering what the appeal for this game is, considering you could just blindly keep firing at everything and using your unlimited continues to get through the game, I point you to the following:

1. This game is straight up fucking gorgeous from start to finish.

2. There are SIX, count’em, SIX different modes included in this game:

On other CAVE games, this stuff is usually paid DLC—the American version got it all in one package.

3. The difficulty IS toned down from other games like this.

4. Collecting huge scores has NEVER been this addicting. Seriously, I really didn’t think just having a high score was a good enough reason to even play a game anymore, but this game proved me wrong.

5. The quasi-lolicon stuff really isn’t as bad as other reviewers have made it out to be. If it was really icky stuff, it wouldn’t have ever gotten released here in the first place.

6. It’s the best kind of game—simple to pick up, almost impossible to master. For someone like me that only seems to get 30 minutes worth of game time a day these days, 30 minutes here goes a long way. 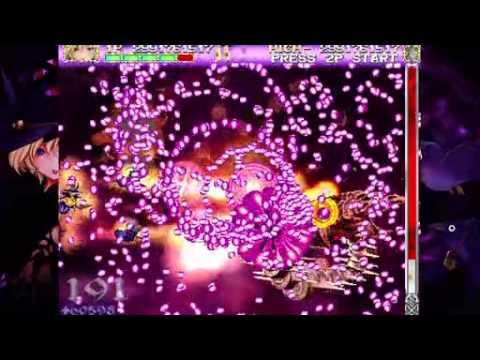 Best of all, what makes this game fun is that it’s extremely rewarding even when it’s punishing. That’s sort of a trademark for the CAVE games I’ve been playing, but this one seems geared even more to a rosy player experience instead of giving the hardcore something to conquer. Make no mistake though, on the Mega Black Label Level 999 difficulty, you won’t get past the first stage without continuing, but until then it offers so much in such a short span of time that it’s impossible to not feel like you got your fix in less than half an hour, and wanting to keep trying all the same. If you’re waiting for your wife to get ready for something, this is the best way to spend that time.

Yep, I’ve fallen for CAVE now. This game really kicks ass and has me sucked in. Deathsmiles is gorgeous, meticulously designed, highly addictive, and has lots of versatility from the six game modes included. It’s not for everyone, but for anyone who even has a hint of interest in the retro gaming scene definitely needs to have this game and get past the creepy-looking cover on the front. It’s good stuff, trust me.

In some of my next reviews, I’ll be doing other CAVE games for the Xbox 360. You’ll want to start saving up now to get them, though—they ain’t as a cheap as other pre-owned Xbox 360 games these days!