Isaac and his mother lived in a house on top of a hill. Isaac was a fanciful young boy who busied himself with toys, drawing, and playing pretend. His mother was a devout woman who spent her days watching Christian broadcasting and pondering the word of God. That is, until one day when Isaac’s mother was rewarded with the voice of God, telling her to save Isaac by first removing from him his worldly possessions, and then sequestering him to his room until he becomes purified. However, none of this pleased God and He came to Isaac’s mother one last time, ordering her to kill her son. “Yes, Lord, I will do as you ask and murder my son,” she said as she grabbed a butcher knife and walked toward Isaac’s room. Isaac panicked and searched for a way out, finally finding a door to the basement. Without much thought, Isaac opened the door and threw himself into the basement to escape his mother and maybe save his life. 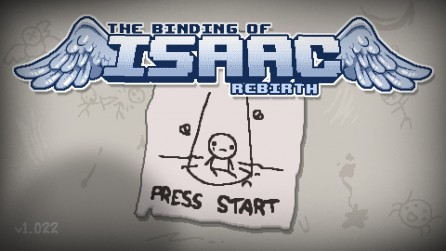 The Binding of Isaac is an action roguelike shooter that was originally programmed in Flash, created by Edmund McMillen and released on Steam in September of 2011. The game had a buggy track record on its initial release, and even to this day the final build of the original has its share of bugs, both interesting and game-breaking. However, the game had potential and Edmund McMillen sought to re-release the game—built in its own engine that could add functionality to the game that was lacking in Flash. The whole story of the game can better be told through the Gamasutra article McMillen posted regarding it, and it’s really an amazing aspect of the game in its own right. However, there’s more to the Binding of Isaac, and Rebirth as well, than just its development cycle. 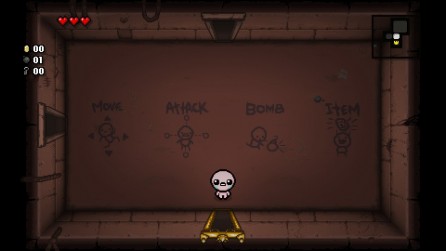 The Binding of Isaac was a unique take on the roguelike, as the genre was primarily turn-based and RPGish. Standard for the genre, the game focuses on procedurally-generated dungeons, enemies, and item placements. As you progress, the enemies get harder, the levels more surreal, though the items are still of variable quality. Like most roguelikes, this randomness is a blessing and a curse, as it makes each run unique—however, it can also be frustrating when you do not develop enough power to survive the later depths of the game. The game’s level design takes a cue from the 2D Legend of Zelda games in layout and proceedings, as well the item acquisition animation is similar to Link holding his treasures above his head. The game plays like a twin-stick shooter, though certain items can change the entire style of the game. Difficult and random, the game’s really fun to play overall even with frustrating kicks to it. 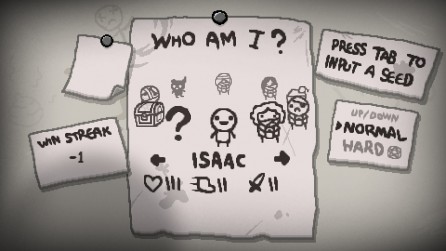 Different characters to add new challenges to your run.

The story is where the Binding of Isaac takes a turn for the dark, being based in part off of the experiences Edmund McMillen had with religion in his life. The game is named for, and the story based off of, the actual Binding of Isaac as told by the Abrahamic faiths. However, there’s more to the story than what is directly presented to you. Between levels you see Isaac lying fetal and having nightmares regarding events in his life—his mother scorning his affection, children making fun of his eccentricities, or even his own death. The items you pick up to give yourself power through the game also end up revealing more about Isaac’s tragic life. While it requires some thought, the story is not subtle, and will haunt you once you realize what’s going on. 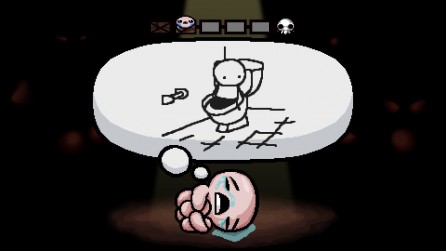 The art style is cute and absolutely adorable, having this quality like a child proud of their advancement from stick figures to more fleshed out bodies. This is not sarcasm; the art style is absolutely endearing and it would be excellent for a really cute game. However it’s also used to depict blood and dismemberment, and to tell this grim story of a child trying to save himself from his mother. This disconnect, in fact, is part of why the art style is so great. Aside from being beautiful, I feel it communicates the tragedy of the story we’re being told. In Rebirth the art style is more pixelated, similar to what you would find on a 16-bit gaming system, and McMillen has said that fits more with his original vision for the game art. It still possesses its charm, though, and the art is a powerful asset of the game. The game is showed as being part of Isaac’s artwork.

There is one thing, however, that all games eventually get graded on with me: gender and other social issues. The Binding of Isaac does both bad and good in this regard. Edmund McMillen has stated that one of his goals was to explore gender and sexuality through this game, and I believe that’s been done pretty well. Without using words to explain it, there’s heavy implication that Isaac is probably genderfluid or some other sort of nonbinary gender identity. There’s also heavy implication that Isaac is not heterosexual. All of this is done without portraying Isaac as evil or deviant because of it. With all the good in this area there are, however, two items that make use of racist stereotypes in this game. One is based off of a meme that was popular around the time the Binding of Isaac was released, and is easy to dismiss as being a product of internet culture at the time. The other item is based off the Greco-Roman god Cupid—however it makes Isaac wear a feathered headband similar to what one would stereotype an American First Nation’s warrior to wear. This is confusing because I’m not sure what this has to do with Cupid. The game otherwise performs admirably with regards to social issues, and the two negative points rarely make appearances in the game. 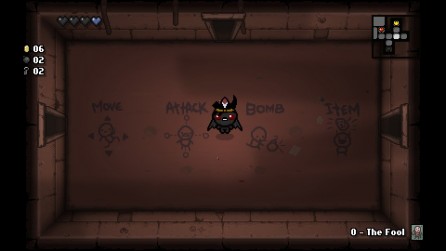 This has everything to do with Cupid. A feathered headband worn atop a naked demon baby. Blackface on a different devil baby. This was totally required.

While the game is overwhelmingly positive, there are a few negative aspects. Being a roguelike, the game is often randomized, and this random element can kill you if you find yourself getting the wrong items. As well, the game is dark and gruesome. It deals with unpleasant topics such as child abuse, drug abuse, sexually transmitted infections in children, children born addicted to drugs, suicide, and broken families. The game also features plenty of blood, vomit, feces, urine, and possibly other unpleasant bodily fluids. As well there’s plenty of disgusting enemies ranging from spiders and flies to parasitic worms, and enemies made of blood or feces themselves. The game’s humor runs from dark to childish with little to no warning for such tonal shifts. All of this should be taken into consideration before purchasing the game for yourself or others. 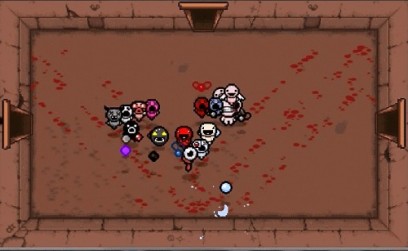 Testing out the familiars in The Binding of Isaac.

Would I buy the game? I have done so—twice! Would I recommend the game to others? Wholeheartedly. This game is fun, addictive, and worth the fifteen dollars you’ll spend on it. Just buy the Rebirth edition and not the original one. 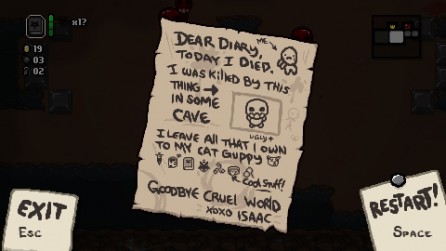 Trivia Man is a superhero who never answers trivia questions.