This year, I did one thing I swore I’d only do once I got old enough to need a sports bra for my balls to keep me from tripping over them as I walked—see a doctor about some long-standing issues. One of these was the remnants of my long past depressions that I mostly solved with philosophy and powering through, but could not solve the off-balanced chemicals in my brain. Long story short, I got me some meds.

“Oh, praise the God that doesn’t exist!” I hear your smarmy, atheist ass say, “the reign of bullshit has come to an end!” Not so fast, vagwank. I didn’t get meds to make me normal, I simply got meds to make me enjoy things again.

And from there, I soon started noticing I was having a huge craving for gaming of some kind, but couldn’t figure out what it was. I went all over the spectrum looking for what it was pointing to and found it in mid-September: import Sega Saturn games. It’s not quite a secret that Japan had a much better showing for the little system. I always wanted to get into it but could never find an affordable way to build a library—however, many would be surprised how easy it is to get virtually the same overpriced, hard-to-find games in America if they just suffered the purchase of a Pro Action Replay.

The Sega Saturn version of the first Resident Evil is one of those games. 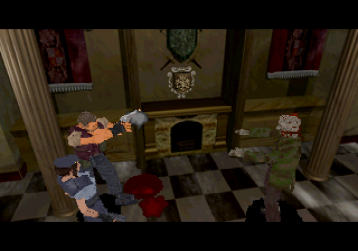 Many gamers like to prop themselves up as the bastion peaks of human cultural evolution, but let’s face it—you lot are lazy in ass and mind (and your face ain’t exactly winning the race either). Just for the price of a region-bypassing cartridge and being creative with Japanese text, you don’t have to pay outrageous fees for these games. You order a bunch of the super-rare English games for pizza money in many websites. For a game like the Sega Saturn Resident Evil, you basically have no excuse on two counts:

1. This game is extremely easy to find online guides for, if you’re not already highly familiar with it.

2. This is basically THE ENGLISH VERSION OF THE GAME with only the written dialogue translated into Japanese!

While I’m sure you weeaboo types had fantasized about hearing an ultra-kawaii version of the “Jill Sandwich” line, you’ll have to save those fantasies for DeviantArt monstrosities like this (WARNING, not safe for work or engaged types like you, Michael) [Editor’s Note: There was no link. Maybe it’s better that way.]. It’s only the in-game text that’s in Japanese, and most of it isn’t that important to the gameplay anyway. I can only really see it being problematic for someone new to the game, and if that were the case, why would you start on this version in the first place?

You kiss your mom’s ass with that mouth? I don’t need to introduce you to Resident Evil; you know what Resident Evil is by now. It’s the seminal survival horror—zombies, monsters, mansions, guns, cops, mystery, betrayal, limited ammo, secrets, characters that control like constipated Panzers…all that stuff is here, and it’s very much the same version everyone knows and loves. 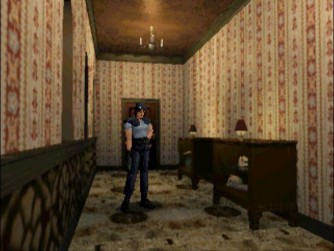 I mean, hell, how many versions of this game are there now? The PS1 version, this one, the Director’s Cut version, the Dual Shock version, the GameCube REmake, the Xbox HD REmake of that REmake coming out soon, the almost GBC port of that, the Wii port of the GameCube one, the DS remake—what makes this early port on a substandard 3D console worth noting about?

Well, you (or I) would be right on that last count. This port does suffer some inferiority, but not so much that the classic fun of the game is compromised. It’s very true the graphics are downgraded, and it’s mostly noticeable in the pre-rendered backgrounds (although the character models seem to have a nearly unnoticable upgrade in their modeling). I also personally found that the Sega Saturn controller needed some getting used to, having cut my teeth on the original PlayStation version (which is how I learned CDs are not food way too late in life). As for the music, I couldn’t quite tell if it was the same or downgraded too, but I’d probably wager on the latter (though that should give you an idea how little it was downgraded, if at all).

Worse still, the Saturn version also does not have auto-aiming, which a gamer like me really misses (literally) during battles in awkward-architecture’d parts of the buildings with even more awkward camera angles. You’ll lose a lot of ammo and likely your head more this way. There’s also some HORRIBLE load time between room transitions. It just hangs there for a full two seconds before slowly proceeding forward. I thought something was wrong with the disk when this happened, and then later I watched a Let’s Play to confirm it. The game still feels and plays like the classic it is, but it does feel like this version is worse for the wear all the way around. Slightly more janky and chunky feeling; not to mention looking. 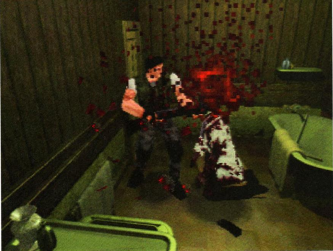 But, those are more like things to be aware of as you play as opposed to giving you a reason NOT to play it. Want some reasons to get your own $15 copy? Here’s some:

1. An exclusive Battle Mode minigame, the first of many to come.
2. Seemingly one of the only versions to actually have the infamous zombie-eating-decapitation scene completely uncut.
3. Enemies exclusive only to this version.
4. Game saves to the internal memory, which is a minor advantage, but still better than losing a memory card!
5. Extra costumes.
6. Other end-game surprises that I don’t want to spoil, other than to mention a unique zombie character you likely didn’t see coming, and those who beat the original tyrant in the lab will get a rude awakening immediately after.

You can score this game, like I did, quite easily online for a fraction of the cost of the obscure American one. Not quite as good as the PS1 version, but if you have a Saturn and a region-bypass cartridge of some kind, just get it. I have like 6 different versions of this game and it was still worth the purchase.