Ladies and Germs, it’s that time of year once again. Thursday the 12th of February and I’m bitter and alone so get yourself a box of chocolates and a salt shaker for your Bloody Mary, it’s time to get NaCl (look it up).

So I was thinking, what can I write about for my beloved VD-day that hasn’t already graced the bathroom walls of the GameCola headquarters. Something that isn’t likely to get me immediately fired; out of a cannon and into the sun, that is. Sakura Spirit is relatively popular right now. Wait, this is GameCola, I can’t write about what’s popular. Akiba’s Trip? Well as much as I love the game, Strip fighting vampires in the streets of Akiba isn’t exactly PG-13. Actually, it’s exactly PG-13, but the subject matter is still a touch risque. Depression Quest? No, Robyn already covered that.

How about something strange and magical?

Or how about the opposite of that: It’s a Radioactive Dating Simulator! 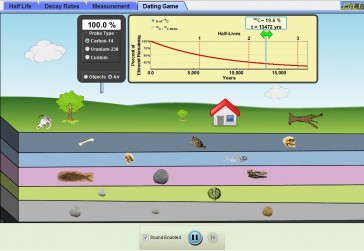 So…this is an educational application developed by PhET Interactive Simulations in conjunction with the University of Colorado. They write teaching tools for the sciences to be used by everyone from elementary school through the university level. So, all due respect when I treat this as a joke, but I couldn’t find a more accurate representation of what I was looking for in a “dating sim”.

Pictured above is the actual “game” portion of this Radioactive Dating Game, and honestly I’m not all that well versed in the process so I’m not sure how to “play”, but what I gather is that you drag your Geiger counter or whatever it is over to whichever object and type in that object’s age. Being that I have no idea how to take measurements of these things, it’s totally dumb luck that I was able to guess the age of that house correctly. After seven tries, I found that it’s 60 years old. We can, however, use that to dial in other results like that cow skull.

And that cow skull is 132 years old. I guess it’s been there twice as long as the house for some reason. It doesn’t even appear to be buried by any stretch of the imagination. At least that gives me a way to triangulate the workings of the application. Basically there’s a meter to show you what percentage the carbon in the object has degraded to, and a slider with all the necessary information to fill in the blanks. Pretty simple concept, but I wonder how accurate to life these tools are. Any students in the field, leave a comment because Id love to know.

I’ve tinkered with the mechanic and it seems to have about a 5% margin for error. That seems pretty generous when you’re dealing with someone’s potential livelihood, but what do I know? I don’t even go to this school. When you fill in all the correct ages—and this requires all the tools at your disposal (it really doesn’t but let’s pretend it does)—you are congratulated with some Windows 3.1 or earlier fanfare. Good job. Damn it, I was hoping for boobs.

Well, we might as well check out the other screens. The boring ones that aren’t called “games”. 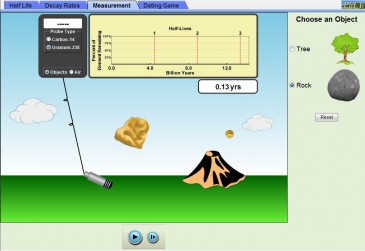 This is “Measurement”. You can plant a tree and watch it instantly die, then keep track of the decay of its carbon-14, or you can…erm…volcano…a rock…can “volcano” be a verb? Let’s pretend. Pretend is fun, and that’s what games are made out of. Fun and computer data. Mostly fun, though. About 80-20, with a 5% margin for error, because that’s what this game’s really about. Hail the 5%.

I got sidetracked. You can volcano a rock and watch its uranium-238 deplete. Riveting stuff. 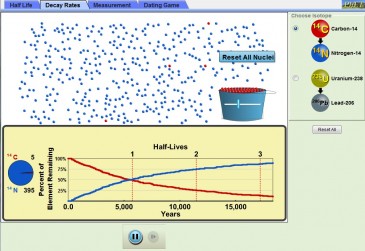 Here you can populate a blank space with carbon-14 atoms and watch as they turn to nitrogen. The graph serves little purpose as no matter how many times you run the simulation, or with which set of elements, it always looks the same. Within a 5% margin of error of course. 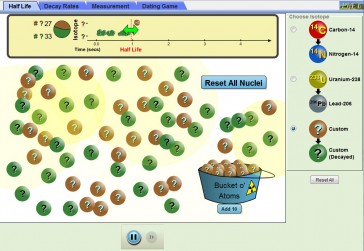 And lastly, as simple as it is, this is probably the most interesting screen. You can place the atoms wherever you like, customize one of the atoms, and reset the graph any time you like. I have very little idea what that implies, but it’s gotta be something really cool…right? Right?

At any rate, I’ve got to get to the midnight release of Monster Hunter 4. So keep rooting for Hydrogen-chan to hook up with Oxygen-san, and look for me in the usual places. I’m on the road to being a more active streamer, and a well-seasoned developer. Barbeque. Next month, Mystical Ninja starring Goemon! Ore wa, gorgeous! Aaah, impacuto!

Guest review by: Geoff Osman Project Gotham Racing 2 (MXB) Hey bitches! I'm back from the dead! To celebrate this wonderful occasion let me review a game that has been dropping my grades like crazy si