That’s how much money it would take for Diana to get to Tokyo to participate in this once-in-a-lifetime event. Commence the sobbing now. But I’m getting ahead of myself.

I’m sure you’ve all heard of things like Adventure Rooms, where people work together to solve a puzzle and escape from a room or maze. Admittedly, I don’t really know all that much about it, but it was mentioned on a podcast recently. WELL GUESS WHAT? 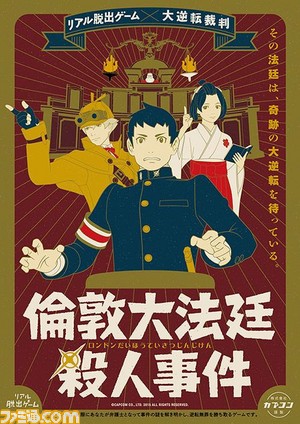 Yeah, that’s right. As if I wasn’t excited enough about Dai Gyakuten Saiban, they now have an Adventure Room-esque attraction for it. Opening in Japan on June 26, the event is called “The Great London Court Murder Case”. Ryuunosuke is suspected of murder, so players’ task is to help Holmes solve the crime and prove the defense attorney innocent! Participants must be able to find the clues and find the killer in typical Ace Attorney fashion, or so I’m assuming. No other details have been released, but we also have this fancy trailer.

So basically, if you are in Japan this summer, you’d better go check this out! It looks amazing!

If you’re eager for more info on the upcoming Ace Attorney, you won’t have to wait long! NicoNico Chokaigi will feature Dai Gyakuten Saiban on April 25 and 26! There will be a live stage show with new information about Capcom’s upcoming games and playable demos as well. For the record, the last time an Ace Attorney game was at Chokaigi, it was Dual Destinies, and we were SWAMPED with information (i.e. Apollo’s return, a firm release date, and the kickoff of the real marketing campaign) to prepare for the game’s release in Japan the following July. Fingers crossed that the same thing happens again!

One thing is for sure: as the release date for Dai Gyakuten Saiban (July 2015 for Japan) draws closer, the hype is steadily building. I can’t wait!

Also, a casual fangirl note. DID EVERYONE SEE THE ADORABLE 3DS BACKGROUNDS?! LIKE THIS! (My personal favorite)

There’s three more of them and at the moment, they’re Japan-exclusive. Please release these over here, Capcom! I would buy them all.

That’s all for now, but I’ll be back near the end of April at the latest to report on the madness of Chokaigi! Fangirl out!

Ah yes, our little green friend Yoshi. Let me take you back to the turbulent time known as 1991. America was still adjusting to the end of the Cold War, but more importantly, we were eagerly awaiting