It’s June 7, 1995. You’re Kaitlin Greenbriar and you’ve spent a year in Europe. You’re home for the summer before beginning the next chapter of your life. However, you’re getting home late—your plane was a cheaper late flight, but what’s worse is…nobody is home. There’s a note on the door, “Katie, I’m gone. Do not look around.” Signed by your sister, Sam. It’s also a new home, so you have no idea where anything is, least of all your room. You look in a cabinet you always keep outside, always keep a spare key in, and enter the house. Traveling through your family’s new house will lead you on a journey of discovery—of your family’s new home, and what’s really going on when you’ve… 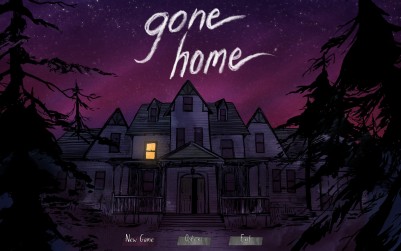 Your father inherited the house from his uncle.

Gone Home is a point-and-click adventure game in a 3D environment. You play Kaitlin Greenbriar as she comes home to an empty house, expecting her family to be home. As you wander the house, you interact with various objects looking for clues as to what’s happened. At times you locate a key item which sparks memories from your sister’s letters to you during your trip to Europe. Similarly, you’ll find music cassettes, records, and other pieces of the environment to interact with. You’ll find letters and documents telling four stories going on while you were in Europe, but the major story is from your sister. As you walk through the house you’ll learn that nothing is as it seems, and there’s something very wrong. The story is captivating and has you wandering the house looking for more. 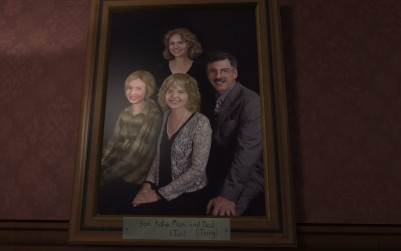 And you thought your family portraits were awkward.

It’s a fairly standard point-and-click adventure game. It doesn’t do much that’s groundbreaking for the genre, really. You move with the WASD keys and pick things up by clicking with your mouse. As you mess with items and notes, you receive audio narration from your sister in the form of her letters she sent while you were away. Through your exploration you’ll find three other stories in left behind letters and notes, each explaining what another member of your family was going through. Puzzles are simple and really aren’t a thing. The game is more focused on narrative and exploration, with puzzles and active gameplay taking a backseat. The game’s fun lies in finding more of the story and exploring your environments (or you could just throw every item into a garbage can), I personally found that enjoyable. 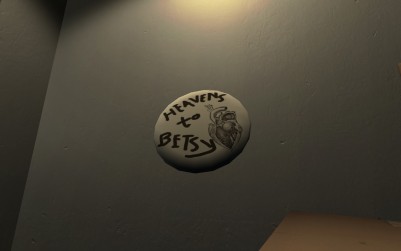 Some music was provided by Heavens to Betsy, and their lead singer offers commentary for the game.

The game’s art is kind of mixed. Visually, the game is kinda plain, but the audio is something else. You walk around a rather normal house through the game, and while it looks well-rendered it also is pretty normal. You do find various personal drawings around the house, which add some variety to the visuals you see. However the audio is pretty fantastic because, on top of your sister’s narration, there’s also various musical cassettes scattered around that provide you with music from bands of that time period, as well as a gripping original score. The most interesting part about the music is there’s a band mentioned in-game, and a real small-time punk group provided music for this band. The game’s writing is really artful and tells the story in a nonconventional way. Gone Home is a good example of the artistry found in videogames. 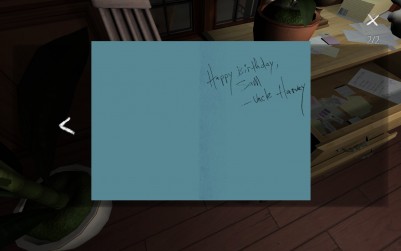 There’s not much negative about the game that I could say! It gets a little bland sometimes, and it can be confusing looking for some of the later story elements. There’s a demand for a decent amount of attention to detail, and you’re expected to look at everything that sticks out. The story gets emotionally heavy, and while many take emotionally charged narratives as a selling point, some people would rather play games with stories that aren’t so evocative. The worst thing is the building atmosphere of tension that just keeps developing, as well as the many misleading story hooks you’ll find scattered through the house. However, the game’s overall really great, and I don’t consider these to be deal breakers in anyway. 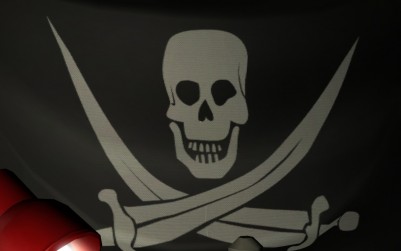 Oddly, pirates are a recurring story element to this game.

To sum it up, Gone Home is a well crafted 3D point-and-click adventure game. It tells several emotional stories with the main one being heart warming, heart breaking, and very emotionally evocative. There’s audio and narrative artistry holding the game in place, and making you want more. The best part about it, though, is the very end when you learn just what is going on. I would absolutely recommend it! Would I recommend spending money on it? Yes I would, but unless you’re a fan of narrative intense point-and-click games I would recommend you wait for a sale.

So does Sam, apparently.

Sam is becoming a pirate punk!

Secretly a guide to playing Chun-Li in Street Fighter.

While Mom has a story too, she’s not as interesting as Dad and Sam.

Just to explain, Band Hero is Guitar Hero for kids; everything offensive has been removed in what I like to call the "Don't Offend The Serious Christians" edition of Guitar Hero. In case you aren't aw