With the awareness that my continued reviewing of these sorts of games will lead people to believe that I am into a darker genre (which really isn’t true, I assure you), I have now decided to share my opinions on one of my childhood memories of gaming. Also, I’ll just go ahead and mark this review as not safe for work because the main point is killing and maiming, and if you were to play the game at work you might get a few weird looks from your co-workers (unless you’re at school, in which case your teachers may disapprove).

While not typically the type of game people would expect an eight- or nine-year-old girl to be playing—at least people who don’t live on the internet—I always had a fondness for Dungeon Keeper. Ah yes, those lazy weekends of sitting at my old Windows 98 computer while torturing my captive enemies…let me explain. 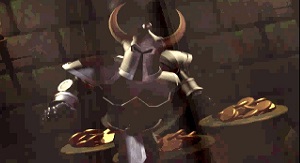 Meet the hero of our game.

This iron-clad chap is the Lord of the Land, and he is here to kill you. You are the Dungeon Keeper, here to disturb the peace and take over the world from the underground. Using your various creatures and minions, you will tunnel under the ever happy-go-lucky land above you, hoarding gold, building your empire, and (when the time comes) you will vanquish any hero who dares to rise against you!

Beginning with only your loyal Imps and Dungeon Heart, it is the goal of each level to expand your dungeon and overwhelm the heroes and other Dungeon Keepers alike. Of course, Imps are cowards and make terrible fighters—unless you train them to level 10, and who has time for that? Luckily, they are fantastic at digging tunnels, fortifying your walls, mining gold and gems, and claiming rooms. Imps are your basic slave-labour. You don’t pay them, and if you want them to work harder you can always give them a little slap because, really, they should have claimed that portal several minutes ago—I need my REAL minions thankyouverymuch. 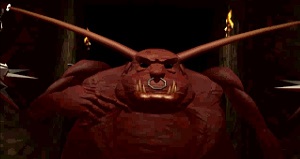 This guy right here? He passes poisonous gas. Not even joking right now.

After gathering several types of creatures through different means—Dragons are attracted to wealth, Trolls are attracted to workshops, &c.—and building a variety of rooms, you are finally ready to prepare your sometimes-loyal army for the upcoming battles. “Sometimes” because, unlike Imps, the big guns don’t work for free and demand a lot of space and benefits. The words “your creatures need a bigger lair” will always haunt me.

In addition to gaining minions through incentives, you can recruit minions in a number of more satisfying ways. Personally, nothing says “loyal servant” like beating a hero into a near-death state, dragging him back to your prison, and then torturing him until he either joins you alive or dead as a ghost. If you don’t have the patience for that, though, you can always let them die in prison where they rise as skeletons, or take their corpses to your graveyard where they can rise as vampires. What can I say? I love a game with variety!

Although the graphics pale in comparison to what we have now, at the time they were the standard and in no way diminish the quality of this game. The dark tone suits the mood, as does the ominous music and baritone voice-overs. Mouse clicks and side scrolling get you everything you need and take you where you need to go; it isn’t a hard game to master. Strategy, on the other hand, starts to kick in around world five. Seriously, brute force will only get you so far when resources are limited and your creatures are more than happy to waste all of your gold in the training room and then leave you when you can’t pay them.

In all fairness, every game has its drawbacks. In the case of Dungeon Keeper, it would have to be the AI. The enemies soon become easy to anticipate—although they can still overwhelm you with sheer force, you know exactly how they’re going to do it. It might have also been a nice touch if the enemy bases were randomly spawned. I can’t tell you how many times I would dig in random directions to find where the enemy was camping out, just to restart the level and avoid that area like the plague. 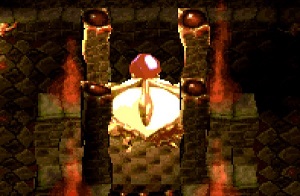 Dungeon Heart—It’s the heart of your dungeon.

However, as I said, this game was one of my favourites when I was younger and I love it just as much—if not more—today. I often find myself revisiting this game, even knowing the levels and the strategies that get me through. It still gives pleasure to watch the good fall as evil prevails because honestly, there just aren’t enough games that go “here, you are evil, destroy everything!” and personally, I love when taking that approach results in a game like this.

As a final note, if you ever find yourself with a Horned Reaper on your side, it is a lie. He is not your minion, he is not your ally, and he is not your friend. He is angry. He is violent. He will kill all of your other minions.

When I was younger, my family used to watch old Disney Sing Along Songs VHS tapes.  You know, the ones where they'd show clips from Disney shows/movies and you could "follow the bouncing ball" while