Everyone at GameCola is legally required to be a fan of Phoenix Wright. That’s in the official staff contract, between the paragraph on cheese whiz and the clause about pet marriages. So it comes as no surprise that at least one of the staff members, i.e. me, is excited about Regeria Hope!

This game is basically a gender-swapped Phoenix Wright. Rookie lawyer Regeria Hope has a client who was accused of killing his girlfriend. In the trial, Regeria butts heads with an evil prosecutor who has a personal grudge against her. Can Regeria save her client and find the real killer? Or will she throw the trial, in exchange for huge bribe? 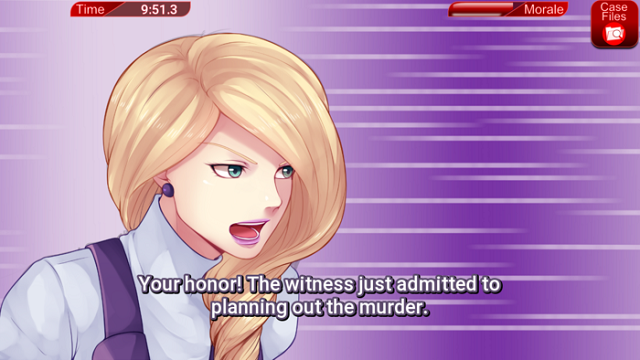 The first episode of the game is available for free, and I did a video walkthrough for it. Naturally, I took the bribe and threw the trial. Regeria ended up so rich, she was able to buy a turkey sandwich.

Sadly, turkey sandwiches can cost a lot of money, as the game’s designer figured out. So he’s put the game on Kickstarter! He’s looking for $6,000 to see the game to completion, and they’re already halfway there! Woo hoo!

In the past month, there’s already been a fair amount of progress done on the game! They got extra artwork and official voices, and the developer is talking about new gameplay elements, like witness prep and talking to jury members! It seems interesting, and I’m hoping the game gets completed.

Doctors hate him! Find out how a researcher improved vision with one weird trick.