Editor’s note: This article was written and scheduled before Valve made their latest announcement recognizing that literally every person thought paid mods were a terrible idea. That said, we’re not ones to let them live it down—and, who are we to waste decent content? We’ll let this article stay.

As some of you may have read yesterday, Steam has begun a new practice of allowing mod makers to set their own price and sell their Skyrim mods. Let me begin by saying that I’m not here to tell content creators what their items are worth. If a person believes that their armor set is worth $25, then that’s fine. It’s up to them to set the price and up to the community to decide if it’s worth it. But, there are several underlying factors that are leading me to believe that this practice is going to both begin and end with Skyrim. 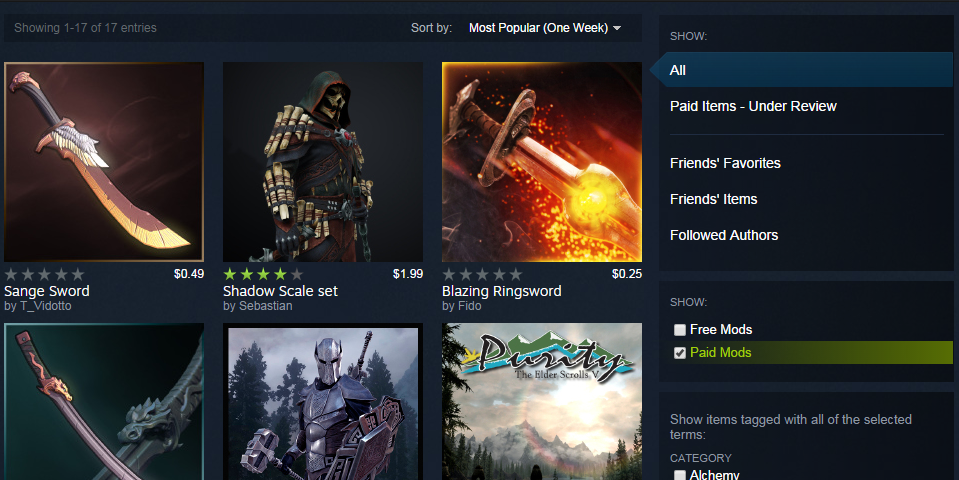 First, let me get some things out of the way. There are some ideas here that I like. I really am a big fan of the fact that modders can either set their own prices or allow consumers to pay what they want. This allows creators to be flexible and earn some goodwill from the community…and, I lied. That’s pretty much the only thing I like.

Just so you’re all aware, modders aren’t actually making as much money as you might think off of these mods. Every mod sold on the Steam Workshop only nets the content creator 25% of the sales price. The rest of the money is split between Valve for hosting the mod and Bethesda since Skyrim is their intellectual property. Even with this era of paid mods, a modder would have to have an incredible amount of work on the workshop to even consider mod creation as anything other than a means of extra cash. What was once a draw that made a bunch of people purchase Skyrim has essentially been turned into a quick cash grab by both Bethesda and Valve as a result of this split, which I quite frankly believe is unfair.

This person will make a total of $6.04 if I buy all of this…at least, if these mods were all made by one person.

This mod scene will also not be curated by Steam, which is understandable considering the fact that there are so many mods that it would be impossible to have quality control for all of them. But, this also means that plenty of new content creators looking to make a quick buck are inevitably going to flood the market with garbage, making it that much harder to sift through high-quality paid mods that would actually be worth your hard-earned money. One paid mod, Chesko’s Fishing Mod, has already been removed for using content from a free mod, Fore’s New Idles in Skyrim. How many more might be doing the same thing? I honestly couldn’t say.

Even then, there are plenty of other avenues through which a person can acquire mods. Skyrim Nexus has already announced that all of the mods on their website will stay completely free in light of this news, a decision that I can’t help but applaud them for. When the consumer is presented with two items that are the exact same quality, with one costing money and the other being completely free, I think it’s safe to assume that they will be taking the free option. You can bet that Skyrim Nexus will be seeing an increase in traffic after this.

There was honestly a way to implement this whole system well. All Valve had to do was add a “Tip Creators” button, allowing mod users to give mod creators money and support them without forcing a price on the user. With mods having been historically a free way to enhance your game, this would have been a nice way to encourage people to tip the creators they like, without making it seem like Skyrim now has more DLC than Train Simulator. But, that’s simply not going to be the case now.

I predict that this isn’t going to end well. Most players are going to forgo these paid mods and instead flock to free options offered on Skyrim Nexus, other smaller websites, or even the Steam Workshop itself. What we’ll be left with is a nice experiment. After all is said and done, Valve and Bethesda will both know that they should never try anything like this again.

Julie Kozarsky offers advice about friends who play crappy videogames, gaming while your roommate's around, and more.