It’s the Old West, and you live on a buffalo ranch. You wake up one day, and your mother asks you to help your brother to heard some buffalo. You see your brother, and he takes you to the buffalo corral and you get to work. One escapes, so you go off and chase after it. It takes you a long, long time to get that buffalo—day turns to night, but you finally get it. You return to find your home burned to the ground, the buffalo gone. Your brother in a pool of his own blood, he hands you his gun and tells you to find the murderer and kill him. Thus begins your story of revenge… 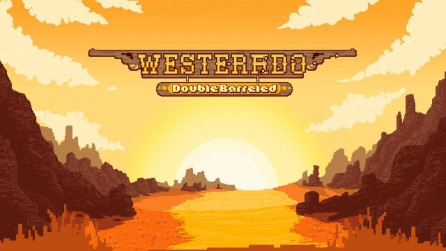 Imagine my surprise when my brother tells me the other night that we’re gonna play a game together. It’s actually fairly normal; he and I play games all the time. But he’s got a smile on his face that shows we’re either gonna have a good game, or we’re playing QWOP. He loads up this game that’s a retro-looking 2D sidescrolling Western, and after fiddling around we figure out how to play the game with its local two-player mode. Westerado controls with WASD or a controller, and it takes you on a tale of revenge through an open-world version of America’s Western expansion. You gather clues to look for your family’s killer, and you do this by helping out people in town. Your health is measured in hats; the game has an interesting cock and fire mechanic; and the shooting is intense, if a tad odd, given the medium. 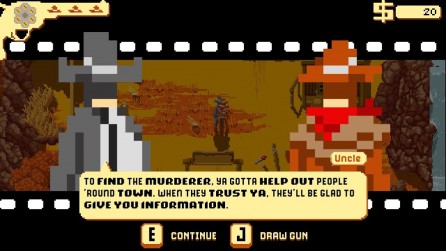 You play as a young man who had his family recently murdered, going about a classic tale of treachery and deception in the Wild West. The game’s story seems simple, but as you go through trying to gather clues, you’ll find that it’s more complex than that. Each quest you complete is its own mini-story and gives you a clue regarding the man you’re supposed to find. However, there are many different factors at work here, and you could get information from the Army, the First Nations, other buffalo ranchers, and a number of other people living in this bygone era. Each playthrough changes the game based on the quests you complete and your actions through the game. 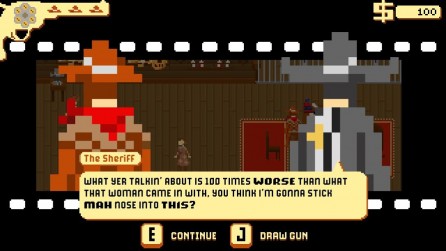 You can draw your gun during every conversation. Sometimes that’s actually helpful.

The artwork is charming, yet evocative of the Western aesthetic. Gun duels take place in graveyards, buffalo ranches, and mine shafts. The soundtrack is reminiscent of a Spaghetti Western. The game’s writing is gold in that it throws every Western cliché at you except for a comparison with the samurai films of Akira Kurosawa. Despite the simple graphical style, character models are different and each character is unique. The appearance of the characters even ties into the endgame. In all, it’s a very artistically pleasing game, and uses its resources to create a better experience. 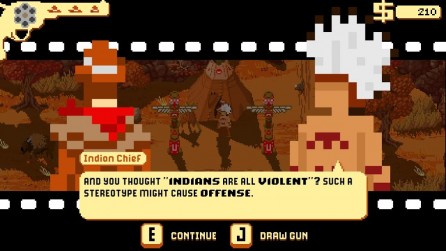 Self aware humor, yet spoken by a caricature all the same.

However, it does fall flat with representation. With only one playable female character, the game already falls short in this regard. However, it does get worse. One of America’s First Nations appears in the game, and while they’re trying to capture a style of an older time, it is still appalling to see them represented like this. Portraying marginalized groups as stereotypes is inexcusable, regardless of how the time period you’re emulating depicted them. It’s sad to weigh so heavily on this, but it’s really not an issue to be taken lightly. 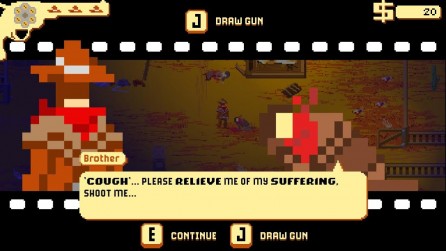 I’m not falling for that; not after what happened to Jack Kevorkian!

In total, is the game worth buying? I certainly think so. It’s a blast single-player, it’s a blast multiplayer. Whether you seriously try to take on the challenge of the quest, or you try to complete everything and amass personal wealth, you’re in for a good time. This is the Western game I recommend most, at least until they finally realize the money in porting Red Dead Redemption to the PC. 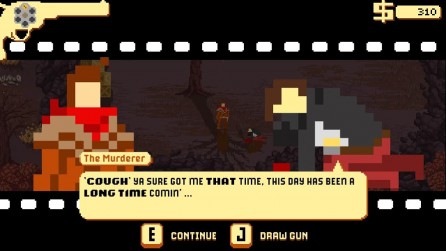 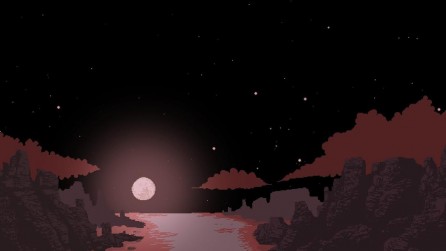 Nothing left but to ride into the night.