Let’s get one thing straight: I have a love/hate kind of attitude toward this game. I have no idea what possessed me to buy it, but I’m going to blame Diana Gray and her let’s play. Thanks a lot, Diana. Because of you, I had my heart ripped to shreds by a bunch of goddamn birds. I’ll get to the heart ripping later, but for now know that I am still not over this game several weeks after finishing it. 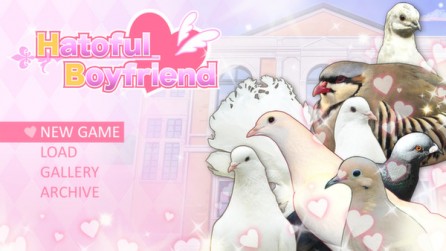 You are a young girl in her sophomore year of high school in Japan. OK, I guess that sounds normal enough. However, this high school is not filled with bubbly teenage girls and strapping teenage boys. Well, I mean, it is—but they’re not humans. They’re birds. You are the only human girl in a school of birds. What kind of hilarious antics can we get into with this situation? The dating pool consists of: 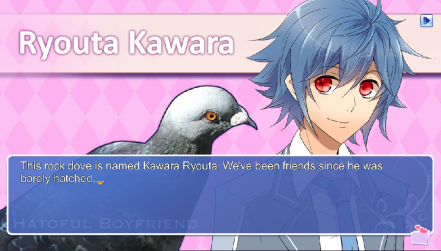 My beloved best friend. They show you human versions of most of your potential suitors.

There isn’t much else to say about this one…

So those are your fantastic choices. A few of them require you to build up skills in wisdom, vitality, or character. You do this by going to certain electives when the game prompts you to do so. Two other endings are available after meeting a really cool girl bird named Azami, which will happen no matter what you do since it happens over the summer (if you make it that far). If you take a summer job, you have the chance to help rekindle the love between her and this other bird, or you could say screw that and go for the ending where you and Azami make up a kick-ass girl gang.

That’s just the main game, however. After getting certain endings, you can start a new game and choose to live a normal life and go on to complete the dating sim part of the game, or to fulfill a promise. I would recommend finishing the main game before choosing to fulfill the promise because you will get a special epilogue at the end of this section of the game if you get every main game ending. It’s fairly long, and I decided to try to play it in one sitting. It took an hour or two (I can’t remember), and though it was long it didn’t feel like it was too long.

Fulfilling the promise begins like the main game, but includes your character having dreams about something that had happened many years ago. After the second term begins, everything starts going to shit. After realizing that Ryouta is nowhere in school to be found, you go looking for him in the infirmary and then the perspective changes from the girl to Ryouta. Your character is missing. The entire story then takes you on a visual novel-style murder mystery. It’s very interesting, since you learn a lot about the world this game is set in, how birds became so intelligent, and what happened to the humans.

So, this game was supposed to be a joke to me. “Hah, a game about dating birds. That sounds funny.” Not entirely. This game is actually thought out pretty well. I’m not even joking here—it gets really deep when it wants to. Other times, it decides to murder you because you didn’t want to mate with a pigeon/couldn’t decide which pigeon to mate with, or in some cases because you did want to date one of them. It was actually a lot more fun than I thought it would be, and there were a lot of emotions invoked that I did not expect. 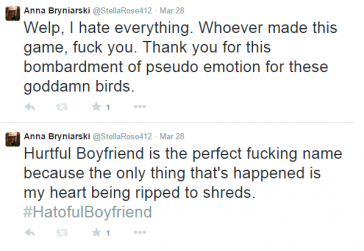 I was very angry the night I finished this game

When I said that I feel a love-hate attitude towards the game, it’s mostly because I wanted this game to be a joke so bad. But it wasn’t and that kind of pissed me off. Many an angry tweet came from me while I played. The game itself had some moments, for example Kazuaki and Nageki’s endings are pretty sad in my opinion, where I sat there and thought “What the hell? What is this? Feelings?” When I got through the entire game, I was in shock. This stupid game made me feel sad for birds. It wasn’t supposed to happen that way.

I would still recommend this game for people who think it’ll be a laugh, because it is. The dialogue is incredibly strange at points and the game itself is pretty enjoyable as far as dating sims go (I don’t play them often, and I’m not a huge fan). The game may not be perfect, but I don’t have much bad to say about it other than the fact that it wasn’t the joke I’d been hoping for. One other complaint I have is that sometimes the game expects you to choose something specific, and unfortunately there is no real indicator that you need to pick that certain thing. Most of the time it’s straightforward, but some small things are worth the walkthrough lookup.

The story was well written, if not a bit insane, and by a bit I mean yes it was weird and it’s something that shouldn’t exist but does. If you think it’ll be dumb or you’re not a fan of dating sims or visual novels, I’d say skip it. Then again, I’m not going to stop you if want to play, so give it a try if you feel so inclined.

You see a game perched on the store shelf, and you're thinking, "Hey, I've never heard of this game". This happens to me all the time, the most recent examples being Dead To Rights: Retribution, Mindj