In Ghost Puzzle, your goal is to destroy all of the ghosts in the puzzle field. To destroy the zombie goasts, the player must eradicate four or more of the same colour blocks as the ghosts, and those blocks must be touching the ghosts either above/below or to the side. You cannot destroy ghosts diagonally.

But this doesn’t make much sense in written form; this is the kind of thing you best figure out by playing the game yourself. Nobody wants to read about controls. They want to read about weddings.

Good thing you’re at GameCola, because you’ll be hard-pressed to find articles about games on here. 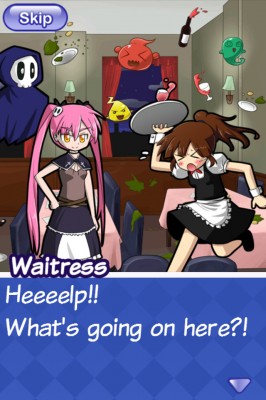 I ask myself the same question…

There are three main modes to choose from in Ghost Puzzle. The Story Mode focuses on Alice, a girl who is bored because she has nothing to do. Surely when you live in such a big mansion you might have a Commodore 64 or something stashed away in a closet, or maybe a few dead bodies. If I were her I’d make an expedition out of it, mainly because the idea of finding a Commodore 64 absolutely thrills me.

The idea of finding dead bodies, not so much.

Death shows up in Alice’s room because he is trying to capture some troublesome ghosts. Death decides that he will make Alice an offer. Because Alice can see ghosts and reapers, Death informs Alice that she can become a reaper herself. Because she has nothing better to do, Alice accepts.

Let’s face it, the game would be boring if she didn’t.

Though, ironically, the ghosts eventually team up to stop Alice from being a new reaper. Well if they hadn’t led Death to her, it wouldn’t have been a concern for them. Here’s another screenshot of a cutscene, which is something we are advised not to do when picking screenshots for our reviews. 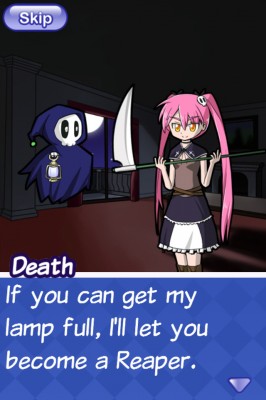 I had a joke about her reaping me, but I lost it.

The manzai (or “conversation comedy”) in Ghost Puzzle reminds me of the sequences from HungryMaster, except with far less nonsense and self-referential humor based around bodily functions, food and how poor the game is. Ghost Puzzle knows that it is a quality product, and doesn’t have to stoop to complete and utter madness. In other words, Ghost Puzzle has faith in itself.

If you’re trying to reach Whackoville Station, best catch a train with HungryMaster. That game doesn’t even pretend to make sense; just look at this example. 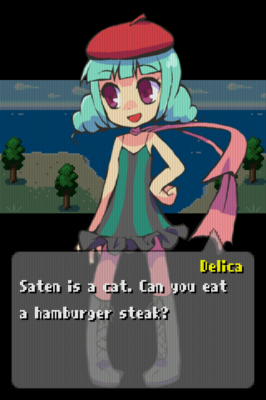 Back to Ghost Parcel. There is also an Endless Mode which does end when you lose, making it not so endless. Last is the Score Attack Mode, where the player must destroy a set number of ghosts in a set number of turns, for points. This mode has leaderboards via GameCenter. I felt that all three modes are very similar to each other, with Score Attack Mode consisting of Story Mode stages but outside of Story Mode.

I basically just played the game for Story Mode. At least I’m honest. I was genuinely interested in Alice’s journey to become a reaper, and a few of the cutscenes had me laughing quite a bit. Hands down, the Internet Cafe has the funniest cutscene.

I got stuck a lot because this game is a brain taxer and I’m a stupid idiot. It is natural to feel challenged occasionally, at least when you’re me. If you do have trouble with a stage in Ghost Puzzle, you can spend a coin to see the next correct move to solve the puzzle. The player can hold up to five coins at a time, and must earn them through Endless Mode.

In other words, play enough Endless and you can cheat through Story Mode. Helpful if you suck, like I do. But explaining all of this must be boring to read, so here is another screenshot of Ghost Puzzle. 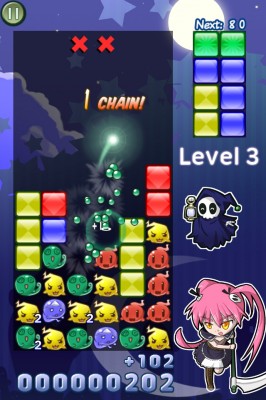 The soundtrack is cheerful and upbeat. It has obviously been influenced by the whole retro movement in the “indiestry.” However, I instantly found it grating and almost immediately went to turn it off.

One downside to Ghost Parsley is that you are unable to play your own music in the background, because the application mutes all music when it launches. So if I want to play without the soundtrack, I have to play without music at all.

Only sad faces were seen on that day.

Does anyone else think Death looks like Skeleton T in this game? Absolutely no doubt a nod to the series of games that inspired this one. And I hope that “inspired” you to play Ghost Puzzle. Ha! See what I did there?

(Of course you did. You are reading this. That was an example of bad writing.)

There isn’t really much else to say about Ghost Puzzle other than try it. There is a “lite” or “trial” or “whatever you call it” version of the game available on the AppStore and GooglePlay, so go out and take a gander, seeing as it doesn’t cost you anything to do so. 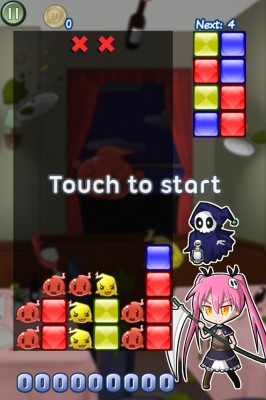 But seriously, check out this game and see if you’ll like it. I’m sure you will. As of now, the full version is only a dollar. Also, the trial version has twenty exclusive puzzles that aren’t in the full version, so you won’t be wasting your time if you decide to buy this well-made and enjoyable puzzler after going through the hassle of getting the free one.

Get on it. The presentation is absolutely right. The art-style is fascinating and the palette is well picked. Ghost Puzzle is a beautifully colorful game that I recommend to every puzzle game enthusiast.

Hey, there’s your sound-bite to put on the official website. Cheers.

2020 was a bad year overall, but how was it in terms of videogames?