When I reviewed Contra ReBirth, I really picked that story to shreds. I basically said that the poor translation and terrible story ruined the whole experience. Yet now, I’m reviewing HungryMaster and I’m about to applaud that very same terrible nature of writing. I am a fucking hypocrite.

The best way to explain HungryMaster is to just get on with it. You play as a cute girl named Delica who usually spends her time foraging around for food. One day she stumbles across a talking cat named Saten. She signs a contract with him and, in return, is bestowed with magical powers.

Delica now has the power to turn monsters into food. She must collect this food and deliver it to houses. Again, I’m not quite sure why, because it isn’t explained properly. On the journey, there is plenty of poorly written dialogue. Most of it is about eating or drinking things. You will discover that Saten is an alcoholic, and that Delica is embarassed about her flat chest. Such is the quality of writing in Japanese games. 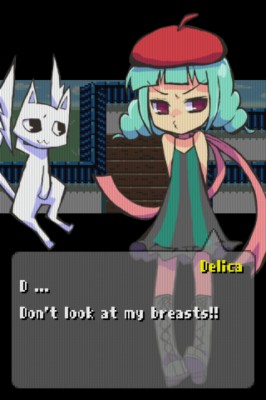 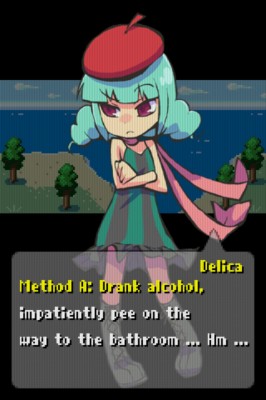 The game itself (besides the drawn out, poorly written dialogue) is unique. I see a lot of games on the AppStore that are focused around launching angry animals at styrofoam castles, or cutting up various types of fruit or vegetable. HungryMaster is entirely different, and therefore it deserves a mention.

You have to move Delica around the play area, searching for enemies. When you discover them, you must draw a line starting from Delica that then overlaps with the monsters. When you let go, the line turns into a magical spell and transforms the monsters into food or drink items. Depending on how long you charge your spell for, the monsters become different types of food or drink.

You need to collect these items and then make your way to one of the houses. You have to provide the amount of food that the house has requested. Either giving them just the amount that they requested, or filling your bag entirely, will reward you with a temporary health bonus.

When you have collected 20 items or more, you can convert them into a bomb attack, somehow. This destroys all enemies on screen, but they do not drop any food. To defeat the bosses in the game, you need to use the bomb attack.

That’s all you need to know. It won’t stop you from sucking, but it’s a start. All of the control schemes are horrid. 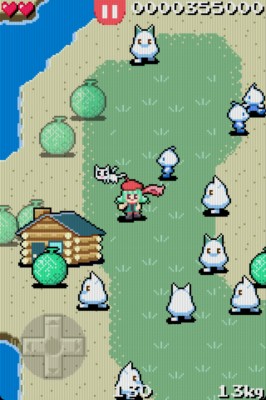 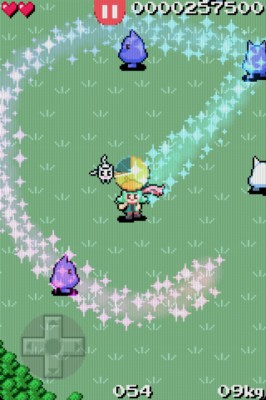 To Top it All Off

HungryMaster is a really pretty game. The character artwork by artist Hanikura is sweet and charming, with beautiful large eyes and mellow colors. The sprite-work within the game is reminiscent of 16-bit RPGs, especially with the top-down perspective. The game screen has a subtle scanline filter applied, which gently implies the game to be a homage to traditional arcade games.

This is one of the few things that brings me back to the game. 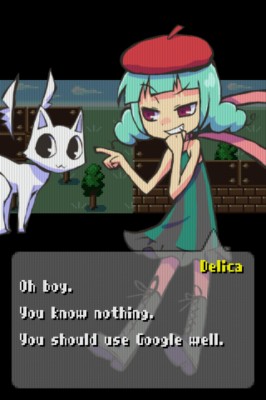 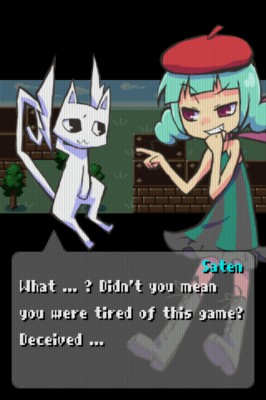 What does this even mean…? I don’t know anymore.

The official website doesn’t have much faith in the game, saying that the game is full of crappy content. On the other hand, I really dig it, since it’s available for free. I recommend that you download HungryMaster right away, because you might as well do so. It’s difficult to play, but it’s worth a shot just to see if you feel it. This is a neat little jewel that you may have otherwise overlooked.

Just an extra little note: When I first downloaded HungryMaster, there was a crippling control bug. A mere day after I reported it, the bug was fixed, and the game worked as it was previously intended. That is commitment to your craft.

This month is the last of the games we torture each other with out of our own collection. Next month, I mean it: We're going for the complete bottom-shelf shit games for rent at Hollywood Video. Just ...