Your journey starts as you’re defeating a camp of renegade elven mages, determined to harness the power of a toxic landscape. You’ve found notes from their lead inquisitor stating as much, and can’t let them regain their power. Or, perhaps you’re a freshly created undead having gained sapience in an unexpected accident during your creation. After murdering your creator and stealing a cloak to disguise yourself as the living, you climb to the surface to make your way. Perhaps that isn’t the case still, and you’re the servant of a demon having escaped your bindings, and made your way to the mortal realm. Whatever your origin, your story is just one of many… 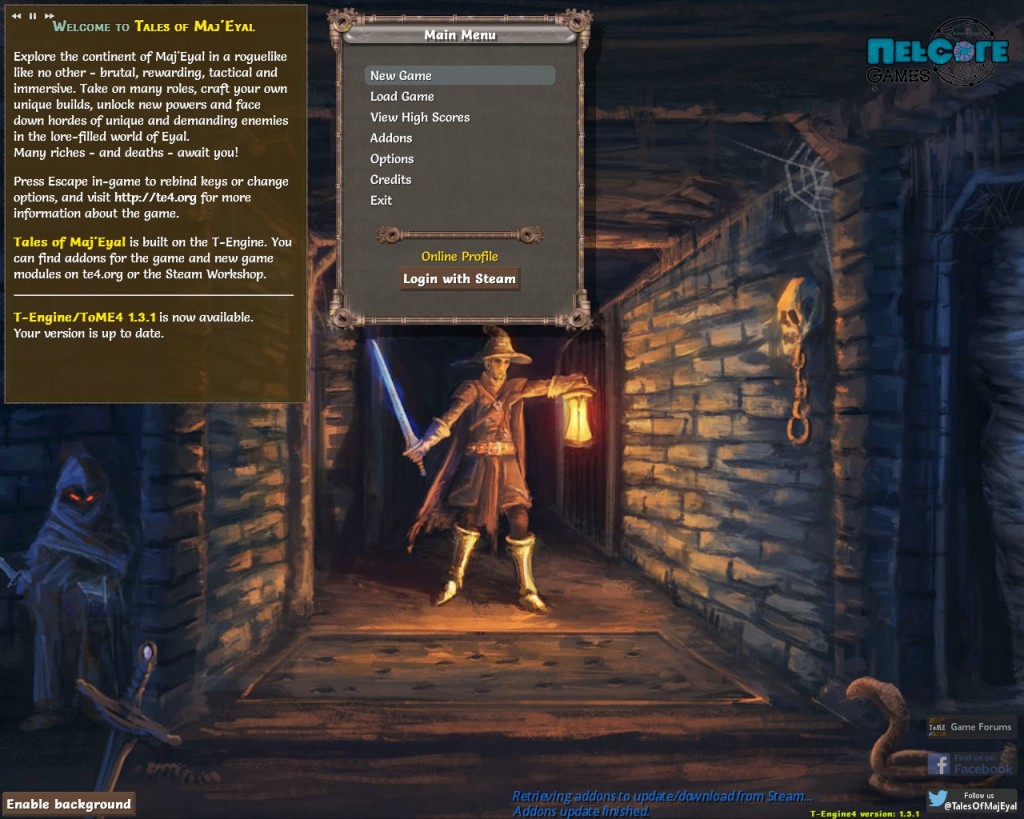 Tales of Maj’Eyal (ToME) is a freeware open-source roguelike built like many of the classics of the genre. You move and attack with the number pad and keyboard shortcuts, or through right- and left-clicking with the mouse. Originally, the game was born as Tales of Pern, set in the Dragonriders of Pern novels; however, a cease-and-desist changed that to Tales of Middle-Earth. The game changed names again when the main development team feared they would be hit by another cease-and-desist from the Tolkien estate, and also because the game’s high-fantasy setting did not mix well with the Middle-Earth setting. Thus, the game was adapted to its own setting, and Tales of Maj’Eyal was born! 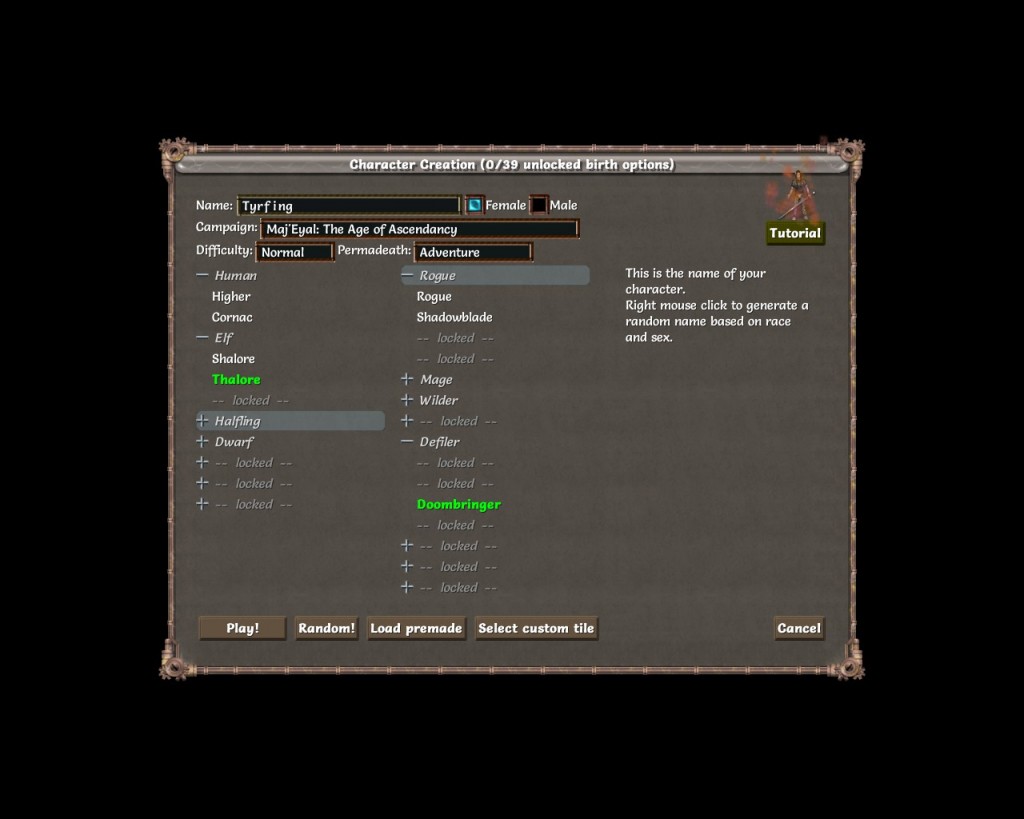 Many options need to be unlocked during gameplay.

ToME is a roguelike that fits into many of its genre traditions pretty nicely. You’re given a simple-to-learn, yet difficult-to-master, combat system. You have many different character options to choose from, and opportunities to modify your character through gameplay. Dungeons are randomly generated, and loot is randomly placed throughout the world. However, unlike other roguelikes, ToME also offers many difficulty settings. As well, the story and setting are rather creative, with each species (and sometimes even classes) having different starting points! ToME is fiendishly difficult, especially with a deceptive learning curve. It is a callback to early roguelikes and is a standout of the genre, as far as gameplay is concerned. 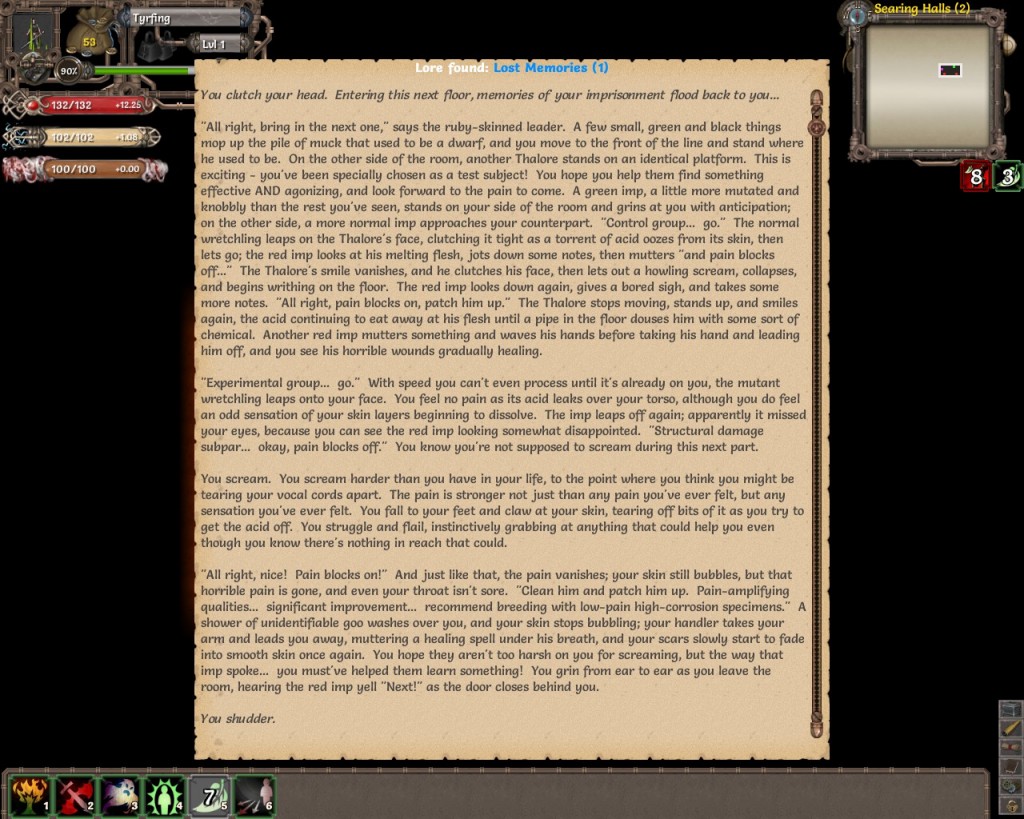 Well-written and interesting backgrounds exist for just about everything.

The artwork of ToME is more than expected for many roguelikes. Beautiful sprites represent your characters and the things they fight and encounter, and the spell effects range from simple to beautiful. As well, the game features environments both standard and unique to fantasy, creating visually interesting environments to explore. Sound effects are rather sparse, but by the standard of roguelikes, you’re often lucky they’re included anyway. The music sounds like typical fantasy adventure fare, and it’s great that a game with such a humble background can include music. The lore of the world is vibrant and creative, with many fantasy tropes being turned on their heads or utilized in creative ways. ToME comes together as a game of artistry as well as good gameplay. 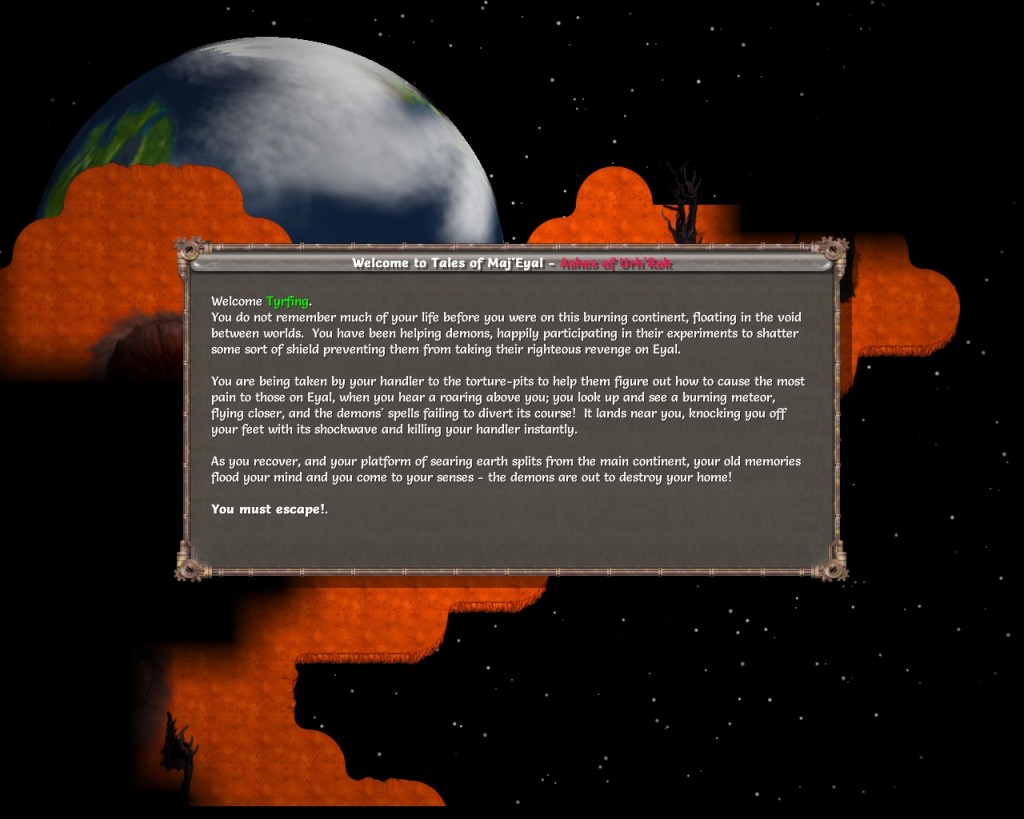 I guess that’s still more believable than adventuring while transgender?

Representation becomes a tricky subject in games that are normally just dungeon crawls devoid of story. Most roguelikes don’t even bother giving characters gender or names, let alone allow for such details as ethnicity and sexuality to show their faces. When your character barely has a personality beyond an opportunistic shyster, it’s hard to find any way to interpret their sexuality and gender. Not that this is an excuse for lacking representation, but roguelikes aren’t known for deep player character personalities. And while you can say your character is what you want them to be, that’s a cop-out all the same due to canon representation being incredibly important. With the effort put into the game’s background lore, you’d think there would be some way to provide more social representation. 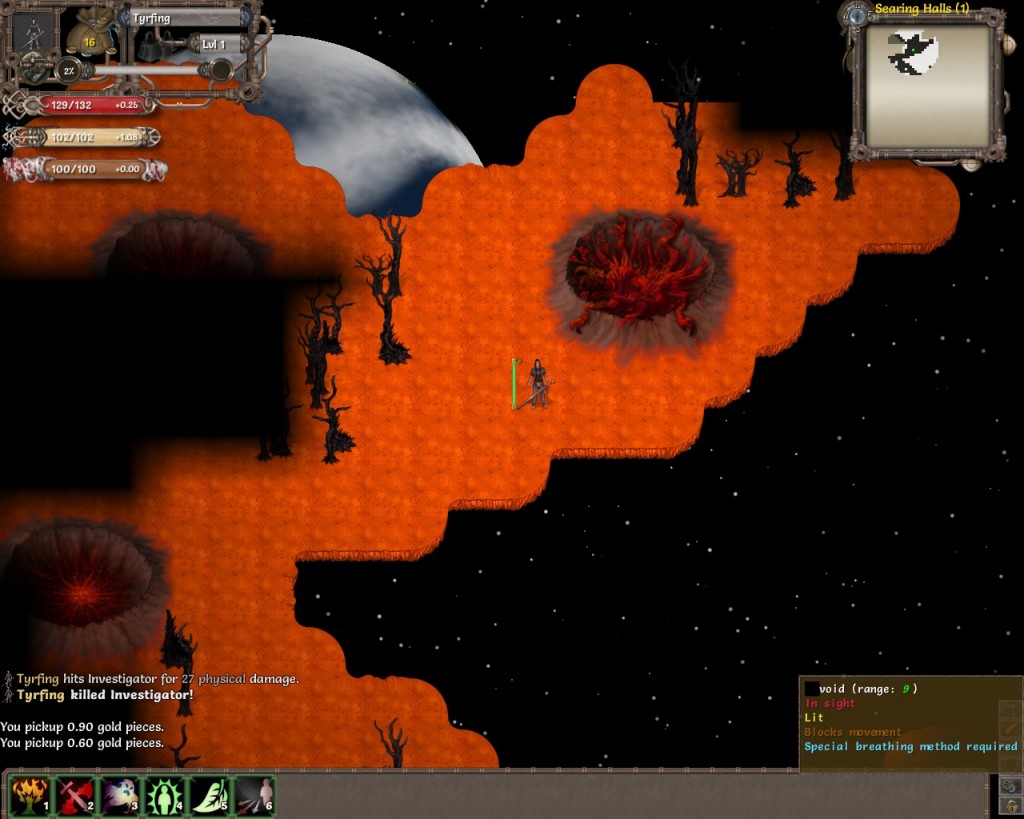 Every species and even some classes start uniquely.

ToME is a good game; however, the question remains: Would I pay money for it? Of course I would! It’s a great roguelike, with excellent mechanics. The visual art is well detailed, a welcome departure from the ASCII art that older roguelikes used. It’s lacking in representation, but that’s a recurring issue in the genre. In all, the game is fantastic; buy it on sale sometime or buy it at full price. It’s well worth the money.

Choo-choo! All aboard the search train!