Some of you may already be familiar with Hirohiko Araki’s popular series JoJo’s Bizarre Adventure. Created back in 1986, this action-packed and borderline insane series has garnered immense popularity in Japan and a niche fanbase in Europe and America for years. As it stands right now, JoJo’s is going through what can be called a revival of sorts. A new television series began airing in 2012 to commemorate the series’ 25th anniversary and has gone about spawning a whole new generation of JoJo’s fans, myself included. It just seems that right now people cannot get enough of this sprawling epic, detailing the Joestar family’s multi-generational struggle against the evils of the world. It’s definitely worth a watch if you haven’t checked it out. 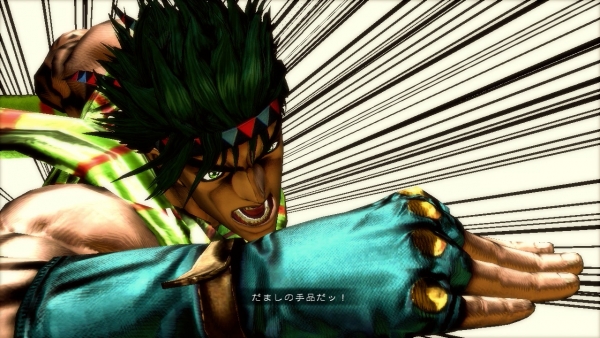 But you didn’t click on this article to hear me go on about the TV series and comics. You came to see if this videogame is worth your time. So, let’s jump in!

If there is one word that can universally be used to describe JoJo’s Bizarre Adventure: All-Star Battle (and the entire series in general), it would be flashy. CyberConnect2 has done a marvelous job recreating each and every character in the game’s 32-character roster (41 if you count DLC characters). Each character is rendered in a stunning cel-shaded style that makes it seem as though they leapt right of the pages of Araki’s manga. Animations for each and every character are fluid and a treat to watch, so much so that some players may be compelled to have their characters simply idle for a while so they can see what pose they will make next. When the fighting actually begins, the entire scene laid out before the players is so visually interesting that it’s not surprising at all for other people to just enjoy watching others play—just to see what wild, high-octane thing these characters will do next. 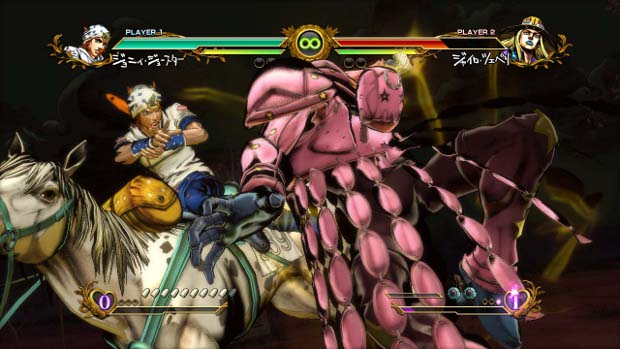 Yes, that man is on a horse. Yes, you do fight people while riding the horse.

What definitely plays to the game’s benefit is how easy it is to pick up. JoJo’s isn’t combo heavy like a lot of other fighting games out there. Much like CyberConnect2’s Naruto titles, it’s very easy for any player to pick up the game and feel as though they are competent at it. The game’s flashy special moves are also incredibly easy for newcomers to execute, with them all being tied to a single button press. This makes JoJo’s an excellent party fighter. Players can enjoy the visual spectacle presented to them without investing a large amount of time into the game. This doesn’t mean that JoJo’s isn’t technical by any means. There are quite a few characters in the cast with some advanced playstyles that fighting game veterans will get at least some enjoyment out of playing. For example, Johnny Joestar above who is only useful while on his horse will definitely appeal to players looking for a challenging character to master. The main issue with the game being such a great party fighter is the fact that only 14 characters in the full roster are unlocked from the start, meaning someone will need to slog through Story Mode to get the rest of them. 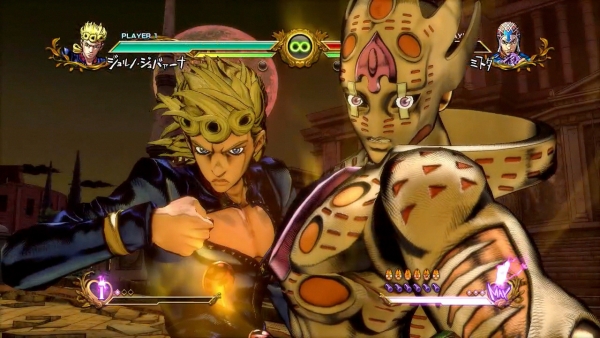 At least it makes the worst arc of the series even shorter.

The Story Mode is what you’d expect. Players will fight through and recreate big battles from the series. While players who already are fans of JoJo’s will delight in having all these scenes play out for them, the players who aren’t well-versed in the universe won’t really have any idea what’s going on. The slides of text that play between matches only offer short summaries of the series, with the Story Mode overall missing out on a lot of the funny moments that makes JoJo’s so great. Players will likely spend a short amount of time plowing through Story Mode to unlock characters and then never touch it again as the rewards for “recreating battles exactly as they were in the series” aren’t really good enough to merit slogging through individual stages trying to perfect the fight again and again. 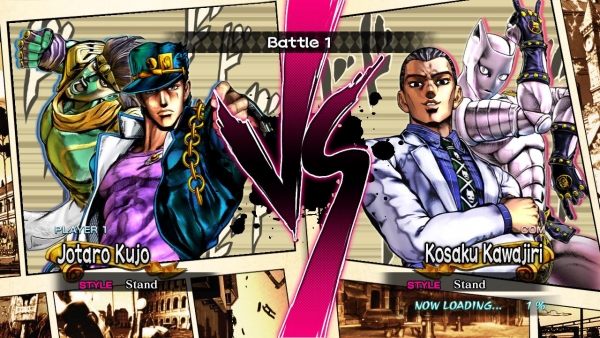 The best part of the game is fighting your friends and anonymous people online anyways.

JoJo’s also offers two modes of online play as well. There’s your standard Versus Mode, where you can fight against other players, and there’s both Ranked and Unranked Matches, which are fun ways to earn customization parts for your characters—which is honestly what the online mode is completely designed around. Then there’s Campaign Mode, which is a good idea in theory but is ultimately bogged down by horrible design decisions. In Campaign Mode, you fight characters modified and sent out into the online world by other players. This would be a fun way to earn costumes and gear as players fight their way though player-created “minions” to try and take down powerful boss characters, hoping they don’t lose all of their HP and get forced to start over. Unfortunately players can only challenge opponents when they have enough Energy. Similarly to Facebook or iPhone games, once your Energy is depleted you can either wait the specified time to let it refill or purchase more immediately through microtransactions. It’s an unfortunate and unnecessary aspect added to what honestly could have amounted to a very interesting Survival Mode.

After all is said and done, JoJo’s Bizarre Adventure: All-Star Battle ends up being a pretty solid fighting game. It won’t win any awards for its depth, complexity, or character balance by any means, but if you’re looking for an enjoyable fighter to help pass the time with your friends, it’s not a bad choice. If you’re already a fan of the series, then it is definitely a solid addition to your collection and without a doubt the best title featuring these characters out there.

The tale about how Daniel reunites himself with Ikari Warriors II, the NES game he sought for almost two decades! The final showdown between his memories and the actual game begins!