Following last month’s look at some of the more mediocre Sonic clones, let’s take a look at the better ones. While the Sonic-esque elements are getting a little thinner on the ground, these games are still well worth a go and easily accessible to anyone with an Internet connection. 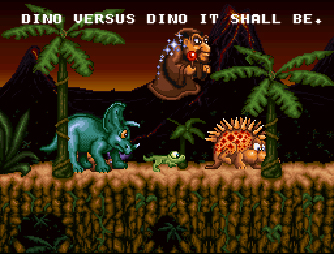 Ah, dinosaurs. I’ve said it before, and I’ll say it again: dinosaurs were crap. No, they were. Big, cumbersome fallacies of evolution that ate each other for ages, then keeled over and died. Worthless. Thankfully, Radical Rex is, naturally, radical. Not only can he breathe fire, he can also skateboard. Show me a stegosaurus that can do either of these things and I’ll eat my game-hat. Yes, I own one. It’s brown.

Anyway, Radical Rex is a fairly bog-standard platformer in terms of mechanics, but the level design is enjoyably convoluted, and some of the locations are quite inventive (you’ll never forget splashing around in a brontosaurus’ stomach lining). There are hidden secrets all over the place to add a sense of reward, as well as a large number of expansive stages—with a great little twist at the halfway point.  See? Unlike last issue’s woeful Awesome Possum, this critter can actually back up his claim of radical-ness. 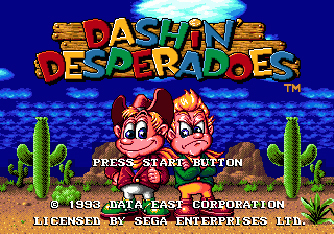 Let’s just get this out of the way—Dashin’ Desperadoes is similar to Sonic in the sense that you run a lot—and that’s it. It’s extremely tenuous a reason to include the game in this feature, but worthwhile, considering that this is the best multiplayer game on the Genesis (besides, arguably, Mega Bomberman).

The premise of Dashin’ Desperadoes is nonsense. Essentially, you and a friend each take the role of a potential suitor for a pixellated sex-bomb, who exploits your male hormonal eagerness by offering a kiss to whoever completes her arbitrary tasks, which usually means a race. Player one appears on the top half of the screen and player two on the bottom, as is customary in these split-screen efforts. First one to the end wins the girl’s heart, but there’s a catch—either player can assault their opponent with all manner of weapons to get there first. Bombs, ice, fire, sweeping kicks or simply rolling over them are fair game. Things get frantic quickly and the game descends into the best kind of chaos and disorder—the fun kind. You’ll shout; you’ll swear; you’ll laugh like a drain. And all over a woman. Ah, adolescence. 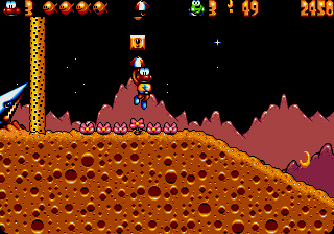 I’m going to court controversy here by stating that James Pond 3 is magnificent, and better than any Sonic game could ever hope to be. Now, if you haven’t immediately stopped reading and set off for my blood, I shall explain why. First, it’s huge. Huger than Sonic 3 and Sonic & Knuckles (in size, if not in scale), and huger than Super Mario World (and with a more interesting map to boot). This game packs in 102 levels, and none of them are lazy repeats of earlier efforts. This game, to put it bluntly, is abehemoth.

In order to finish it, not only must you reach the end and defeat Dr. Maybe (an act which in itself is punishing in its difficulty), you must also destroy all the stiltonium mines (don’t ask, something to do with the absurd plot), rescue the captured agents (one of whom can then be used as a second playable character, adding yet more depth to an already saturated work), find the secret treasures of the moon (which is completely optional) and explore all the secret levels (of which there are several dozen). James Pond 3 is—by far—the best platformer on the Genesis and demands you play it this instant.

Oh, and it’s in this article as a Sonic clone because you run on the walls and ceilings. Like Sonic.  Yeah. 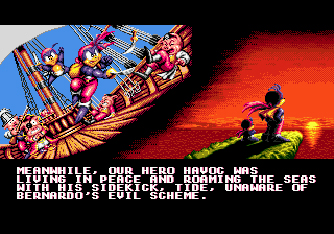 Now this is an obscure one. High Seas Havoc is a Data East platformer that seems to have gone completely unnoticed. You play as a seal (though it has feet), which inadvertently continues our theme of “sea creatures that have no business partaking in land-based frivolity.” This seal runs around various themed worlds, collecting gems and attacking enemies with an annoyingly fiddly “flip-kick” sort of thing. Thankfully, the level design is up to scratch (though the early “Burning Hamlet” stage is rather too hard for its intended audience, with a proliferation of one-hit-kill obstacles) and the graphics are rather gorgeous, with detailed, colourful pixel art the order of the day.

Sadly, the aforementioned flip-kick can be teeth-grindingly inaccurate, with a frustrating lack of precision to it—some enemies seem to be invulnerable to it, and the only way to know which ones is to attempt to strike them. This mechanic sadly screws the game entirely, which is a shame, as many features are quite promising. If you can tolerate it, you’ll have a lot of fun with this one. 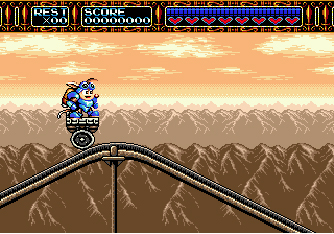 Ah, Rocket Knight Adventures. Without question, this is one of the best titles available for the Genesis. Every level throws out several imaginative variations on the already perfectly solid gameplay, with the easy-to-use rocket pack adding a speedy and fun new method of travel.

RKA (as it will henceforth be monickered) is a game of great scope and full of dangerous surprises—the play style changes on the fly with great frequency, with the little opossum Sparkster leaping into giant robots and tackling horizontal flying levels, much like the developer’s own Gradius (to which this game pays homage in one of the later stages). Indeed, RKA is blessed with a riotous sense of fun that makes every second an absolute joy. Sadly, its sequel, Sparkster (which was released for both Genesis and SNES, but both versions are entirely different) suffered from repetition and bland level design. The SNES version is superior, but still not a patch on the original. Sparkster has also recently re-appeared in New International Track N’ Field (DS) as an unlockable character, alongside other Konami icons. Good to see he’s not forgotten. 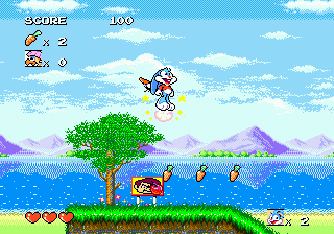 We end our journey through the Island of Dr. Eggmoreau (tenuous, yes, but funny-ish) with a squint at one of the best platformers on a system saturated with them. Yes, Buster’s Hidden Treasure is brilliant. All the typical moves are present and correct, with a nifty slide and a wall-jump added for posterity. The world map is expansive, with at least one secret level per world, and plenty of little caches of bonuses hidden within the areas themselves.

It’s hard to peg why Buster’s Hidden Treasure is so good.  Everything about the elements screams “GENERIC,” but it’s put together so well you can’t help but love it. It’s pitched wonderfully in terms of challenge, beatable by kids but with plenty of scope for a nuanced approach. There are a few too many water levels (nobody likes water levels; if you say you do, you’re a liar and I hate you), but this can be overlooked. Play this game, and play it now.