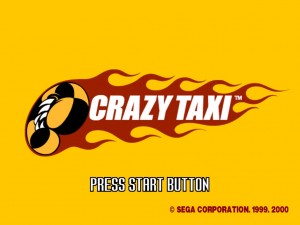 Why am I even bothering to review this? Crazy Taxi is Crazy Taxi. You either know it or you don’t. I can safely say that if you don’t know Crazy Taxi, then you don’t want this version. This version isn’t worth parting with any money for. The closest thing to “bells and whistles” in this port are Avatar Awards, Leaderboards and Achievements.

This is another game likely to sell hundreds of thousands of digital copies because, for some reason, everybody remembers the Dreamcast as being great (trust me, I grew up with it—shit was lackluster). Obviously, I’m not really all too impressed with this release, and that means you are free to scroll down to the score now if you like.

Or, you can listen to an upset Matt Jonas wishing he could have his youth back. Whoopee-do.

Back when I was your age (given that I am imagining you, the reader, to be about ten or eleven years old), the arcades were a thriving and passionate place. I miss that, you know? All we do now is sit indoors, eating hydrogenated, crushed, processed, castrated potatoes that taste like the plastic bag they came out of, playing Call of Duty on our high-definition televisions, as our countries and their governments itch at the trigger finger for a third World War.

The world we live in right now is a fucking awful one. What happened to the good old days? Proper arcades, that is what I’m talking about. They were on the HUGE ferries or at holiday resorts. I’d love to be on the staff in a place like that; I could be the official machine tester! 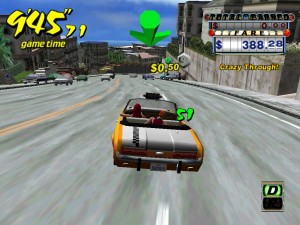 If an arcade was worth its weight in any sort of shiny and expensive metal, you can be sure it  had Crazy Taxi under its roof. But although it was good back then, it isn’t good now. It feels older than it is. Games from that era totally feel old to me, mainly because that was the era when I was most active as a gamer. Games from that time don’t feel quaint to me, unlike someone who was in their twenties at the time the games came out. I grew up with the Nintendo 64 and the Dreamcast, and I know them well. These games are about a decade old or less, and are being re-released with a few stupid new features.

It makes me sick, like the laws in my country concerning attackers breaking into your home. Hell, you have to offer them a fucking cup of tea. We’re not allowed to own guns. I never thought I’d say I was jealous of America, but there you go. Lap it up.

Crazy Taxi, even as a name, just sounds ridiculous. Two words that don’t go together, forcibly combined, like “Microsoft Works.” The sight of this game reminds me of a bingo hall filled with old biddies. I count more than two fat ladies.

What I am trying to say, in my roundabout way, is that Crazy Taxi is the same piece of crap it’s always been. First off, the controls are as uncomfortable as ever. Even after the terrible controls and the truly hideous visuals, the game scores a triple distinction of dishonor by murdering the very soundtrack that made it famous.  They’re the songs that resulted in making this game distinctly memorable. Without them, it just isn’t right.

Crazy Taxi stays a barely faithful port. This is really for reminiscences only. Or for the Achievement Whores. What a load of wank, you’d best stay away and pretend this port doesn’t exist.

This port, in a single word: 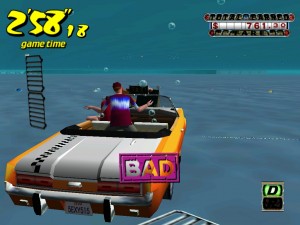 Part 11 of our Danganronpa playthrough is up now! Check it out!