It’s no secret that the success of the Sonic formula opened the floodgates to a host of imitators, with mascot-based platformers almost threatening to drown console owners in the nineties. Many of these followed Sega’s example and gave their characters attitude to spare. Sadly, not too many were successful. Let’s take a look at a few of them and discover where they may have gone wrong…. 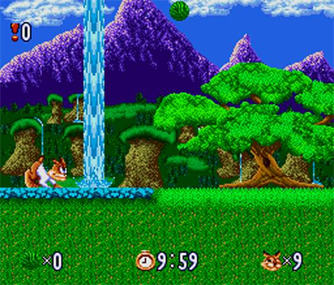 I think we’ll kick off with the most obvious culprit, the risible Bubsy Bobcat. The mangy moggy appeared in four absolute stinkers on various consoles, before justly being put to sleep.

The original Bubsy, titled Claws Encounters of the Furred Kind (spare me), pits our hairball-spewing hero against enormous levels, with the speed of Sonic and the fortitude of sopping wet toilet paper. Brush up against a hazard—any hazard—and Bubsy will instantly pop his clogs. He races around the environments at an extremely high speed with almost no traction, with enemies all over the place to stop you from maintaining any flow and, consequently, having any fun. It feels like Bubsy is in the wrong game. The design requires you to move slowly with great precision, and the controls simply won’t let you.

Thankfully the sequel gave Bubsy more than one hit, but the level design is somehow worse, with terrible flying stages and tiresome repetition. The Jaguar-exclusive game, Fractured Furry Tales, isn’t much better. Bubsy’s final outing was the aptly-named Bubsy 3D, which is arguably the worst game of all time. Quite simply, nothing works. The game conspires to make you angry. All the polygons are flat-shaded, single-coloured blocks. The world looks unfinished. It’s perfectly possible, with little-to-no effort required, to fall straight through the game world into an endless void of poor programming. Something tells me that even the developers didn’t want to work on this game. 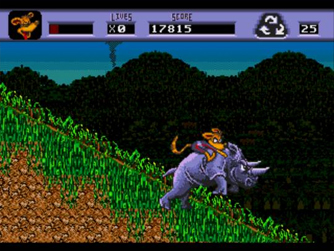 First, a little clarification. Despite his frequent insistences otherwise, no—Awesome Possum is not awesome. He may, however, kick Dr. Machino’s butt at some point. It’s hard to care, as Awesome Possum’s game is so uninspired and gimmicky that it’s a real challenge to beat even one level without losing the will to live. See, Awesome Possum (ugh) never shuts up. Developers Tengen figured that by cramming the game with a metric ton of (admittedly high-quality) sampled speech, they could wow players into ignoring the awful graphics, terrible framerate, sprawling empty levels, brain-hemorrhaging sound, and tiresome environmental message. As Doctor Machino himself says, “You’re not so awesome!” 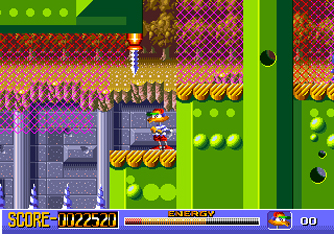 The eponymous creature of this US/Japan-only title appears to be some sort of mutated, sneaker-wearing duck—not a million miles away from Sega’s own Bean the Dynamite, in fact. However, Socket doesn’t waste his time throwing bombs at people or working security; he likes to plug himself into the mains (I am not making this up) and haul tuchus around disappointingly small levels, kicking seven shades out of any robot foolish enough to cross him. The game is inconsistent, with speed-focused levels being followed by ones that require extremely precise platforming, meaning that you can’t simply blast through the thing mindlessly. There are also rather irritating maze stages, in which you’re likely to encounter the same scenery over and over again as you search in vain for the exit.

Thankfully, it’s not all bad. The graphics are serviceable (though Socket himself is deeply unappealing), and the music is rather good—the presentation of the game is reminiscent of the later, greaterDynamite Headdy. Indeed, playing the game is quite enjoyable, with a similar feel to Marvel Land, also on the Genesis.

Overall, Socket succeeds in not being terrible. Its name also succeeds in sounding enough like “Sonic” to trick well-meaning grannies into buying it for eventually disappointed children. Clever, Vic Tokai, very clever. 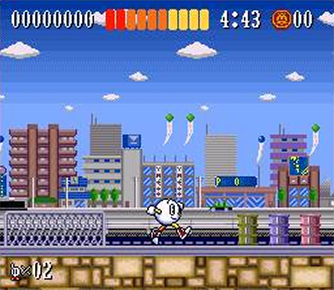 This extremely obscure Japan-only SNES game has you controlling a cross between Dizzy the Egg (ask your dad) and Sonic, alternately crawling at a snail’s pace and hurtling at an uncontrollable velocity through stilted, poorly-designed environments. The influence from Sega’s flagship insectivore is clear, as you curl up into a ball, fly around loops and roll across the ceiling. Unfortunately, the developers (Coconuts Japan, who apparently drew the short straw where monikers are concerned) forgot to steal the excellent handling that makes the Sonic games so darn playable. What we’re left with is a game that looks the part, but fails miserably to live up to the standards of its predecessor. 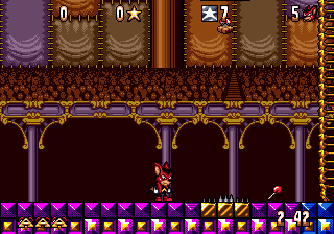 Aero is a Sonic clone in appearance only—the actual gameplay is vastly different and more methodical than that of our blue hero. That isn’t to say that it’s bad, by any means. While the Aero series is patchy, there’s definitely a lot to love.

The first game in the series (simply titled Aero the Acro-Bat) is an excellent little platformer with plenty to offer. See, Aero has to do more than simply get to the end of the level. Sometimes he’ll have to jump through a certain number of magical hoops, or turn on all the lights in the level, or find a key. The variety of the missions on offer keep the game interesting, with an exciting ride on the “Rotor” being a definite highlight.

Graphically and sonically the game is solid, but a ridiculously high difficulty level scuppers the whole experience—though this is fixed in the excellent, if bug-infested, GBA version. The sequel removed the mission-based gameplay and made for a rather dull experience, while series spin-off Zero the Kamikaze Squirrel (who comes up with this nonsense!?) offers chop-socky fisticuffs to go with the rather rudimentary platforming. However, all three games are certainly superior to the above offerings. 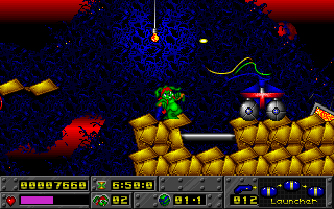 Ahhh, Jazz. The home computer’s answer to Sega’s console miracle, Jazz Jackrabbit is quite simply an excellent game. The original DOS platformer combines the speed of Sonic with the blasting action of Duke Nukem and the platforming of Mario, managing almost miraculously to blend these disparate game styles into a product that’s not only coherent, but great fun to play. Jazz dashes between planets across several episodes, hunting down the evil Devan Shell who has, in typical platformer villain style, abducted Jazz’s girlfriend. The game was followed by a sequel for Windows, which is more or less the same thing with bells on. A much higher resolution and smoother graphics are on the plate, as well as three playable characters and a level editor. Later, a GBA version was released, but this is absolutely nothing like the PC originals and is best avoided.

Well, there we have it. I’m aware that this is by no means exhaustive, but at least we’ve scratched the surface. It must have been eye-opening for Sega to see the impact that the Sonic franchise had on developers and gamers alike. While none of the wannabes quite attain the level of quality that made the original shine, a few of them are worth playing, at the very least. Consider checking a few of these games out while I prepare a second volley. If you’d like to see another popular series’ bare-faced clones covered, drop me a comment or e-mail with suggestions.

Rag Doll Kung Fu: Fists of Plastic is essentially a party game. The first option listed on the menu is "Multiplayer," and the game only reaches its full fun potential when you're playing with friends