If you’re reading this, chances are good that you’re literate. Chances are also good that you only chose to read this because the name “Willy Beamish” made you giggle; few people have heard of The Adventures of Willy Beamish and lived to tell about it. At least, that’s my assumption, because there’s apparently a good many ways to die in this game. If you’re a fan of Space Quest, Quest for Glory, Beneath a Steel Sky, or any other adventure game where it’s possible to die in colorful, creative ways if you do something brilliantly stupid, then these Adventures of Willy Beamish videos might just be for you. 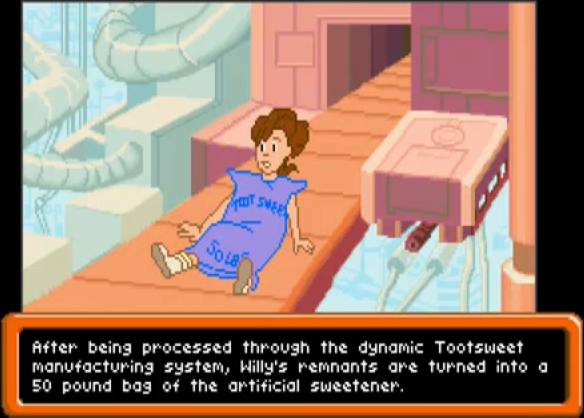 We’ve got two collections of death/game-over sequences from the cartoony 1991 adventure game about a plucky child who, from what I can tell, needs to win a frog jumping contest to score a date with the attractive new school nurse, who is being extorted by these two soap opera rejects who control the local bullies and gangs. Willy’s dad is in cahoots with the soap opera rejects, but after accidentally letting loose a crazy pet bat, the soap opera rejects decided to drop him into a pool of acid for his incompetence. From the look of it, Willy’s mom, the CEO of a sugar factory, would have done it herself if she’d had the chance.

Anybubbles, you can piece together exactly what’s going on for yourself as you watch poor little Willy Beamish get processed into a bag of sugar, drowned in a treasure chest at the bottom of the ocean, fall into an alternate dimension, and other heartwarming things. Also, there’s a strange video of a Duke Nukem wannabe stumbling around on a stage because he’s been drinking “cola.” Have fun with all that, but remember that you really came here to watch Willy get dissolved in a vat of acid.

Normally at this point I’d tell you to watch the whole Willy Beamish playlist on the GameCola YouTube channel, but that’s totally unnecessary, so I won’t. (Go watch the whole playlist; Paul Franzen and Michael Gray actually go to the trouble of playing through the whole game for you.)

Via GamesRadar, there's a new app for Android that lets you play Pac-Man in the real world. Dubbed Pac-Map, the game uses images from Google Maps to create a Pac-Man maze in your current location, and