Perhaps you were at the wrong place at the wrong time, or perhaps you were committing a victimless crime, or maybe you were even planning on doing something that could land you a fine or a prison sentence. Whatever the case, you were picked up by the authorities, surrounded by criminals both hardened and petty. Caught between traitors and thieves, you sit as they take you to the location you believe to be your processing—however, it turns far darker. They seek to make an example of everyone they’ve caught in this group, including the leader of a rebel coup. With the last kind words said, the soldier processing the prisoners looks at you and realizes something’s wrong. However, he cannot go against orders and so asks, “Who are you? Where are you from? What’s your gender and pronouns?” Perhaps, perhaps your only crime today was to simply exist on the same path as a corrupt authoritarian. 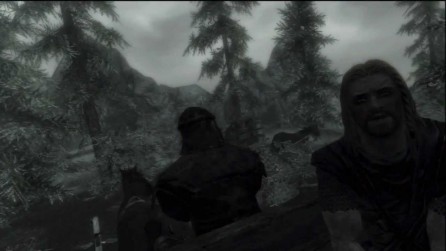 Like being transgender, Skyrim begins right before your life ends.

The Elder Scrolls V: Skyrim continues a long-lasting tradition of many Elder Scrolls games in allowing you to create and customize your own character and then being let loose in a sandbox world, telling you to take your time. In this entry, you play the Dragonborn: An individual with a mysterious past and even more mysterious purpose, destined to save Tamriel from the ever-looming threat of dragons risen from their graves. However, that’s not the real story of the Dragonborn, only the basic plot of the game. The story truly lies in what you do alongside and outside of the main quest, and that’s where I picked apart the narrative of the game to find something inspiring. In many ways it’s about being transgender. 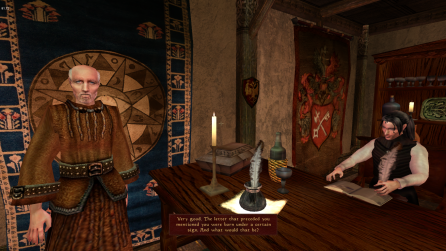 “Just fill out the forms, I don’t care where you’re from, how old you are, or what your gender is.”

As many Elder Scrolls games start, you’re in prison. Either freshly arrested, serving your sentence, about to escape, or just released; you’re a criminal, and one society doesn’t appreciate. In Skyrim, you’re under arrest for charges that are never explained, which often happens to transgender people. Charges are perhaps trumped up, and we’re brought in on technicalities or a three strikes law. Perhaps we’re doing something illegal which isn’t enforced, and that’s cited as cause of arrest. Or maybe we’re doing something that is illegal, but the punishment differs based on the demographic committing it. Transgender people are forced to commit crimes in life, that’s a fact. Either our existence is technically illegal, or our need to survive puts us under criminal scrutiny. Whether it’s because we’re finding a less-than-legal way to take medications we need to survive coping with mental illness, physical pain, or dysphoria; or because we do illegal things such as sex work and distribution of illegal drugs to survive, because in many places it’s legal to fire a transperson just for being trans; or even just because we’re homeless because it’s legal to kick a transperson out of their domicile just for being trans. That we can be imprisoned, often simply for existing and trying to survive, puts us on a relatable level with the Dragonborn and other Elder Scrolls player characters. 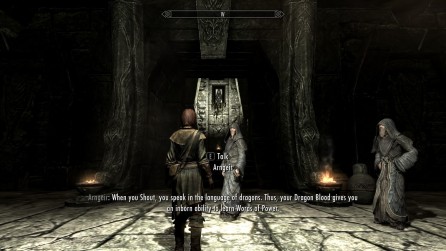 Sometimes it seems like there’s a secret language to being transgender.

The main quest of Skyrim is also very evocative of the trans life, particularly just discovering you’re transgender. At first, the quest to be the Dragonborn and save the world seems to be too fantastic to be based around something real. However, at the core of it, you’re supposed to be learning how to control your voice, learning new words to use with your voice, and learning ancient and forgotten history surrounding who you are. This corresponds a lot with discovering you’re transgender, and the journey that is your identity. Obviously, learning how to use your voice corresponds with learning how to adjust your voice’s pitch and depth to better fit the sound you think it should be making. Learning the new words off the Dragon Walls corresponds with learning new terms to describe yourself, fine-tuning your vocabulary with what’s accepted, and how to best communicate these ideas. And the forgotten history that you learn corresponds with the forgotten heroes of the pride movement. Transgender people are the unsung heroes of the LGBT movement, erased at every turn from everything we’ve ever done. Being trans is the main quest of many people’s lives, even. We’ll meet important people along our way, learn things about ourselves, and ultimately save our own world from an existence we can’t survive without transition. 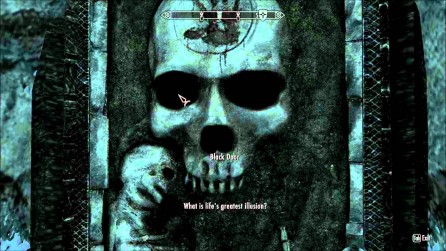 But, it isn’t just the main story that holds hints of the life of being transgender! The various guild quests correspond with various aspects of transgender life. The first guild you probably come across is the Companions, a group of warriors who follow the hero Ysgramor, that all hide a secret identity. They’re all werewolves and change underneath the light of the moon, which bears striking similarity to how many transpeople choose to closet themselves in their daily life to survive, and how they change who they are once the sun sets and it’s safe, as well as how their existence is forfeit if their secret lives are discovered. Perhaps it’s in the thieves guild instead, forced to break the law to survive? Just as well, the bad luck that exists and plagues the guild could be representative of how many transpeople seem to live in perpetual bad luck (though there is no Nocturnal to appease in reality, I am afraid). Even more, there’s an importance in the betrayal of Mercer Frey, showing that even people you think are your friends will betray you for personal gain.

The Dark Brotherhood seems to have little in common that’s not covered in the thieves guild, right? While it is true I can also remind you, again, that transpeople must do questionable acts to survive, I have a different angle. The Dark Brotherhood is a representation of the transgender community similar to the Companions. However, unlike the Companions, there’s less acceptance here on a certain level. Everyone’s rather wary of you; there’s hoops you have to pass through. Eventually, once everyone’s satisfied, they welcome you as family and you become important and prominent. This is socializing around the community and gaining a voice among your transgender peers. Winning the respect of Astrid and becoming the Listener represents becoming a prominent member of the community, regarded as even a voice for your peers, something that happens with many transpeople once they get involved. Astrid’s betrayal represents the reality of being transgender: Sometimes even other transpeople are your enemies, resenting your success in these newfound places.

More parallels are possible to be drawn between the guilds in Skyrim and transness as an experience; the Bard’s College and the Winterhold College both are initially about taking advantage of an institution’s rules and traditions to get what you need, as well as discovering either new facts about being transgender, or about discovering the secret history. However, especially with the Winterhold College being much more fanciful, connections can be rather slim. Perhaps even that’s part of where both these factions intersect with being transgender: sometimes it’s not going to be easy to connect your reality with your fantasies. 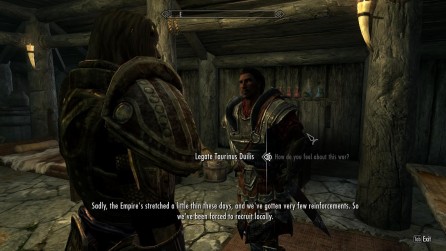 “I know we tried to kill you, but hey, bygones are bygones; now help us cement our legitimacy!”

The Imperial and Stormcloak quests both seem to fall into how fantasies don’t match up with reality, just like how the Bard’s College and Winterhold College do, right? Probably not, actually, as they represent how political entities try to utilize transgender issues for their own political agendas. The Imperials and Stormcloaks both want you to cement their legitimacy—a tactic that occurs on a certain level in real life. Political movements that seek to exploit being transgender pop up all the time. A Human Rights Campaign board member did state that transinclusion in their politics would happen “over my dead body”, which seems to, you know, contradict with the whole “Human Rights” thing. While they seem to have changed their mind now, that sounds a lot like the Imperials deciding they need to execute the Dragonb0rn and then deciding that the Dragonborn is exactly who they should be working with. Especially the Stormcloaks, though, with the way Ulfric speaks and the causes he cites, it sounds like the whole war is a bid for power. This is a more insidious form of the Imperials, where you know they’re trying to cement power and at least they’re honest about it, and like the HRC at least we know where their priorities lie. The Stormcloaks are like campaigns such as FCKH8, which is an apparel company selling LGBT-themed merchandise without actually assisting LGBT causes. Regardless of which organization you side with, both exploit you, and that’s a part of transgender life. 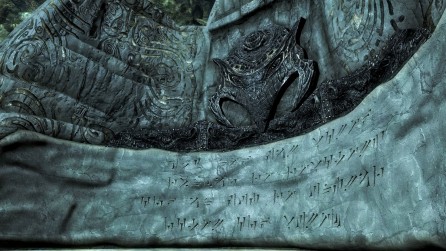 Talk about walls of text!

Sitting down for a few online matches can be a fun way to relax after a hard day at work or school. But it's hard to avoid getting even more frustrated when we have to share our games with idiotic pla