A lone figure sits at a computer desk, looking at their Steam library. A critically acclaimed indie RPG is sitting there, no explanation how, and there’s a few comments making grand comparisons. Compared to popular RPGs from the past, a legacy which endures in the hearts of fans to this day even, the game is booted up, and the title screen appears. 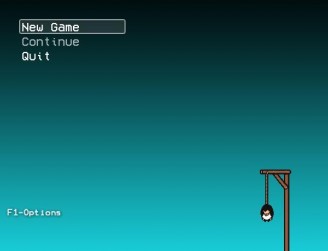 A young boy, beaten by his peers walks home. Greeted by his father, and then by a beer bottle to his head, he slowly walks upstairs. Upon entering his room, he climbs onto his soiled mattress and cries himself to sleep. Flash forward an indeterminate amount of time, a bearded man sits cross-legged, pondering flashbacks from his youth. He pops a blue a pill, and the flashbacks are gone. As he walks, he finds a curious thing. A baby on the ground—most curious because there are no women left in the land of Olathe, the apocalypse simply making them vanish. The child is a girl, and this man vows to protect her for his whole life. That is, until one day she’s been found, kidnapped by the Rando Army. Thus begins your journey to rescue her. But are your intentions as pure as you like to believe, and do you really deserve any of this at all? 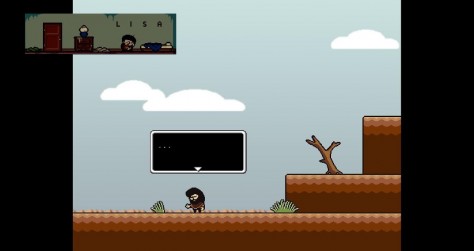 “The flashbacks are at it again.”

LISA, also known as Lisa: The Painful RPG, is a 2D side-scrolling RPG created using RPG Maker, and a sequel to the similarly-titled RPG Maker game, Lisa: The First. The game follows the story of Brad Armstrong as he travels the post apocalyptic wasteland of Olathe in search of his missing daughter, Buddy. The game utilizes strange mechanics, quirky combat, and unusual level design to distance itself from other RPG Maker games. Lisa also separates itself through its graphics not at all resembling what’s available by default in RPG Maker. The story is incredibly dark, and while sometimes you forget that fact, Lisa is quick to remind you. In all, this is definitely not the sort of game you would expect, knowing its roots, and almost everything in it comes at a complete surprise. 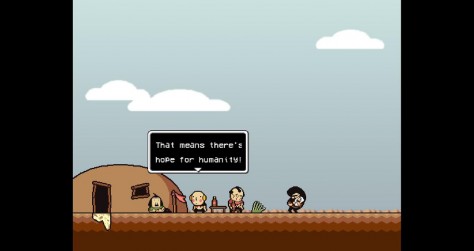 If there’s one thing left in Pandora’s Box…

The art of Lisa is truly amazing, from writing to music to even the graphics themselves. As mentioned before, we have Brad Armstrong trying to rescue his daughter from a post apocalypse warlord. Struggling with addiction and making friends along the way, he sees the true extent the world has decayed to and is faced with horrific choices as he attempts to save her life. The music is fantastic, all performed by Widdly 2 Diddly, and effectively frames the scenes you come across in this desolate wasteland. The sprites are all detailed, distinct, and well-designed, making the game a beautiful experience. Lisa is, in all, a beautiful game with great artistic qualities to it that place it ahead of even AAA titles! 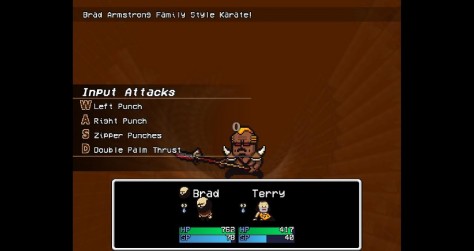 Combat is a little unusual.

The game is mechanically brilliant, with an amazing goal it seems to meet head-on. The first thing you notice is that the game side-scrolls; unusual in for the RPG genre. Combat looks like your standard menu-driven RPG until you select the main character (or any number of side characters) who have “input attacks”: combos that are entered to execute special abilities. Puzzles in the game world vary from fetch quests to performing certain actions—sometimes, even not doing anything will solve a puzzle. And the most infamous part of Lisa is the choices! At key moments of the game, you’ll be tasked with sacrifices to make which have lasting repercussions. All of this makes Lisa a unique game that shows what can be accomplished with RPG Maker by talented minds. 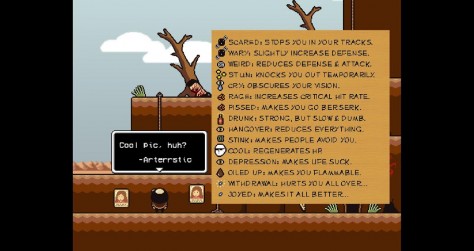 Unique status effects add to the experience, and hearken back to an earlier classic.

Dwelling upon the story a little, Lisa truly knows how to tug at your heart strings. It asks what you’re truly willing to sacrifice to do what you set out to do, and it doesn’t make these sacrifices easy. However, the worst isn’t even the choices but the flashbacks you encounter. Brad had a really bad childhood that shaped who he is today. Through the game, you’ll relive moments from his childhood and adulthood, whether they’re moral failings or tragedies. There’s a darkness to this game that hangs just over your head, and the ability to draw out a player’s emotions truly makes Lisa a masterful story.

Everything’s not all roses, I’m afraid.

Lisa is a mixed bag of inclusivity, to be honest. Characters come from all races and backgrounds in life, with a surprising amount of racial diversity. There’s a good mixture of body types and skin colors, and there are even people with disabilities. However, things get rather tricky after this. The game makes no mention of how the apocalypse treats transgender people, never addressing if transmen survived the apocalypse or if transwomen vanished with the ciswomen. As well, there’s only three women in the whole game, and two of them start off dead. And with regards to transwomen, the game features a colony of drag queens—which is not even close to transgender representation, and definitely not transwoman representation. Honestly, it feels like a jab at transwomen who do not pass, and that’s not cool. There are also mentions of rape throughout the game, implications of rape being performed on other characters, and the aforementioned depictions of child abuse and drug addiction. The game’s got problems, and plenty of content which may disturb players, but I wouldn’t let that dissuade you entirely. 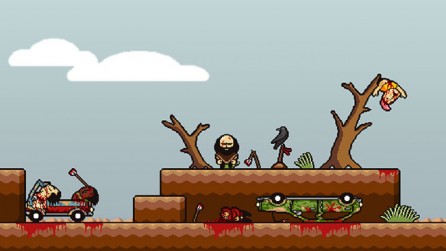 Here it comes: Do I recommend the game? I…I am conflicted. I feel the game is fantastic on many accounts, and definitely should be experienced. However, as the story progressed, it became harder and harder. Decisions are difficult, sacrifices must be made, and in the end? Well, I would say spend money on it, play it a little, but…watch someone else make all the hard choices. If you feel the need to play through it all, well, at least it’s over fast. The game’s powerful, and I can’t say skip it, but this isn’t for the faint of heart.

Okay, so chances are that WrestleMania XXI has come and gone by the time you've started reading this article. This latest issue of GameCola was only released the day of the big event, so one way or an ...