Nancy Drew: The Model Mysteries came out four months after the book trilogy, and it is a real mess. The game, that is. The trilogy is a mess, too. I guess it’s just bad luck that the game developers picked the worst trilogy to date as the one to base their game on.

Primarily, this game is a visual novel. It’s a very minimal visual novel, with only one piece of artwork per character. I’d say most of the artwork is fine, but there are some minor weird points. George looks like she’s twelve, not eighteen. Josh’s artwork was put in even though he has no lines. And Nancy is wearing glasses, even though she doesn’t have glasses in the books or even on the game’s cover. 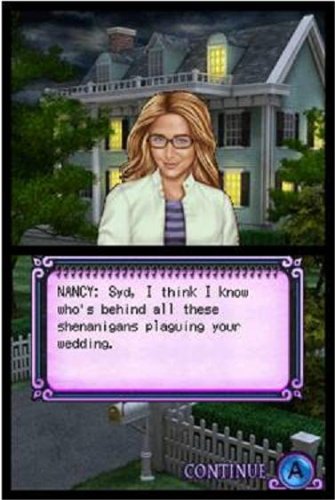 I disliked the game’s dialogue from the very start. That’s because there’s a glaring typo on the second screen. Not a good way to start your visual novel! It didn’t take long for me to realize that 90% of the dialogue is taken directly from books. Is this because of laziness, or dedication to the source material? Either way, it’s not an effective strategy here, because the books are not particularly well-written. Expect to see at least four characters appear without an introduction, only to disappear completely after two sentences.

It was a good idea in theory, but a bad idea in practice. Half the time, the suspects ignore your question and talk about some other random thing. Also, you have an arbitrary limit of three questions. If you want to hear all nine conversations, you’ll have to replay the game. Twice. Why would you purposely cut off two-thirds of the dialogue options in a visual novel? That seems contrary to the genre.

Oh, well. It doesn’t matter that you can’t question everyone thoroughly. You learn absolutely zero clues from questioning the suspects, probably because the questioning scenes weren’t in the books. 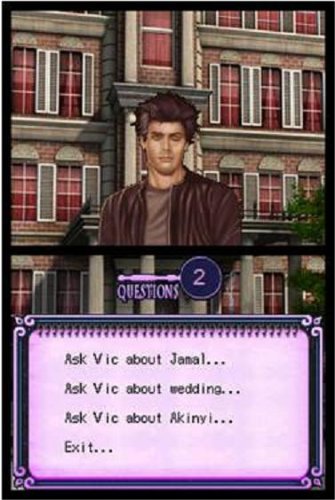 Besides for the visual novel parts, we have hidden objects challenges. This definitely would have worked better if it wasn’t a DS game. The touchscreen on the DS is too small; it’s about a sixth of the size of the hidden objects scenes. It’s almost impossible to find everything when you can only see a fraction of the screen at a time.

The hidden objects challenges also come with a time limit. If you can’t find everything within three minutes, the puzzle resets with a new group of items for you to find. Any mistakes will cost you four seconds. Once or twice, I tried to move the screen around and the game registered that as me making a mistake. I found that annoying.

I should note that it takes about three seconds for any object you find to register on the top screen. So really, the time limit is more like two and a half minutes, not three.

Okay, so the hidden objects scenes were awful. What about the rest of the gameplay? There’s not much of it, to be honest. We have a repeat-the-pattern puzzle, and several puzzles where the solution is “slide the stylus in a particular direction”. There is a side-scrolling challenge, where you move Nancy up and down to avoid obstacles, although nothing happens if you hit them. The best challenge was probably the wedding word scramble. 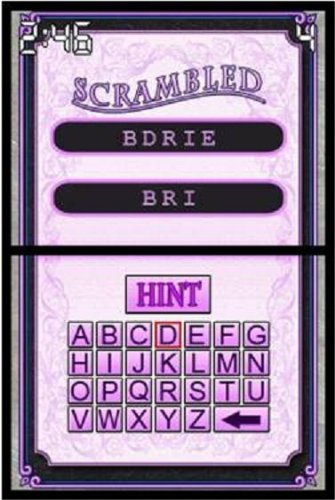 Since this game is based on a book trilogy, it’s split into three parts. At the end of each part, you are challenged to guess the culprit’s identity. You have a one-in-six chance of getting it right. If you’re wrong, the game makes you restart from the beginning of that part. Harsh. Especially since it’s almost impossible to guess the culprit’s identity if you haven’t read the books. Because, ha ha, the game skipped over some of the vital clues to the mystery.

Overall, this is a bad licensed game based on bad source material. Sadly, that can happen when your game-making criteria is “what book is most recent?” and not “what book would make the best game?”. If this game had been based on better books, it would have been more tolerable—although no matter what way you look at it, it’s a lazy visual novel with no script editing, as few graphics as possible, and frustrating hidden objects scenes that weren’t designed for a DS.